Indigenous groups were blindsided by federal Water Minister Keith Pitt when it was revealed in a Senate hearing on Friday that he had rescinded responsibility for a promise, already delayed three years, to return water rights to First Nations people along the Murray Darling River. 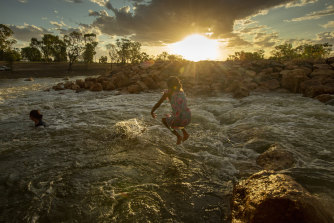 After three years of consultation the government has not delivered any funding for water rights, nor a schedule for future delivery. Murray Lower Darling Rivers Indigenous Nations chairman Grant Rigney said he was “really disappointed and we’re gutted”.

“It should have been a common courtesy from the minister’s office to notify us, but we heard through it through a media statement. It’s a handball from the Department to NIAA, and the Department hasn’t acted on it for three-and-a-half years,” he said.

Former chairman of Northern Basin Aboriginal Nations, Fred Hooper, who participated in consultation over the program until recently, said he was “shocked and disappointed” by the news today.

“Now it’ll be wrapped up in so much bureaucratic bullshit it’ll be 50 years until we might get any water.”

First Nations groups had no prior warning of the move, which was revealed by Senator Anne Ruston, who represented Mr Pitt in the hearing.

No consultation was undertaken with First Nations groups by Ministers Pitt and Wyatt nor the Water Department before the move, which was revealed under questioning by independent Senator Rex Patrick and Labor Senator Deb O’Neil.

Former Water Minister David Littleproud pledged $40 million in 2018 to purchase water rights for Aboriginal peoples across the basin, to be split evenly between the Northern and Southern Murray Darling Basin.

Murray Lower Darling Rivers Indigenous Nations wrote to Mr Pitt in April asking for the fund to be delivered and assurance the money would not be re-purposed to non-water assets.

Mr Pitt said the government was “firmly committed” to the program and NIAA was well-placed to deliver it.

“This arrangement provides a good model for the government to deliver on its commitment in a way that helps Murray-Darling Basin Indigenous communities realise economic, social, cultural and environmental benefits,” he said.

Senator Patrick accused the government of “absolute incompetence” when after repeated questioning Senator Ruston confirmed that the program had not delivered any funds.

“I know you don’t want to answer Minister,” he said, “but there’s no excuse for the incompetence that sits behind that answer.”

“It’s just another case of this government being all announcement, no delivery,” Ms Butler said.

Senator O’Neil said it was “outrageous” that “after three years of waiting for zip the money gets shifted”.

The delay to Indigenous water rights contrasts with the federal government’s snap announcement in November 2019 of a $100 million fund to subsidise irrigators buying water during an extended drought.

First Nations groups say they were dispossessed of their traditional rights since colonisation and the creation of markets that allocate access to shares in water resources.

Across the Murray-Darling Basin, 44 First Nations groups share just 0.12 per cent of the water market. Their 64 entitlements give them rights to a cumulative annual water take of 13 gigalitres, worth just $15 million, while the total market is valued at $16 billion.