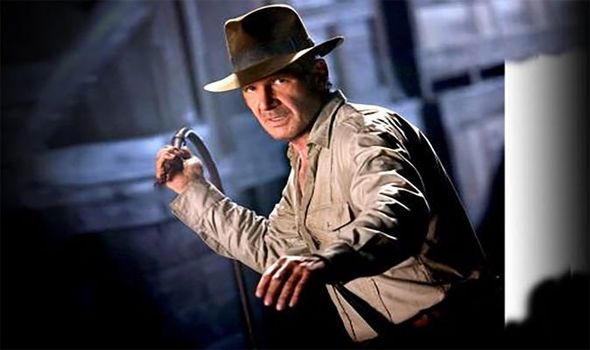 With bullwhip in hand and weathered face beneath his trademark fedora, Indiana Jones roars back for a fifth big screen adventure next year. Harrison Ford returns at the venerable age of 79 to play Dr Henry “Indiana” Jones, the US academic whose quest for ancient artifacts has pitted him against murderous Nazis and the KGB.

Through four blockbuster films the daredevil archaeologist has risked life and limb in pursuit of the Holy Grail, a mystical Indian gemstone, and a telepathic crystal skull.

Yet Indy is best remembered for his first, and perhaps most ambitious treasure hunt, searching for the Ark of the Covenant in the classic 1981 film that launched the lucrative franchise: Raiders of the Lost Ark.

But the inspiration for Indiana Jones’ greatest adventure came from Edwardian British nobleman Monty Parker, whose mission began with a dare from millionaire socialite Ava Astor, famed as “the world’s most beautiful woman”.

Parker, the second son of the 3rd Earl of Morley, led a 1909 expedition to Jerusalem in search of the lost Ark of the Covenant, aided by a motley crew including a psychic, a Dominican monk and an Old Etonian cricketer.

“It was a rag-tag group of misfits, English gentlemen and eccentrics, ex-soldiers and psychics, without an archaeologist among them,” says Brad Ricca, author of True Raiders, a new book about their exploits.

“Finding the Ark would have been the most spectacular historical discovery ever. They were treasure hunters: the real raiders of the lost Ark.”

Unlike Indiana Jones, the British expedition didn’t face snake-infested catacombs or German U-boats, but Parker believed he was close to finding the Ark, and might have succeeded if he hadn’t been forced to flee for his life – much like Indy – pursued by a mob howling “Death to the English!”

Their adventure began when Parker, veteran of the Grenadier Guards and Boer War, met Finnish scholar Dr Valter Juvelius, who claimed to have found a secret code hidden in the Bible that revealed the Ark’s location.

“Using a cipher that highlighted every seventh word, with complex adjustments, Juvelius found passages in the Book of Ezekiel and in noncanonical scriptures revealing that the lost Ark had been hidden 3,000 years ago by King David in a walled-up tunnel beneath the site of the Temple of Solomon in Jerusalem, now the site of Islam’s holy Dome of the Rock.”

Parker was in love with the fabulously wealthy divorcée and society beauty Ava Astor, who urged him to pursue theArk with the enticement of marriage.

“Bring me back theArk of the Covenant… and perhaps we’ll talk again,” she teased.

“Parker had few prospects, and knew that finding the Ark would bring fame and fortune, and might win Astor’s hand in marriage,” says Ricca.

He threw himself into the expedition, raising funds in Britain and America, and the Ark was such a prize that he had to turn investors away.

The expedition negotiated digging rights with the Turkish – h gatqsw government that then controlled Palestine, and in 1909 began to excavate just outside the walls of Jerusalem. They disguised their quest by telling locals they were building schools and hospitals. Their quarry, however, was mythical.

“The Ark of the Covenant is portrayed in the Bible as immensely powerful, making armies invincible,” says Ricca.

“It was said to contain the Ten Commandments handed down to Moses by God, or alternately Aaron’s rod. Carried on long poles, anyone who touched it instantly died, according to legend. Parker thought it might be worth £200million a century ago.

Today it would be priceless.” After months of laborious digging in the Kidron valley on the slope of Mount Ophel just outside Jerusalem’s walls, clairvoyant Otto Von Bourg suddenly announced to the team that the Ark was instead hidden on Mount Ararat, where Noah’s Ark had landed. The expedition leaders immediately banned him from speaking further on the subject.

Biblical historian and Dominican monk Fr Louis-Hugues Vincent joined the expedition, and was delighted by finds of ancient pottery shards, but the British grew increasingly frustrated as the Ark eluded them.

Yet a labyrinth of forgotten tunnels and shafts beneath Jerusalem carved out 1,000 years before Christ offered the possibility of success.

‘I Parker discovered the Ark..he still to “They were used as aqueducts, for military purposes, and perhaps for hiding treasures,” says Ricca. “Parker’s team excavated an ancient tunnel from the Gihon Spring to the Pool of Siloam, discovering hidden tunnels – but no lost Ark.”

After almost three years of digging they had discovered a few ancient tombs, and a magnificent throne room that turned out only a commode. With their digging lease running out, Dr Juvelius pointed to decoded Bible passages that suggested a third tunnel route to the lost Ark directly beneath the Dome of the Rock on Jerusalem’s Temple Mount: a place so holy to Muslims that infidels had been killed just for entering. “Parker bribed the Dome’s watchmen, taking a crew of 12 men disguised as Arabs into the holy site to dig after dark,” says Ricca. “Just like in The Raiders of the Lost Ark film, they dug in the Well of Souls, a cave beneath the Mount where the ground seems to echo from tunnels hidden below.”

For nine nights they dug into ancient tunnels, until they were discovered, prompting outrage among the locals.

“Protesters rioted through Jerusalem’s streets screaming for the Englishmen’s blood,” says Ricca. “They were accused of pillaging Biblical treasures. Locals claimed they’d stolen the Ark, and Mohammed’s sword, and Aaron’s rod, and practically every Biblical treasure except the Holy Grail.”

The expedition fled the country, reportedly hauling away two large bags. “They escaped with some treasures, but we don’t know what,” admits Ricca.

“I visited Parker’s family estate, Saltram House in Plymouth, just in case he was using the lost Ark as a coffee table, but I found no trace of it.”

At the time, Parker protested: “I assure you that I have taken away nothing.”

Dr Juvelius claimed 10 full boxes were seized from the Brits’ getaway yacht by the Turks, and taken to Malta. If the Ark was among the haul, Parker never admitted it.

But questions remain. “I think Parker may have finally discovered where the Ark was hidden,” says Ricca. “Even after being chased from Jerusalem he wanted to return immediately and continue digging under the Dome of the Rock. But no one has been allowed to dig there since, which makes it all the more tantalising.”

Six decades later in 1974, film director George Lucas was toying with the idea of a movie about a 1930s archaeologist searching for supernatural treasure. Screenwriter Philip Kaufman suggested theArk of the Covenant, Steven Spielberg came on board to direct, and Raiders of the Lost Ark was born. Parker’s expedition may have come up empty-handed, but it did lead the way for archaeologists a century later to explore the caves and tunnels they had excavated.

Researchers following Parker’s trail in 2017 discovered the lost Citadel of Siloam, which had been captured by King David in his conquest of Jerusalem three millennia earlier.

The second book of Samuel reveals King David captured the walled city through an entrance in a water shaft: the tunnel excavated by Monty Parker.

Or perhaps the real treasure was found by Indiana Jones’s creator-writer-producer George Lucas, whose franchise has earned almost $1billion, with plenty more to come next year. As for Parker, he didn’t get the treasure or the girl, dying unmarried as Lord Morley in 1962 aged 83.

And the Ark of the Covenant, if it still survives, lies hidden waiting for another reallife Indiana Jones to find it.