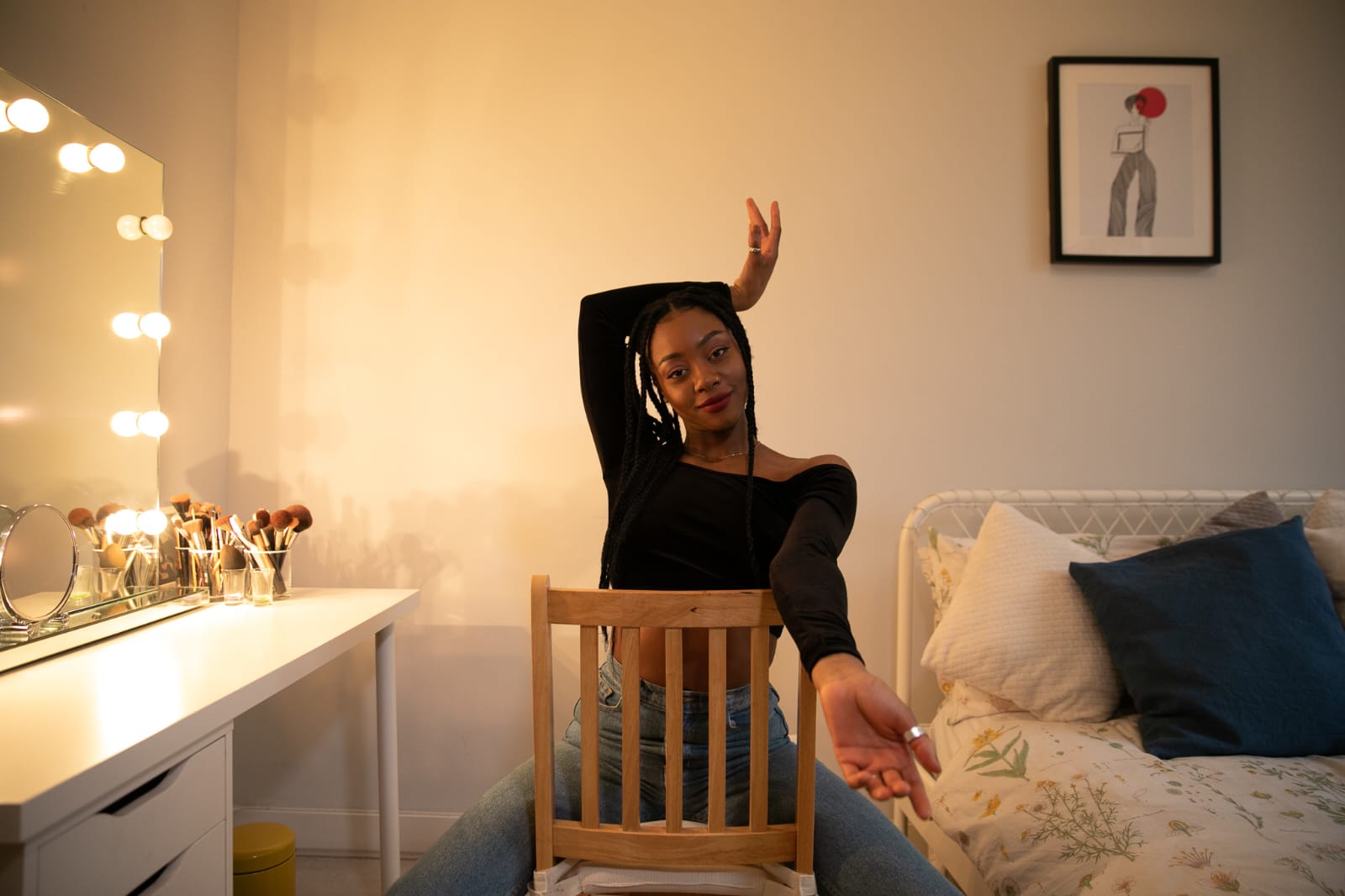 My friend and I sat gobsmacked at what we were seeing on the laptop screen in front of us.

A documentary had randomly started playing while we were scrolling through YouTube, and in it, women of all shapes and sizes in South America spun around poles as a form of empowerment and self confidence.

I decided then and there in 2014, at 18 years old, that I was going to learn pole dancing for myself.

I first started dancing at 15, having learnt both contemporary and ballet before training at National English Ballet for my last year of school.

I had just finished my sixth form and was about to embark on a gap year when I decided that I was ready to start a whole new chapter of dancing.

The nearest pole class I could find was at a tiny community centre in Sidcup – miles away from where I was living in London at the time. It was a trip that would take both a train and a bus to get to.

The class started within just three hours of me finding it, and as I sat on a tiny bus out into the middle of nowhere, armed with a £60 cheque (a term’s fees) in my pocket that I blagged off my mum, I don’t think I quite realised how much my life was about to change.

By the time I arrived, I was so nervous, especially as it became clear that everyone at the class was older than me.

I even asked the teacher if I could get the £60 back if I didn’t enjoy it (who quickly told me that no, there was no chance I was getting a refund).

However, I hadn’t needed to worry – from the first move I loved it and it was nothing like I’d done before.

I picked it up so naturally – like a fish to water; it was as if it was what my body was meant for.

We started with beginners’ spins and climbs, all of which I did without falling. My previous dance experience and strength definitely helped but I saw that you could learn pole at any fitness level and become exceptional.

For years I’d been dancing on two feet, but now I was free to use my entire body. There was a freedom that I’d never felt in my contemporary and ballet training.

From that first session I was totally hooked on pole dancing – I finished that £60 term and did another, and another and another. I moved through the levels quickly and I was in the advanced class within four months.

I carried on in that advanced class for an entire year, but as I saw more and more videos online of women dancing, I realised that what I was doing was more along the lines of ‘pole fitness’ than pole dancing – however, there was no scope for my lessons to change.

Pole fitness is focused on elements like strength, while pole dance is more in keeping with artistry and fluidity – something I found so freeing.

As it turned out, the University of Sussex, where I was studying didn’t just have classes – it had its own pole dancing society.

I looked and saw that they had shows and competitions and all its members were dancing exactly in the way I’d been curious about. I had to join it.

But how could I guarantee that I’d get a spot? Be as advanced as I could be.

I saved up and took a two-day intensive pole instructor training course – it was so eye-opening. I was with people who’d been pole dancing for over 10 years, and here I was, just a year into the game. I was such a little fish.

I learnt how to properly run a warm up and cool down and how to teach core beginner and intermediate moves, using different learning and teaching styles. It wasn’t all practical either, we also learnt about the muscular and skeletal system and hormones and how these all come into play in fitness.

I passed the course and it gave me a hoodie that said ‘Instructor’ on the back. When it came to the university freshers’ fair I wore it and went straight to the pole dancing society’s table. I tried to act aloof and hide the fact I was so desperate to join.

I was immediately put into their advanced classes, doing sessions twice a week. I did my first inter-university competition just two months later as part of a group routine.

I couldn’t believe it when we won regionals and went on to compete nationally, and from there my practice just kept on improving.

The next year, the third year committee members who had been training us were leaving and they needed people to take over.

My friend and I were asked if we wanted to apply to run the group – she became president and I was elected vice president. We ran the society for a year together and it was so much fun but also exhausting – I was in my second year of university and I was studying psychology.

In third year I stepped back from the pole committee and taught here and there. I put myself forward to perform an advanced solo at that year’s inter-university pole competition – I couldn’t believe it when I came third overall nationally.

Despite feeling like I was juggling a full time job along with my studies in third year, a friend had told me about a Black woman in Peckham, Kelechi Okafor, who owned a pole studio, so I started commuting to her classes every single Tuesday from Brighton.

I was a massive fan of Kelechi’s before I learnt of her lessons – she is a remarkable person whose podcast has taught me so much about life and my own identity.

It was amazing to be around her for that reason but she had also been a fitness professional for years.

I was in absolute awe of her – she was training her students at a level I’d never known was possible.

Kelechi’s fitness was on another level; she’d been on SAS Who Dares Wins and had begun incorporating military level strength training into her practice.

While training in Peckham, I was put in touch with Black Girls Pole – a US-based pole organisation that focuses on Black women in pole and their journeys. I was invited to perform at their first UK showcase; it was an experience that connected me with a lot of other Black women who dance in the UK for the first time – I suddenly had a community.

I had always recognised that the arts as a whole seem to exclude those who are non-white, so I had never actively thought about it when it came to pole. I just focused my energy towards my own community – unconsciously shielding myself from the discrimination.

But the people I met changed everything – they’d all felt the same as I had, unseen and in the shadows as a Black dancer in an industry that focused primarily on white women.

In the mainstream pole industry, and in the ‘pole bibles’ of the moves you learn, there was never anyone in instruction videos and resources who wasn’t white.

I’d seen in competitions that white and Black performers were treated differently – my friend came last in a national competition when his performance had been absolutely exceptional. Everyone was very shocked when the results were read out and first, second and third place all went to white men.

The more people I connected with, I just kept hearing more and more stories of Black pole dancers being treated unfairly – with some even being ostracised from competitions for speaking out against the racism and discrimination they’d experienced.

It didn’t seem like people who were on the boards on some of these competitions cared about diversity. If you think that’s bad, a pole competition in Europe allowed Blackface.

I knew Black Girls Pole was helping people in the US – but there was just nothing like this in the UK.

I started talking to the founder and she encouraged me to start something similar. I was so nervous and it was the first time in my whole pole experience that I didn’t jump straight into something. Race is such a sensitive issue and I was worried I wouldn’t have enough support.

But ultimately, in 2020, I started Blackstage Pole. Initially I just started it as a platform to showcase pole dancers of colour – I did posts about them and how they got into pole in the hope of inspiring more POC to give it a try.

It completely blew up, so many people reached out and I got messages like, ‘Oh my god I didn’t know there were other East Asian pole dancers, I thought I was the only one and now we’re all connecting through you’.

Blackstage continued to grow and I realised I had so many instructors on hand across the UK and I didn’t know whether they all knew about each other or if wannabe pole dancers would find them – so I created a resource of locations and instructors that were there.

Everyone started connecting and finally people looking to learn pole dancing here in the UK could be taught by instructors in their area who looked just like them.

I knew I wanted to do a show so I started fundraising and eventually bagged funding from Arts Council to out one on that would actually pay performers. Payment – or the lack of it – is a huge issue in the pole community as people forget it’s not a hobby, it’s a job.

It was so exciting to know I could cover the cost of these performers’ travel and food and actually pay them for their performances. I could hire videographers and photographers who were people of colour and make sure everyone looked good.

The show was a huge success – we sold out very quickly and so many people offered to help. Nike gave us a kit for our performers, which was so cool – we’re a non-profit organisation and any extra money was split between performers.

The feedback was beautiful – audience members told us the energy was electric and that they’d never seen anything like it, some were even in tears. One performer did a piece to Chinese opera, it was so moving that they felt confident enough to express their culture.

And that’s the key – people feel safe in our community – we’re a queer and sex-worker led organisation. From the ground up we’re always a space for the most marginalised.

People had been reaching out to me for years to share that they’d felt isolated being the only person of colour at their pole studio and now they’re finding one another and growing a community in their local areas – finally, something is being done to combat discrimination in pole.

Blackstage exists to tackle the underrepresentation of Black people and people of colour by creating career-enhancing opportunities. Their next event is 1 April and will showcase 13 magnificent pole dancers – buy tickets on Dice or via the Clapham Grand website.