Home » Lifestyle » I visited Pompeii in the middle of Europe's deadly heat wave, and I couldn't believe how many tourists braved the sweltering temperatures

Temperatures in parts of the continent have breached 40 degrees Celsius (or 104 Fahrenheit) this week as a wave of hot air from the Sahara covers the continent.

Read more: The heat wave in Europe is so intense that the weather map of France looks like a screaming heat skull of death

I have the good fortune of being in the south of Italy, generally considered to be one of the hottest places in Europe anyway, during this heatwave.

To add to my enjoyment of the sweltering temperatures, I made the sage decision to take a three-hour walking tour of the ancient city of Pompeii, near Naples on Thursday.

Naples is among sixteen cities in Italy to be put on red alert this week as temperatures are predicted to hit 41 degrees Celsius (106 Fahrenheit) in some areas.

In Rome, the Civil Protection Department was handing out water near tourist hotspots like the Colosseum and the Roman Forum.

Two people in Italy have already died from heatstroke,The Local reported on Thursday. Both the casualties were elderly men — one reportedly homeless and found dead in a park in Milan, and another found in the countryside in Le Marche after going for a walk.

Many Italians will remember the European heat wave of 2003, which killed 18,000 people in Italy alone, according to The Local.

Nevertheless, in the interest of journalism, I decided to brave the trip toItaly’s second most visited historical site (after the Colosseum) — but I have no idea what anyone else was doing there.

Not only was I not alone wandering around the exposed ruins of the ancient civilisation, but Pompeii was absolutely packed.

This was the view at the entrance… 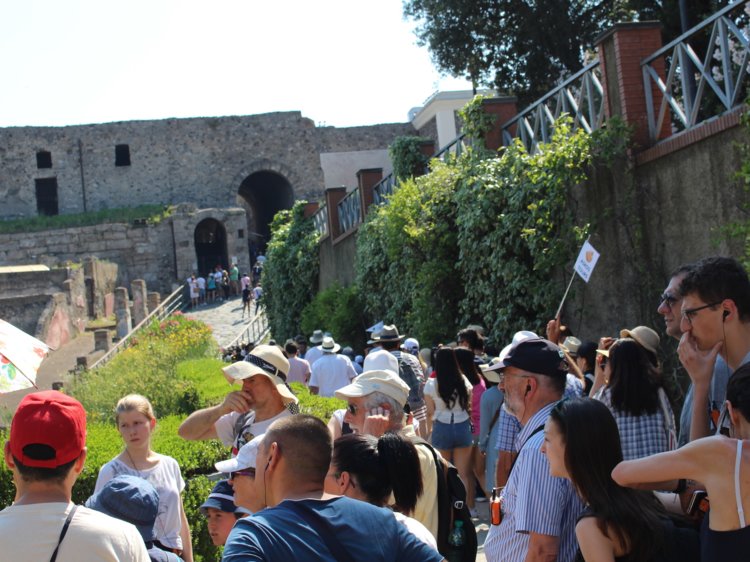 … and this photo was taken in Pompeii’s forum (the main square). 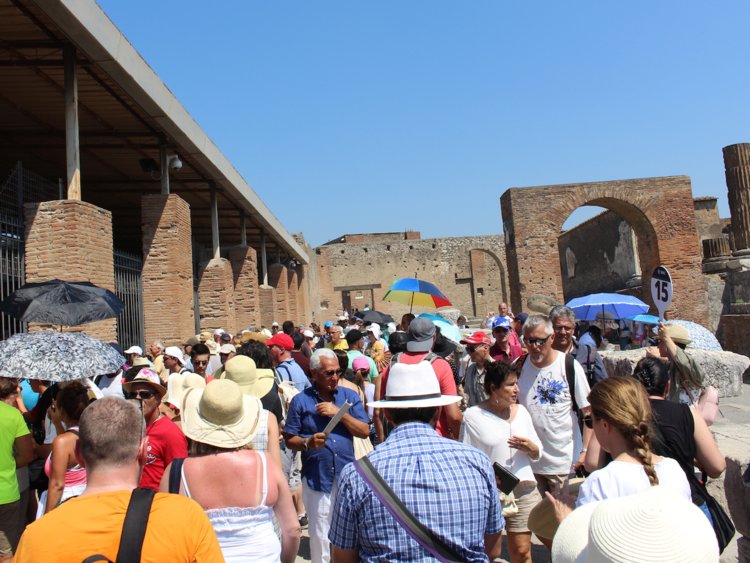 Our guide told us that during peak season, Pompeii regularly welcomes more than 10,000 tourists per day, and the heat hadn’t seemed to deter anyone.

The thing about ancient ruins, especially those destroyed by one of the biggest volcanic eruptions in European history, is that there are very few tall structures to provide any shade.

At noon, when the sun was directly overhead, any shady spots became very sparse indeed, and many tourists huddled around one small wall or monument for relief. 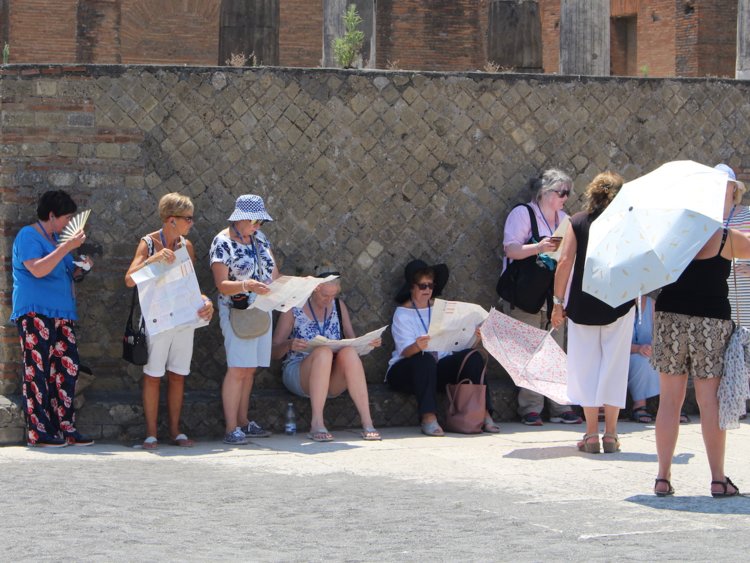 The prudent tourists also carried umbrellas around with them. 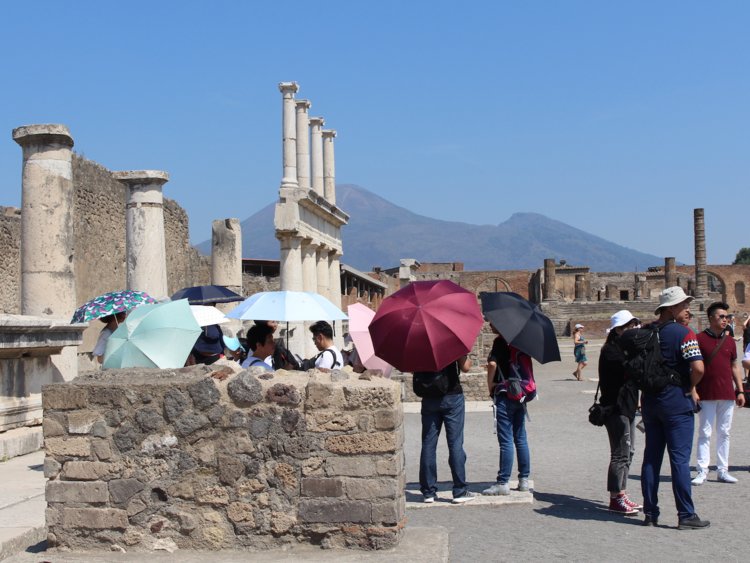 But the heat didn’t stop some travelers from posing for the perfect snap. 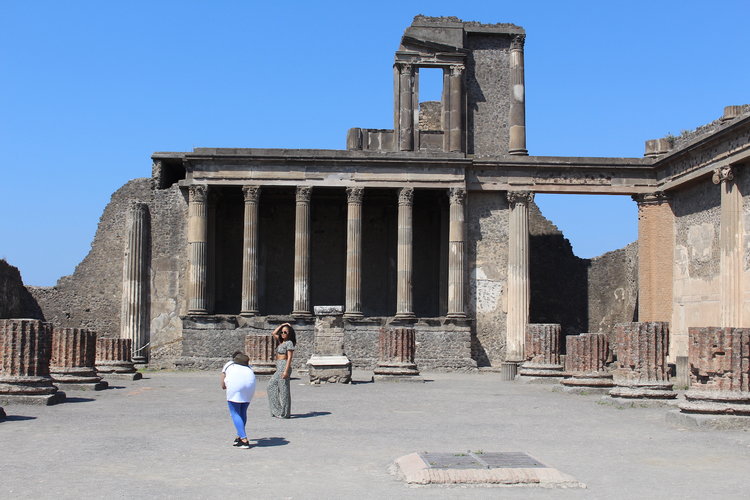 Every inch of my body was producing sweat — even the backs of my hands, which I don’t think I’ve ever experienced before.

Mercifully, there were some water fountains in the ruins where tourists splashed water on their faces and queued to refill their depleted water supplies. 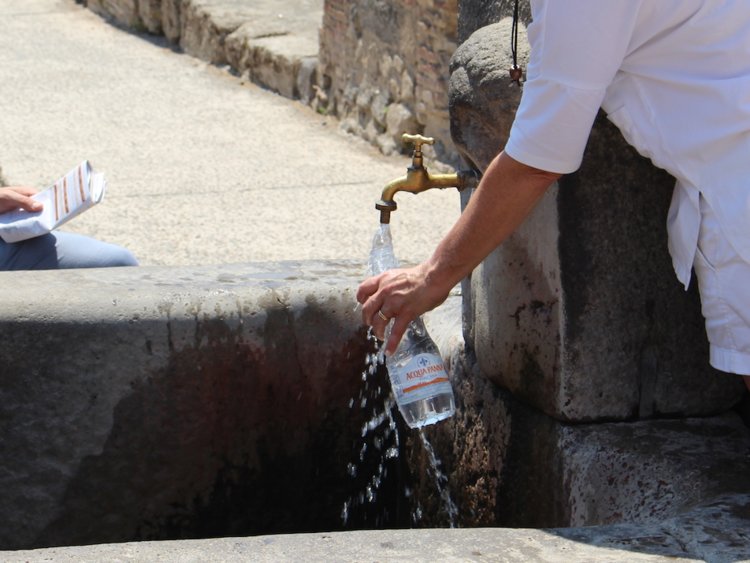 Thoroughly interesting though our guide was, everyone was wilted, sunburnt, and dripping with sweat by the end of the tour.

The government in France hasurged people to spend time in cool places like supermarkets and cinemas, and though this might not seem like the best use of your holiday time, I certainly would have opted for an indoor or pool-based activity if I was on vacation.

If I return to the ancient ruins of Pompeii, I’ll be doing so in the cool confines of winter.