A mother-of-one who weighed 299lbs and struggled to get into size XXXL clothes lost almost half her body weight in just over a year after separating from her husband.

Morgan Woodruff, 33, from Weston, Wisconsin, piled on around 140lbs after falling into bad habits as her mental health declined following the death of her father and she turned to ‘comfort eating’.

At her lowest, she was gorging on up to 5,000 calories every single day, often eating McDonald’s and oven pizzas for dinner.

But after dropping 142lbs in just over a year following her split and a cruel comment from a friend who branded her ‘fat’ she is able to recognize herself again – and can even fit into size XS clothes. 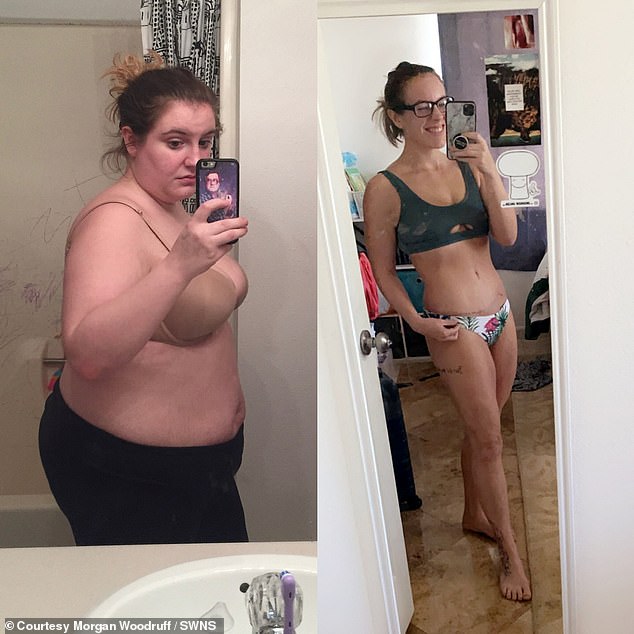 Morgan Woodruff, 33, from Weston, Wisconsin, who weighed 299Ibs (left) lost 142lbs in just over a year after splitting from her husband – later getting 5Ibs of excess skin removed including deformed tattoo (right)

The waitress admits she didn’t realize how much progress she had made until the final step – getting 5lbs of excess skin removed – and she now sports a svelte 126lb figure.

She can slip into a slender size XS with ease – and sometimes even shops in the kids’ section.

In an unexpected ‘bonus’, a misshapen heart tattoo on her hip was on a section of skin she had removed. 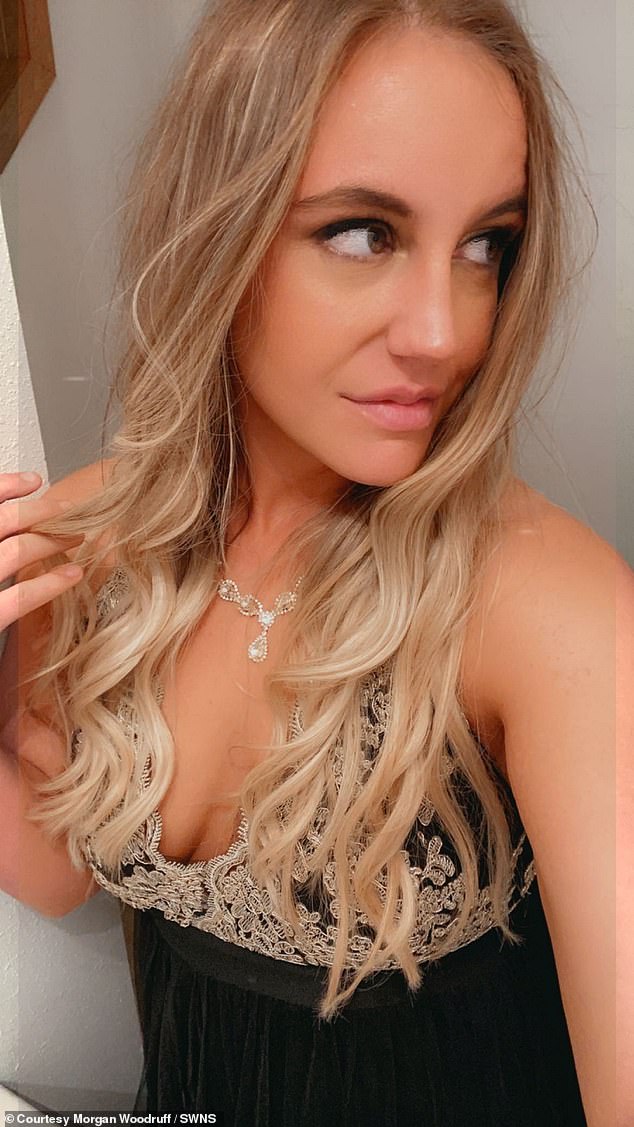 Morgan, who is now a blonde, looks very different after splitting from her husband and a cruel remark from a then-friend kick-started her transformation 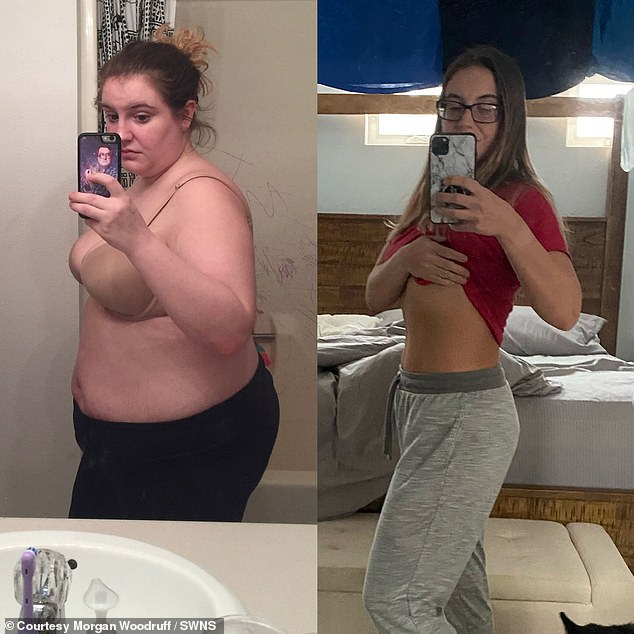 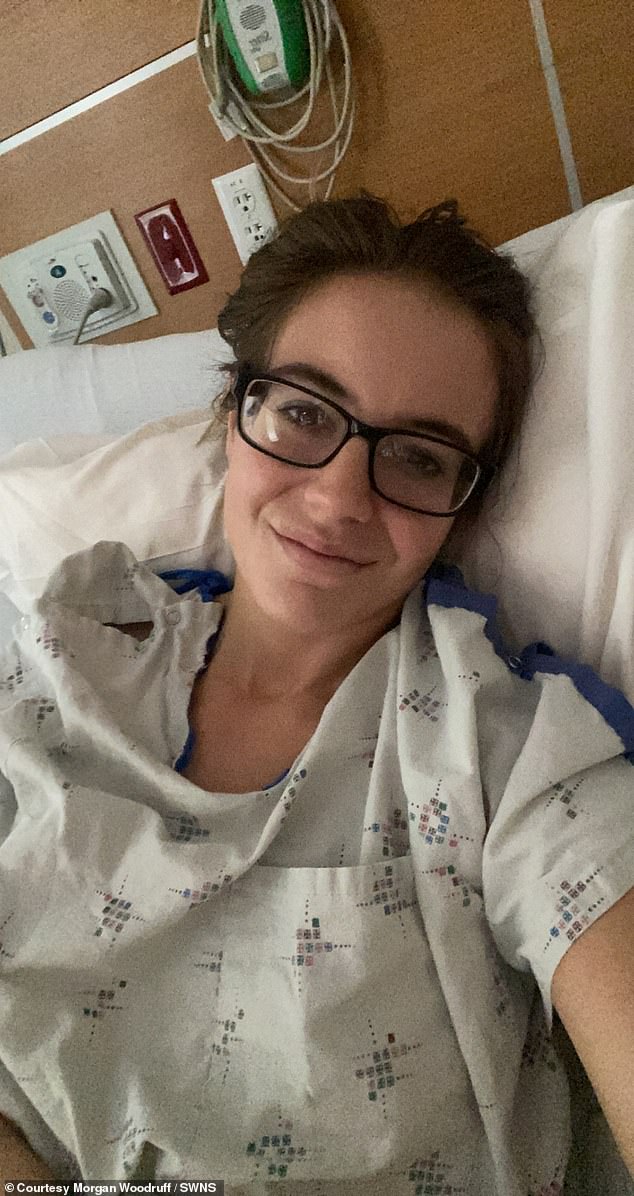 She originally had the heart and peace sign inked onto her in memory of her late father, but said it ‘stretched’ when her body changed shape due to weight gain.

Morgan, who is mother to nine-year-old Nora, said: ‘I used food to cope with my mental health – I would eat anything sweet and easily accessible.

‘I was binge eating up to 5,000 calories a day – processed food, constant snacks and soda. No fresh cooking at all.

‘In my 20s, I lost my father, fell out with my childhood friends for good, and got a divorce – and when I turned 30, I realised if nobody would love me, I needed to love myself.

‘This time last year I hit my weight loss milestone of just over 10 stone, but I couldn’t see what I had achieved until I had skin removal surgery. 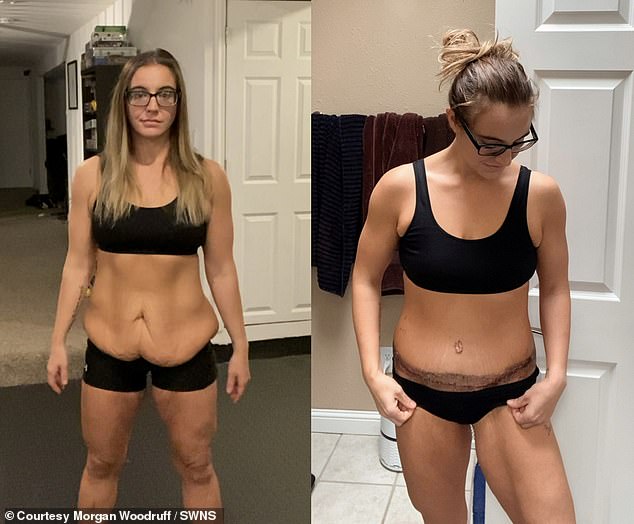 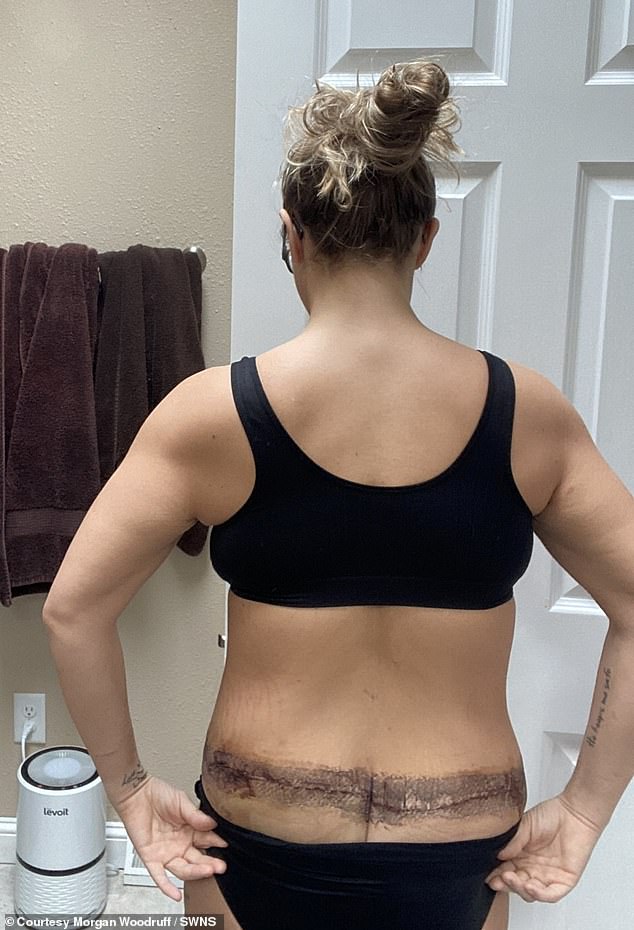 Morgan showed progress pictures after she had access skin removed from around her stomach, hips and back

‘Now I’m just so proud – it took a long time to get there, but I chose myself and realized I can do anything.’

She added: ‘I loved the memory of the tattoo, but disliked the tattoo itself – it was all misshapen and stretched.

‘My daughter would tell me it looked like Olaf’s arm, from Frozen. I didn’t plan for the tattoo to be removed – but it was a lucky bonus.’

Morgan was super-fit as a teenager and young woman, and did ballet every day – but a move from her hometown of Minocqua to Stevens Point with her then-boyfriend meant she fell out of healthier habits.

She started a college course, but she was battling several undiagnosed mental health conditions at the time, culminating in her dropping out, she said.

She said: ‘I didn’t have any friends, I didn’t dance any more, and I didn’t have a job or any hobbies. I was so overweight that I didn’t really do anything of interest at all.’ 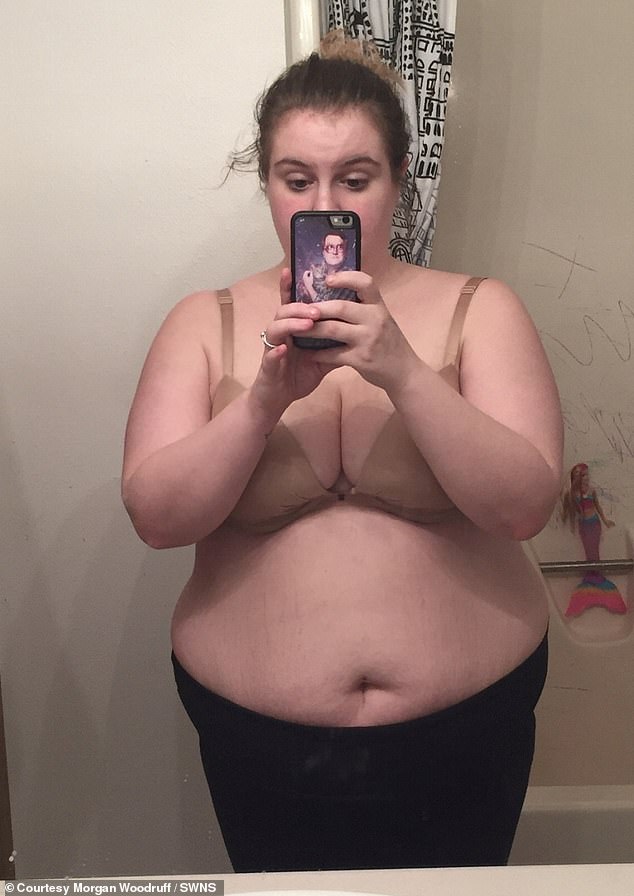 Morgan piled on 140Ibs in just two years, Her favourite meal would be McDonalds if eating out, and an oven pizza if eating at home

Her favorite meal would be McDonald’s if eating out, and an oven pizza if eating at home.

She had her daughter in August 2013, and married three years later.

Her ‘self-destructive’ behavior worsened dramatically after the death of her beloved father, Woody Woodruff, 58, in September 2014.

Morgan said: ‘I was in total denial, on a downwards spiral. He single-handedly raised me, so I felt my life was on pause for another few years after that.’

She tried ‘every fad diet’ and her weight fluctuated constantly but would always gain it again.

It was when she hit the age of 30 that something changed – prompting Morgan to vow to change her life.

She recalled a low moment during a fall-out when her then-friend told her: ‘You’re so fat, what’s wrong with you? You’ve let yourself go, aren’t you embarrassed?’

Around the same time, at the start of the pandemic, she also split with her husband.

She said: ‘I realized I wasn’t there for myself. If nobody would love me, I needed to love myself.’

Separated, but still living with her husband, she built a small workout area in the basement and began working out three days a week.

She ate healthier and cut out most of her fast food habits, learning to cook meals for herself.

She also finally decided to get proper mental health treatment after being officially diagnosed with anxiety, depression, PTSD and borderline personality disorder.

Morgan said: ‘I chose myself, because I had to.’

She stuck to her exercise routine and ate 1,700 calories per day.

By January 2022, she had lost 140Ibs but said excess skin prevented her from seeing her full transformation. 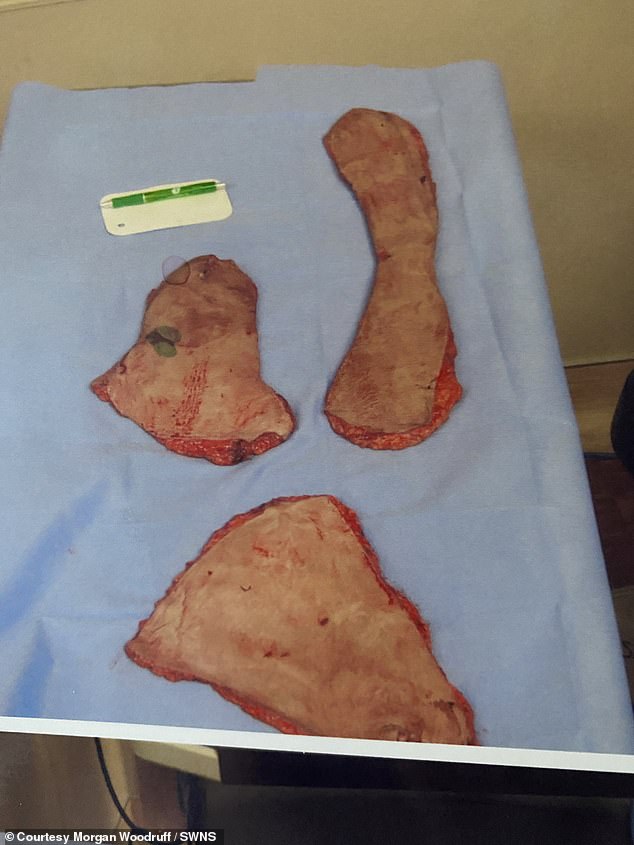 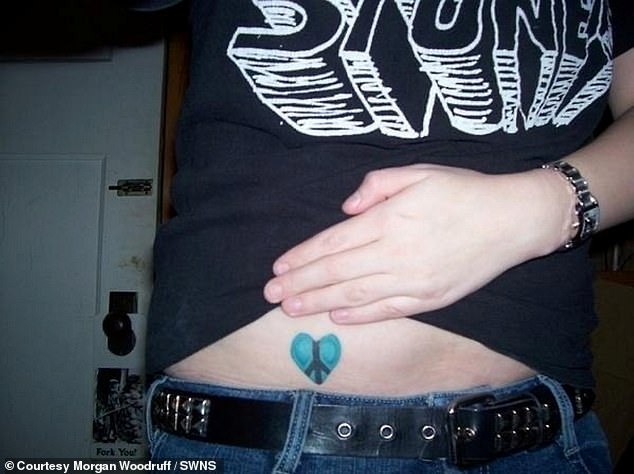 She had skin removal surgery on her stomach – called a 360 panniculectomy – in March 2022 – where surgeons cut off 5lbs of skin from her stomach and back.

The blue tattoo she had once loved went with it.

She said: ‘I have a new partner now and have shared custody of my daughter with my ex-husband.

‘We were not compatible as spouses, but we’re amazing co-parents and good friends.

‘Some days I struggled, and I still do, but I believe in me. I needed to know my daughter wouldn’t look at me and think being unhealthy was ok.

‘Now I can say that’s true – and I teach my healthy habits to my daughter.’

Morgan’s diet: Before and after

Breakfast – Two sausage McGriddles, two hash browns, a sausage burrito, coffee with cream and sugar, and an orange juice. All from McDonalds.

Dinner – Easy quick meals, low cost but high nutrition, such as slow cooker meals. Spicy beef pot roast with vegetables, or BBQ chicken sandwiches. Or home made tacos – each taco is less than 50 calories – six is 300cal. Topped with cilantro, lime and onion.

Snacks – Still ice cream but Halo Top ice cream – half a tub is only about 150 calories.

Exercise WON’T help you lose weight, says top diet expert… who says you should follow this advice to beat the bulge

Fast way to lose weight: Delicious healthy recipes to get you in the best shape for 2023

Seven ways to lose weight with MINIMAL effort: Trick your mind with smaller plates, kill those hunger pangs with cups of tea and ALWAYS park far away from the store entrance