Bill Lawrence seems to have a knack for the zeitgeist. Through the best part of three decades, in an era where television has gone through momentous changes in style, tastes and delivery systems, he seems to have continually hit on formulas that resonate.

His work has progressed from the political sitcom Spin City in the ’90s, to the feelgood-cum-heartbreak medical comedy Scrubs in the 2000s, through to Ted Lasso, the life-affirming promotion of relentless positivity wrapped up in the tale of a clueless American coaching a broken-down soccer team that came along just when a virus-stricken world desperately needed some sunshine in its life. Repeatedly Lawrence seems to strike on something that audiences are hungering for, and his latest, Shrinking, a comedy-drama about grief, loss and trauma, might be yet another timely intervention in viewers’ souls. 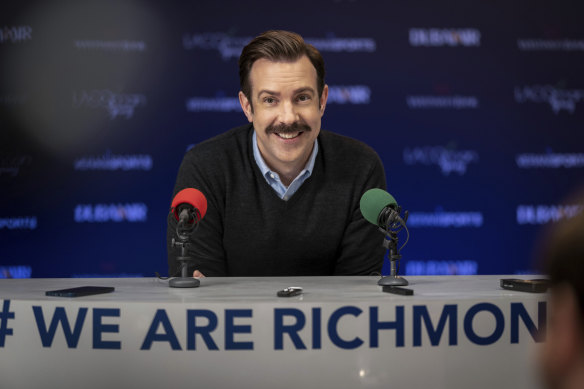 Lawrence, a man committed to self-effacement, doesn’t own up to any knack. “I think it’s the other way round,” he muses. “I think where I’m lucky is, I know I repeat myself sometimes, and I’m trying as I get older to get a handle on my voice – if that doesn’t sound too pretentious. The truth is the shows that I’ve written that were the biggest failures – just absolute dumpster fire pieces of shit – were inauthentic. And the shows when I’ve gotten really lucky, I’m generally writing about emotional stuff that I think we’re all going through.

“Ted Lasso is an example: one of the things Jason (Sudeikis, star of Lasso) talked about, we didn’t know the show would be successful, we just knew we needed to work on something that was hopeful and optimistic, you know? Cos I f—in’ needed it so bad. My favourite type of shows are comedies dealing with moments of emotional depth, cause that’s how I deal with this stuff.”

Shrinking definitely fits that bill: although there are plenty of laughs, it goes to some painful places in the course of getting to them. The show centres on therapist Jimmy, played by series co-creator Jason Segel, a man whose job is caring for the mental health of others, but whose own is in meltdown following the death of his wife. Mired in grief and with his relationship with his daughter at rock bottom, Jimmy suddenly breaks out of his routine and begins telling his patients exactly what he thinks – a move that simultaneously gives him a new zest for life and gets him in big trouble.

The origins of Shrinking began with conversations between Lawrence and Brett Goldstein, the third creator of the series, who also stars in Ted Lasso as Roy Kent. 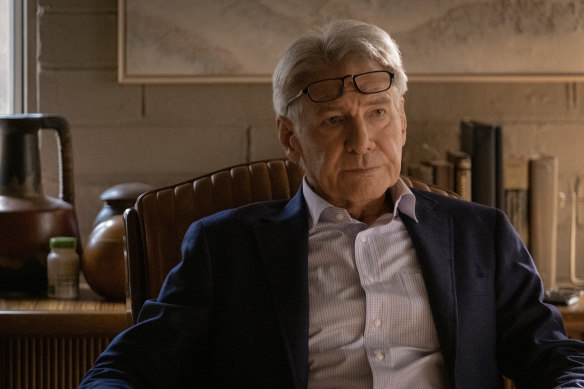 Harrison Ford plays a therapist with no filter in Shrinking.

“We were in London and we went out to a pub,” Lawrence recounts, “and we were both coincidentally trying to write a show about dealing comedically with grief, because his dad’s got Parkinson’s – which is in the show – and my dad’s got something called Lewy bodies, which is what Robin Williams had. And Brett and I are both guys who try to meet this shit with a smile and a laugh, as a way of trying to get through it.”

That “other way round” he referred to came into play again, when the show got off the ground and the creators discovered that the concept born from their own personal grief was more universal than they knew.

“What’s been amazing for us is we’ve hired a cast and crew and writers, and when you go, ‘Hey, anyone else dealing with trauma and grief right now?’ – everybody is! It’s a bit of a shitstorm. I got a massage the other night – because I’m a Hollywood elitist – and I asked her where are you from, and she said, ‘I’m actually from the Ukraine, my family’s there’. I was like, holy shit! I think that I either smartly, or occasionally stupidly, write about what we’re all feeling at the time. And sometimes it’s caught hold and sometimes the audience is like ‘why don’t you shut the f— up?’” 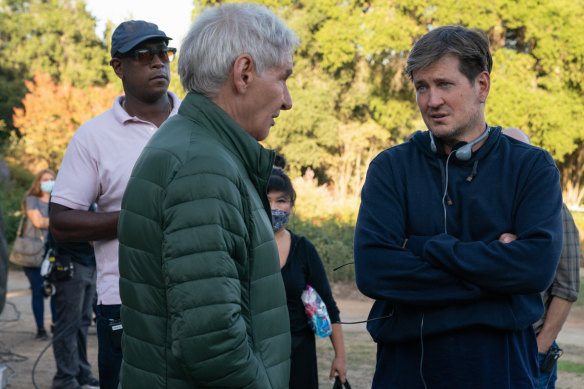 Ford with creator Bill Lawrence on the set of Shrinking.Credit:Apple TV+

The universality of trauma is part of Shrinking’s appeal: although the story begins with Jimmy’s attempts to break out of grief, as the show proceeds it becomes clear that everyone around him is dealing with their own pain. From his patients to his daughter, shattered by the loss of her mother and her father’s detachment, to his colleague who is going through a divorce, to his next-door neighbour whose ebullient front hides her desperate fight against loneliness. And most poignantly of all, Jimmy’s boss Paul, who like Goldstein’s father is suffering from Parkinson’s and having to deal with the creeping loss of his own independence.

In a major coup for the makers, Paul is played with gruff humanity by Harrison Ford. So how do you get Indiana Jones to sign on for your TV show?

“He came in and read, and we were like, we’re gonna take a shot on this kid,” Lawrence says. But seriously: “I finally reached the age about 10 years ago that I don’t feel like an idiot when people say no to me. I just move on. I knew Harrison a little bit because we’re neighbours almost, and I sent him the script and said, ‘Hey man, I think you’d be awesome in this’, and he called me up and was like, ‘Hey, it’s a good script. Am I in it more after the pilot?’ And I go, ‘Harrison, if you take the part you’re gonna be in it a ton, dude.’ And he goes, ‘Ah, maybe I’ll do this.’ And I wasn’t prepared for him to say anything but no.

“But to have him on set – we celebrated his 80th birthday on set – he’s so inspiring because he still wants to try new shit. He called me up and said, ‘I think I’m gonna do one of those superhero movies.’ I said, ‘Why?’ He said, ‘I dunno, cos I haven’t – same reason I’m doing your show.’ Watching him do this stuff, and still take those chances: man it’s inspiring.”

Ford, like the rest of the cast – as well as Segel, the series stars comedian Jessica Williams and sitcom veteran Christa Miller – is very funny in Shrinking. It’s the collision of raucous comedy and crushing sadness that is the show’s hallmark, as Lawrence and Goldstein planned back in that London pub.

Shrinking, like Scrubs, actually came from Lawrence’s frustration with the over-seriousness of the health professionals depicted on TV, which was so at odds with what he saw in real life.

“I was like, why are all these doctors so serious and stoic and dramatic? My buddy’s a doctor and he’s the world’s biggest goofy f—up,” he says. “As a kid I loved M*A*S*H because this is about war and everybody’s dying and it was the funniest show in the world.”

Shrinking may not be M*A*S*H, but Lawrence may have found his way yet again to the kind of show people need right now – one that celebrates the two things that are most human about us: tears and laughter.

Shrinking is on Apple TV+ from January 27.