It took only a day before Barnaby Joyce’s new job thrust him and the Morrison government onto the perilous horns of a dilemma.

Joyce, for long moments on Thursday, appeared to have a seriously unappetising choice: vote against his own Nationals party – of which he is the new leader – or resign his brand-new position as the Deputy Prime Minister. 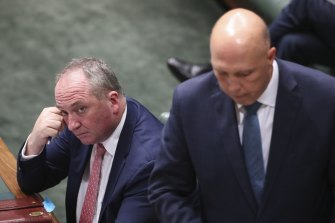 The Leader of the House, Peter Dutton (right), sought to toss Barnaby Joyce a lifebuoy by demanding the Nationals’ motion be ruled out of order.Credit:Alex Ellinghausen

It all came about because the Nationals want to torpedo the Liberal-dominated government’s fraught Murray-Darling Basin Plan. The Nationals essentially want to rule out water recovery from irrigators for the environment.

The Nationals had already failed to blow away the official government position in the Senate – an attempt that left Liberals fuming. But on Thursday, Nationals MP Damian Drum introduced an identical amendment to the House of Representatives that flatly contradicted the Liberal stance.

Joyce, with a long history of crossing the floor to vote against Coalition plans with which he disagreed, found himself cast high and dry.

As a new and very senior member of the Morrison government’s cabinet, he is bound by cabinet solidarity to support the government’s position, even if he and his own party are opposed to it. 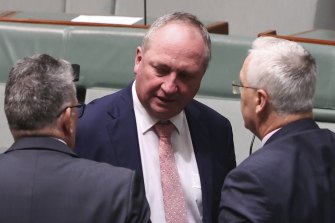 Thus, he was required as Deputy PM to vote with the government and in effect against his party, the Nationals, in relation to the Murray-Darling plan.

The only alternative was to go along with his party and resign as Deputy PM.

As MPs huddled, trying to figure out how it would all end, the Leader of the House, Peter Dutton, sought to toss Joyce a lifebuoy by demanding the Nationals’ motion be ruled out of order. In short, the government wanted to use Liberal power to shut up its own Coalition partner to save Joyce.

Unsurprisingly, the Labor Party was thrilled to cash in on the Liberal-Nationals discomfiture, and wanted the Speaker, Tony Smith, to overrule Dutton.

It ended as it began – in farce.

The Speaker denied Labor’s attempts to silence Dutton’s motion to silence the Nationals, and Drum withdrew his amendment, silencing his party.

Joyce breathed again, saved from having to make an impossible choice.