Home » Half yearly report card: The best TV shows of 2021 so far 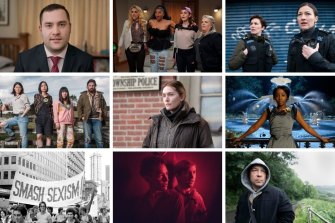 As we reach the midway point of 2021, here are the new television shows that our critics gave five-star and four-and-a-half-star reviews.

Why watch: The first comprehensive documentary on the women’s liberation movement in Australia, Brazen Hussies is a compelling mix of archival footage from the movement’s nascent years in the 1960s and 70s, and new interviews with many of the activists at the forefront. 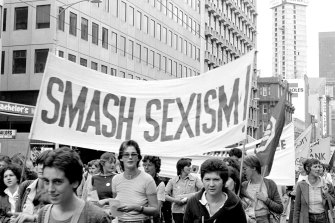 A still from the documentary Brazen Hussies.

It’s shocking, funny and moving – and given recent events, a timely reminder of the power of people to make genuine change. The film doesn’t shy away from the various divisions in the women’s movement, some of which exist today.

If you like: She’s Beautiful When She’s Angry, the US documentary about the birth of the US women’s liberation movement in the 1960s, which helped kick off the Australian movement. Also For Love or Money, a celebration of women’s work, chronicling Australian women’s gains and losses from white settlement to the 20th century.

Why watch: It’s a four-part comedic harmony as Sara Bareilles, Busy Philipps, Paula Pell and Tony Award-winner Renee Elise Goldsberry play the members of a forgotten ’90s girl group trying to get the band back together. Scalpel-sharp and brilliantly cast, it’s one of the most charming, insightful and flat-out funny things you’re likely to see all year. 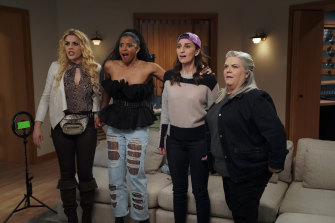 If you like: Comedy with a big heart, a gimlet eye and a high density of gags, such as 30 Rock and Unbreakable Kimmy Schmidt. Executive producer Tina Fey brought her own A-team to the production, ensuring that the jokes – and the songs – are tip-top.

Why watch: Based on journalist Jess Hill’s award-winning book of the same name, this documentary series is must-watch, if difficult, viewing. Addressing Australia’s domestic violence epidemic, Hill outlines what needs to change in order to keep women and children safe, how perpetrators of abuse can be properly held to account, and what can be done to prevent such widespread abuse. She also gives voice to survivors of abuse and those left behind after family violence fatalities; it’s shocking, sad and infuriating. 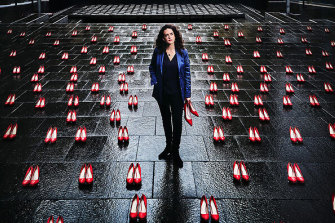 Jessica Hill in a still from SBS series See What You Made Me Do.

If you like: Investigative documentaries and stories that go behind the headlines. There are many vulnerable people interviewed throughout and viewers are advised that some material is distressing.

Why watch: An almost entirely female cast – admittedly by necessity as Creamerie is set in a New Zealand where all men and boys have been killed by a mystery virus – and a diverse creative team and crew have put an original twist on the well-worn post-pandemic genre. Flipping The Handmaid’s Tale narrative, New Zealand is now a women-led utopia (menstruation leave is mandatory) built around “wellness”. 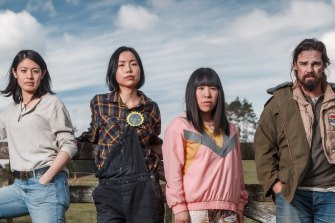 When Alex (Ally Xue), Jamie (JJ Fong) and Pip (Perlina Lau) discover a man on their dairy farm, eight years after the last men died, the real truth comes to light. Fast-paced, and hilarious (what’s not to love about a neo-fascist state predicated on wellness?), Creamerie is also unexpectedly poignant in parts. The three lead actors, who also created the series, are Kiwi-Chinese and cast themselves after tiring of a lack of visibility on local TV.

If you like: Deadpan Kiwi humour, Wellington Paranormal, What We Do In The Shadows, post-apocalyptic comedy like Shaun of the Dead, The Last Man on Earth.

Why watch: An incredible cast – from emerging young stars to veterans such as Stephen Fry and Neil Patrick Harris – brings screenwriter Russell T. Davies’ depiction of London’s gay scene in the 1980s to life in all its highs and devastating lows, as a nascent health crisis engulfs the city. There’s plenty of heartbreak, but it’s also a joyful celebration of youth, discovery and embracing identity. 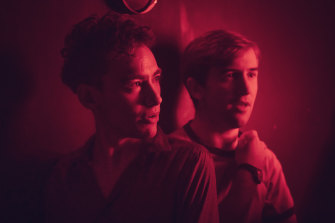 Olly Alexander as Ritchie Tozer and Callum Scott Howells as Colin Morris-Jones in It's a Sin.Credit:All3Media

If you like: Most of Davies’ previous work, such as Queer As Folk, Cucumber and Years and Years, or US drama Looking. 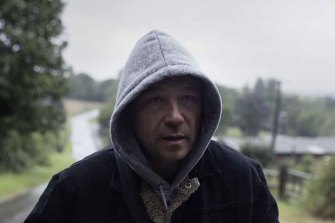 Stephen Graham in The Virtues, which deals with the enduring legacy of childhhood abuse.Credit:Stan

If you like: This Is England (the 2006 film and two sequel mini-series are also streaming on Stan) and tough, unflinching dramas in which old wounds are ripped open and happy endings are not guaranteed.

What: Four episodes, documentary, Foxtel on Demand and Binge

Why watch: This is a behind-the-headlines re-assembly of the details of the accusations of abuse levelled against filmmaker Woody Allen by his daughter Dylan and her mother, actor Mia Farrow, juxtaposed with the circumstances in which Allen began a relationship with Farrow’s adopted daughter Soon-Yi Previn, who is now his wife. 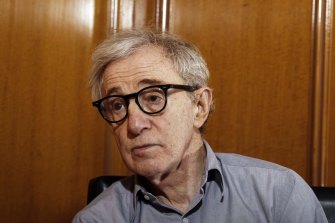 If you like: Ultra-sharp clinical documentary-making, like The Inventor: Out for Blood in Silicon Valley, or simply if you followed the Allen v. Farrow case and you want to understand both the context and detail.

Why watch: Jed Mercurio’s masterful bad-cop drama returns in cracking form as you’d expect. The anti-corruption unit AC-12 is coming undone, even as it gets a tough new target in the form of the ever-marvellous Kelly Macdonald (Trainspotting, Boardwalk Empire). Taut writing, great performances and an uneasy alliance of old friends facing a new antagonist make for unbeatable TV. 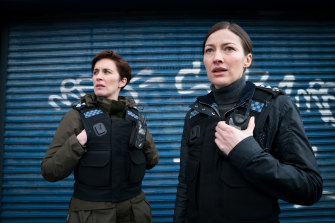 High-calibre guest roles are a hallmark of Line of Duty, such as Kelly Macdonald (right) playing the possibly corrupt DCI Joanne Davidson in the most recent season.

If you like: Top-drawer, slow-burn crime dramas including The Wire and British internal-affairs gear such as Between the Lines. This is season six; if you’re new to the series, there’s plenty to luxuriate in with Stephen Graham, Lennie James and Keeley Hawes starring in previous seasons. Only Britbox has all six seasons (and it has a free trial too). Stan* and Netflix have the first five seasons, while Foxtel has the first four.

Why watch: The crime thriller aspect propels the narrative of this seven-part HBO series, but it’s the character studies that make it so compelling. Of course, Kate Winslet as police detective Mare Sheehan is the main attraction, but there’s a multitude of beautifully crafted performances, spearheaded by Evan Peters (best known as Peter Maximoff/Quicksilver in the X-Men movies, and in WandaVision) as the out-of-town cop drafted in to help her investigate the murder of a teen mother. 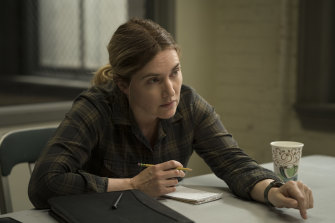 Kate Winslet in Mare of Easttown.Credit:HBO

If you like: Detective stories in which the setting is almost a character in its own right. Think Sharp Objects, True Detective (the gothic south) or Fargo (the snow-swept midwest). Easttown may never earn a “wish you were here” postcard, but it feels utterly lived in.

Why watch: You’ll laugh, you’ll cry, and you’ll have your faith in humanity – and television dating shows – restored. It also sheds some much-needed light on the realities of high-functioning autism. 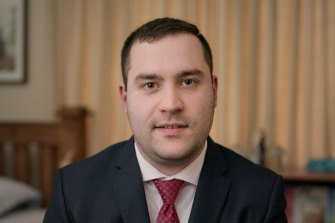 Michael from the ABC series Love on the Spectrum, season two.

If you like: Factual series Employable Me (ABC iview), made by the same producers; or Everything’s Gonna Be Okay (Stan), Josh Thomas’ fictional comedy/drama about a parentless family, including one girl on the spectrum, muddling through love and life.

Why watch: Irish stand-up and 8 Out Of 10 Cats regular Aisling Bea created and stars in this delectable dramedy, playing English-language teacher Aine, who emerges from a hospital in London after a nervous breakdown to negotiate an uncertain path back to normality and her broken family. Socially awkward, sarcastic yet deeply empathetic, she’s a frail butterfly trying to find a safe place in a milieu that doesn’t easily accommodate her warped sensibilities. 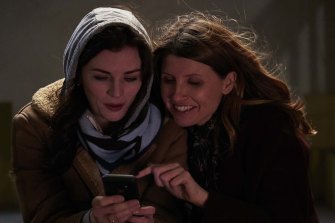 Aisling Bea and Sharon Horgan in the delightful comedy This Way Up.Credit:Stan

If you like: For starters, Sharon Horgan’s Catastrophe (Horgan executive produced this and plays Aine’s protective older sister Shona), Phoebe Waller-Bridge’s Fleabag, or anything from that sub-genre of dramedies such as Back To Life, Motherland and Better Things that prefer to depict female experiences – from mating rituals, the single life all the way through to parenthood — with unvarnished, realistic humour.

Why watch: It is certainly true to say that by the closing frames of The Underground Railroad, based on the novel of the same name by Colson Whitehead and produced and directed by Barry Jenkins, you’re not quite the same person you were when you started watching. 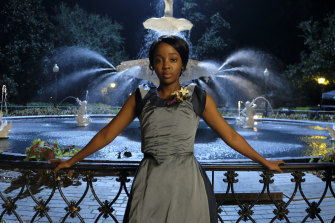 This is an alternate history; that is, a historical drama that remains true to the essence of history but changes certain superficial details, most notably here, changing the underground railroad from a metaphor representing the various safe houses and routes that led escaped slaves to safety in early America, to a literal subterranean railway, with carriages and station agents doing the same. Spellbinding performances bring to life an unexpectedly compelling merger of history and fantasy.

If you like: 12 Years a Slave, Django Unchained, Roots, but also The Handmaid’s Tale.

*Stan is owned by Nine, which also owns this masthead.