Grand Designs viewers are left in tears over widow and her ‘gorgeous’ family who rallied to help build her dream £450,000 home – after she moved into a caravan when her husband died

Grand Designs viewers were left in tears after a widow built her dream home with the help of her ‘gorgeous’ family.

Teacher Gretta was living in a caravan in the grounds of her sister’s home in Cambridgeshire, after moving back to the UK from Malaysia where she had lived with her husband Ray for 17 years.

When Ray died unexpectedly of a heart attack, Gretta made the difficult decision to move back. ‘I knew it was right to come back even though I miss Malaysia very much,’ she said. ‘It would have been very painful to stay.’

Gretta’s sister Mary and brother-in-law Fernando took her under their wing and offered to house her in a caravan in their garden.

The couple later decided to sell off part of the plot for £100,000 and Gretta jumped at the chance to build a permanent home so close to family. 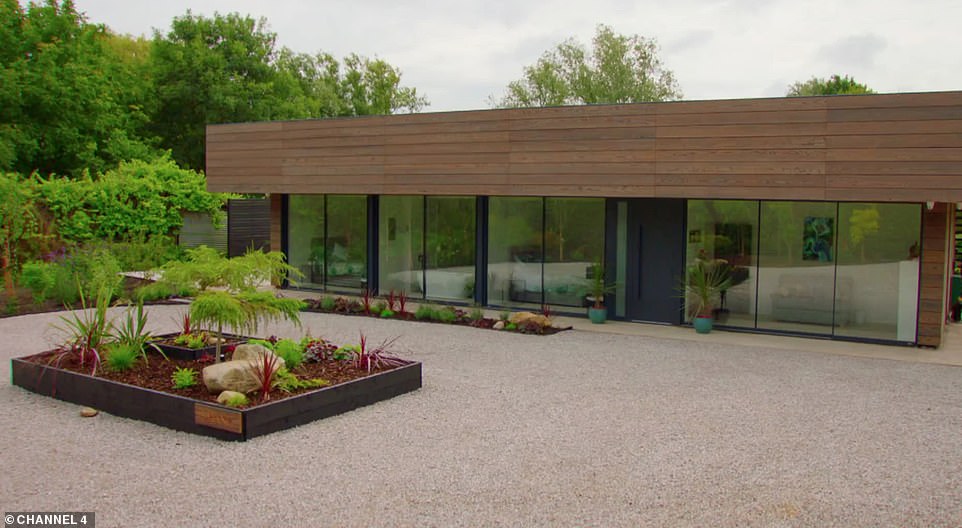 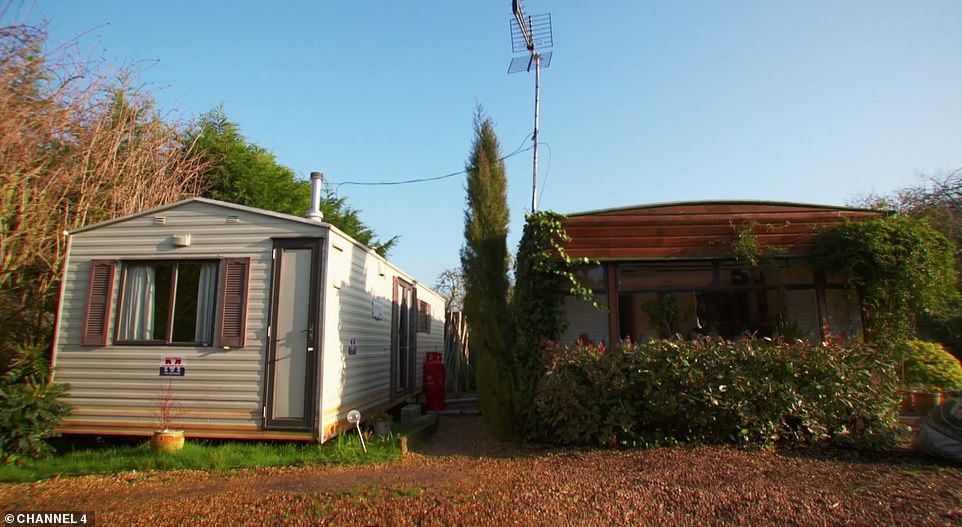 With no house to call home, Gretta’s sister Mary and Mexican-born brother-in-law Fernando took her under their wing and invited her to live with them in rural Cambridgeshire, in a caravan. The plot of land is pictured before the transformation 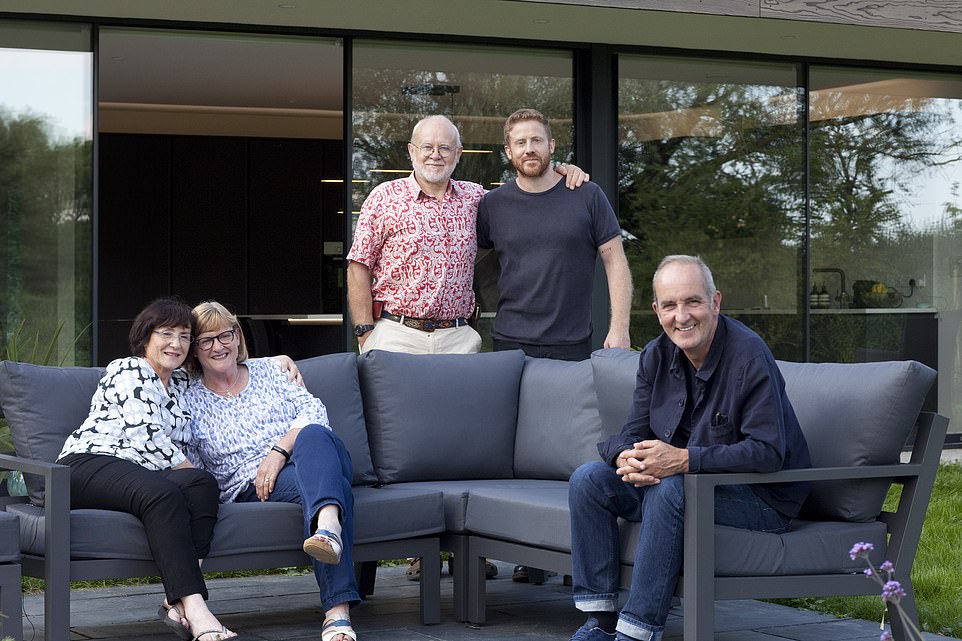 Gretta’s sister Mary and Mexican-born brother-in-law Fernando take Gretta under their wing and invite her to live with them in rural Cambridgeshire, in a caravan – before they set to work on her own project. Pictured, with Kevin McCloud

Gretta employed her architect nephew Carlos – Mary and Fernando’s son – to design her a Malaysian-inspired single-storey, burnt wood and glass pavilion, giving him a £300,000 budget.

‘It’s Grett’s new family home but at the same time, it’s on the land where I grew up and where we’ve had a family home for 30 years,’ Carlos said.

Keeping it firmly in the family, brother-in-law Fernando also stepped into the role of project manager, despite having zero building experience.

The final result left viewers in tears as Gretta said that her late husband would have ‘loved’ the property’, with one writing:  ‘Lovely family, beautiful house. Wishing them all happy times ahead’.

Another said: ‘Bloody hell, Grand Designs had me in tears tonight. What lovely, lovely people. Not a hint of smugness or ego or delusional or unreasonable behaviour in sight. I’d like to be their neighbour.’

‘One of the most beautiful homes I’ve seen on here, I could honestly say I’d be perfectly happily living there and would not change a thing!’, wrote a third.

The transformation left viewers in tears as Gretta said that her late husband would have ‘loved’ the property’, with one writing: ‘Lovely family, beautiful house. Wishing them all happy times ahead.

Admitting they’re both quite feisty personalities, Carlos said: ‘There’s a bit of Mexican in both of us.’

As site clearance began, so did the pandemic. Patriarch Fernando found he had to bite his tongue now his designer son had effectively become his boss. And family harmony was tested when his beloved apple tree was condemned for removal by Gretta.

The ambition was to rebuild a new life for Gretta in the embrace of loved ones, but it was clear the stress of building a house together was presenting real dangers for on-going family harmony. 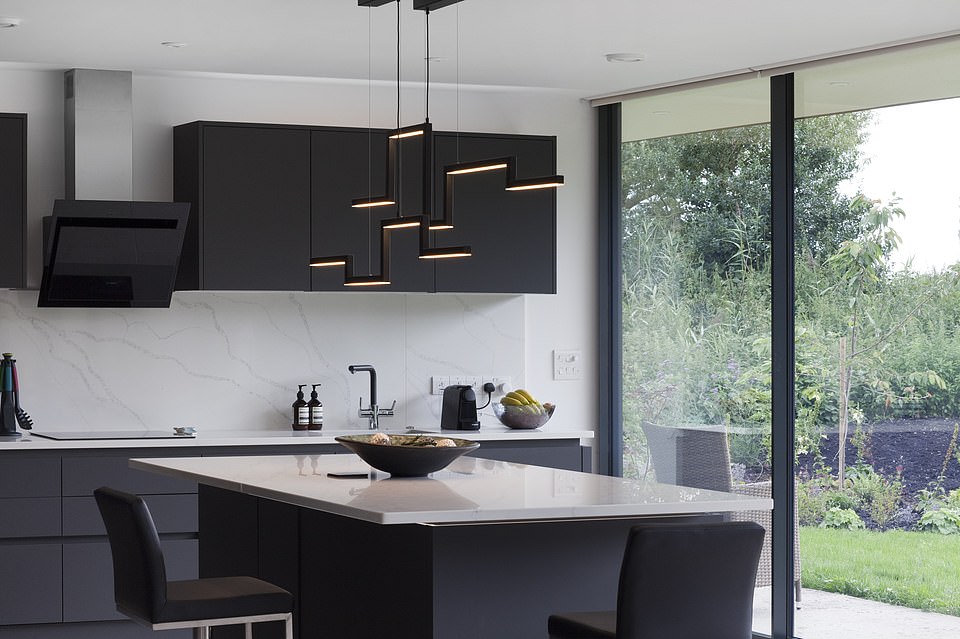 In tonight’s episode of Channel 4’s Grand Designs, teacher Gretta who wants a fresh start in Cambridgeshire has an Malaysian-inspired burnt wood and glass home designed. The kitchen was given a sleek and modern make-over and features huge windows to take in the stunning country views 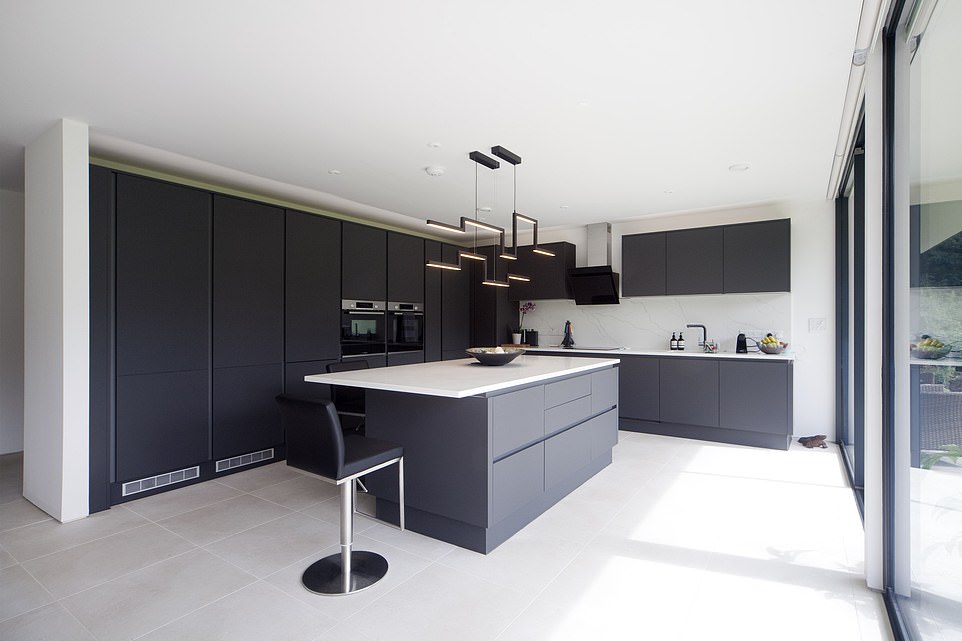 Speaking to Kevin McCloud about her plans, Gretta said: ‘It was really funny actually because they were like, “Grett you can have what you like now.” I submitted it to Carlos and he was like, “Wow, I didn’t see that coming at all.” I want open plan, modern, lots of glass, quite minimalist.’

Mary added: ‘It’s very much like the feel of the houses you’ve had in Malaysia isn’t it.’

Presenter Kevin McCloud explained the design required deep piles to pin it to solid rock buried deep beneath the soil.  He continued: ‘The roof is infilled with highly insulated SIP panels to form a massive room terrace which is extended out by 2 metres all round to create an overhang – a design feature borrowed from Malaysia.’

Carlos planned to clad the walls in a special burnt wood cladding, while the front and back of the building were glazed floor to ceiling to give a powerful connection to nature – a feature Gretta was familiar with in the far East. Tiling connects the outside in via sliding doors to an open plan living room, dining and kitchen area. 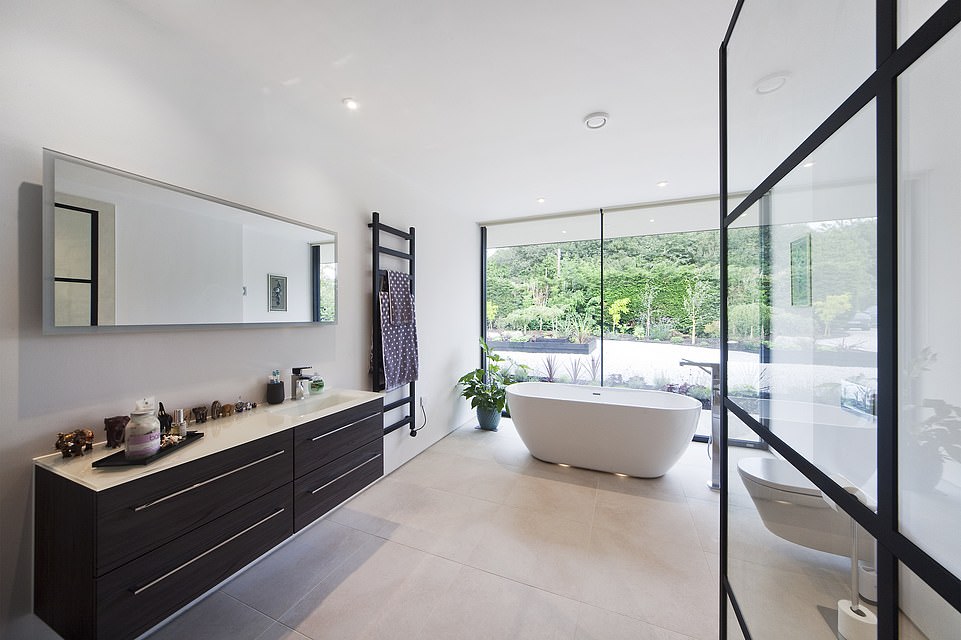 Gretta explained how she was building a new life in a place where Ray knew and loved. Pictured, the bathroom featuring a stand alone bathtub, neutral flooring, dark units and a wall of windows 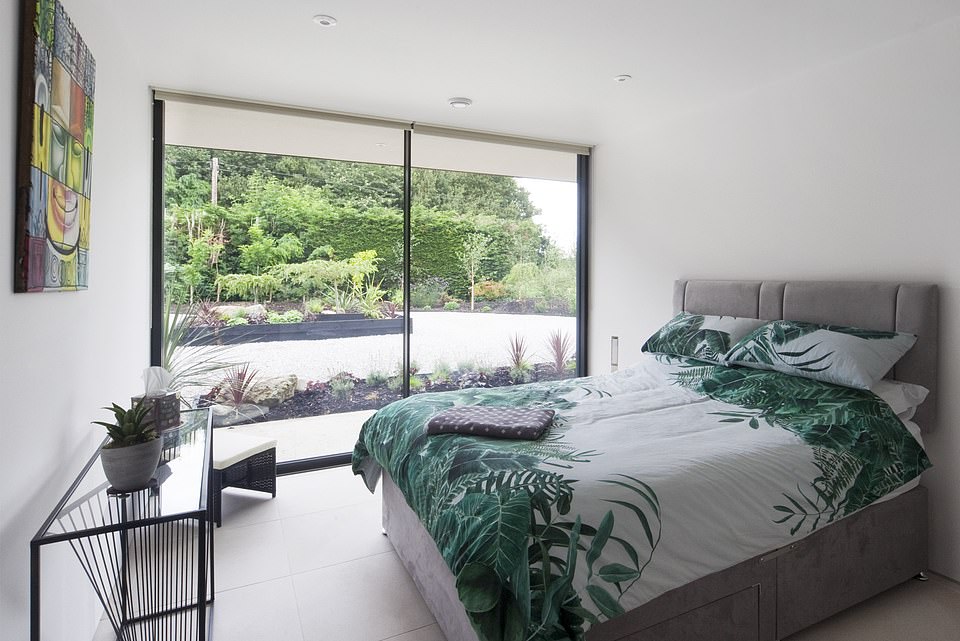 The interior and exterior of the build resembles the feel of the houses Gretta had in Malaysia. Pictured, the stylish bedroom which features a wall of windows and sleek modern furniture

The family encountered their first hurdle days into the build.

‘The finished look of the house is super important,’ explained Carlos. ‘I’ve got this lovely finish which is an Asian technique of charring timber and it really nods to the Malaysian influence.’

However, Asian style comes at a price – an extra £10,000 – and with her eye on the budget, Gretta said she would rather go with a cheap render.

‘A change like this could really, really ruin the design so I’m desperately hoping she’ll be convinced,’ he added.

Soon, it became a case of design purity versus family harmony.

Fernando added: ‘He will guard his design like a Pitbull Terrier. Because I’ve never done this I want to make sure the budget is controlled. We mustn’t let Grett down.’

But when Gretta worried black cladding might look too heavy, Carlos found a manufacturer with lighter options.

‘Yes it is more expensive, but there are certain things you think it’s worth spending more on to get the effect that we want,’ she said.  However, the decision took Gretta beyond her £300,000 building budget. 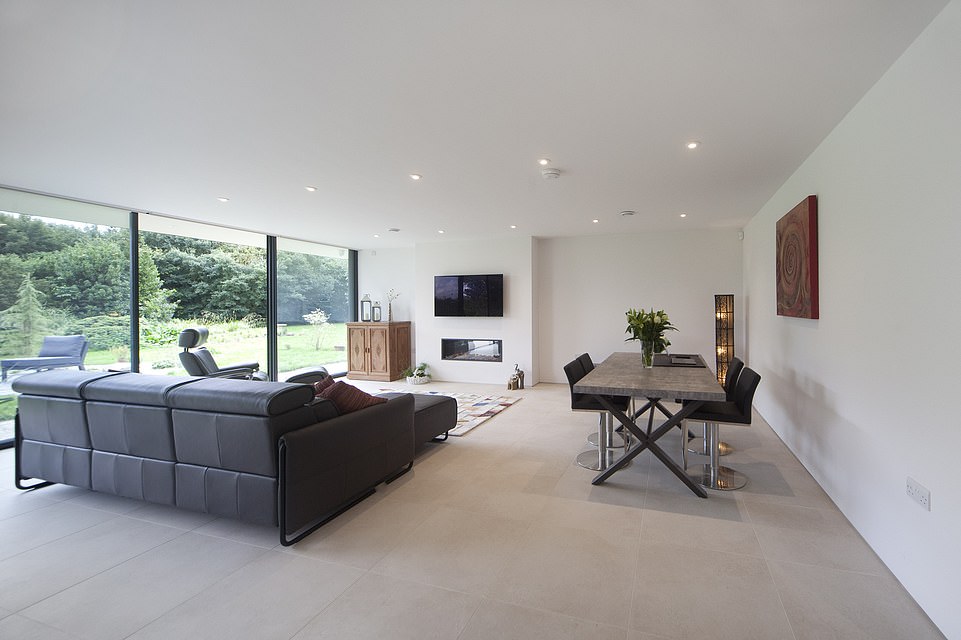 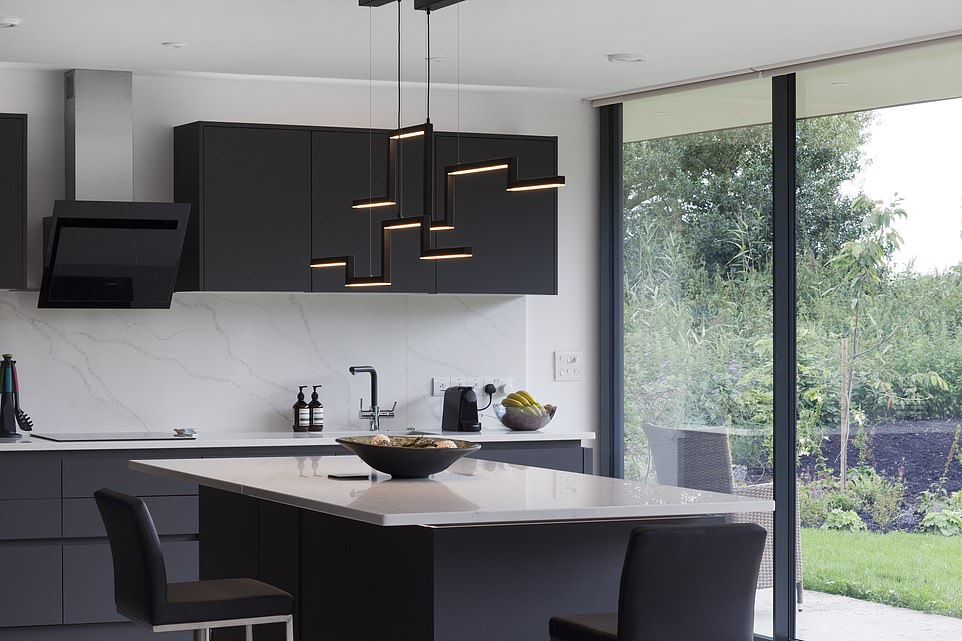 The ambition was to rebuild a new life for Gretta in the embrace of loved ones. Pictured, the modern-looking kitchen featuring a fashionable lighting fitting and marble tiling

Soon, Covid-19 struck again and Carlos had to stay away. First-time project manager Fernando was left to rely on his own judgement – and there was an important decision still to make about the apple tree – which sat right on the end of the footprint.

However, leaving the tree would push the edge of the new building within 3 metres of Ferndando’s house – too close for Gretta.

‘If it can be saved, then we will do our best,’ said Gretta, before revealing: ‘The apple tree had to go. That was probably the biggest issue, if you like. We’ve moved on from that now.’

Fernando added: ‘Here was my baby. Absolutely lovely tree. My children used to play on it all the time. I would’ve loved not to have cut it.’

With lockdown restrictions lifting, workers could return to site but with a quantity surveyor reassessing the project to a cost above £400,000, Fernando decided against using a tried and tested steel fabricator and opted for a one-man band instead – saving £12,000 in the process.

But gambling on a first-timer is a risk – and Fernando, who admitted he thought they would’ve been further ahead of schedule, was still adamant the project would be finished on time. 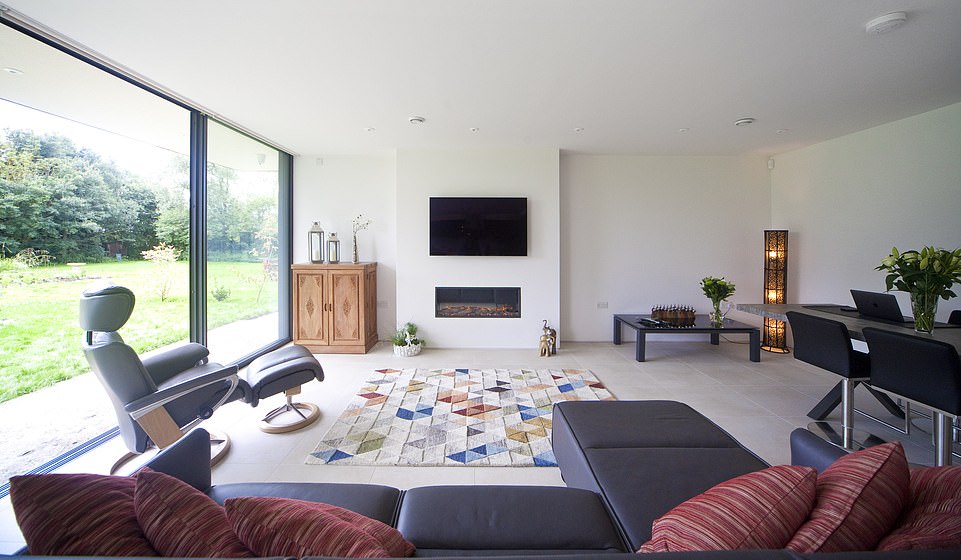 Fernando notes how Carlos is uncompromising on anything to do with design during the build. Pictured, the living room decorated with Malaysian-inspired art 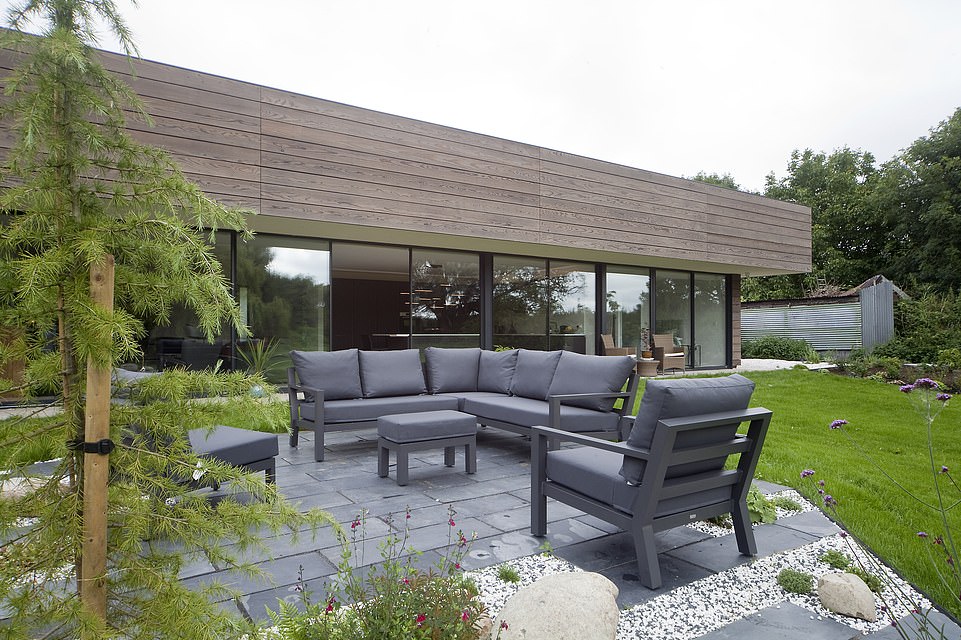 With an initial budget of £300,000 and a schedule of just seven months, the family are up against it for such an ambitious build. Pictured, the garden

‘To have a Christmas with her kids in the new house is very meaningful to her – and that’s what I’m aiming for,’ he said.

But after delays with the cement, reality dawned that Fernando just couldn’t get the job done in time. And the desire to maintain the quality of Carlos’ design had blown Gretta’s original budget.

‘Carlos is uncompromising on anything to do with design,’ said Fernando.’ He’s a b****r for that! Let’s say the windows, which were £13,000 expensive – that’s a lot. There’s a lot of detail I haven’t catered for – such as the window frames.’

But ultimately, by May 2021 the project was near complete and months later, with the exterior of the home complete, host Kevin was able to visit the finished property. It went £150,000 over budget, bringing the total to £450,000.

Static caravans were a distant memory, replaced with elegant landscaping representing the home’s eastern roots, while the roof terrace was still a work in progress, but offered incredible views.

In the transformed home spaces were clean, simple and generous and feature memories of Greta’s memories in Malaysia, with the kitchen resembling that of her home in the country.

Speaking of her late husband, she said: ‘He would have loved it, completely, he’s here in spirit for sure. I was when I was making decisions thinking “What would Ray do?”.

‘Nothing will replace Ray but the family have been fantastic at advising, helping, stepping in there.  Overall I think I’m stronger than I think I was.’