Glamorous Godalming! Striking Art Deco house in Surrey that appeared on Grand Designs in 2007 is listed for £1.6m – FOUR TIMES the amount it cost to build

It brought the glamour and elegance of 1930s Hollywood to Surrey. And now a striking Art Deco house that appeared on Grand Designs more than a decade ago is for sale.

The distinctive five-bedroom house in Surrey’s Godalming is on the market for £1.6million, having cost a quarter of that amount to build in 2006. It featured on Grand Designs the following year.

The property includes classic touches of the Art Deco style, such as black tiles in the bathroom, majestic curved walls and a rendered exterior. 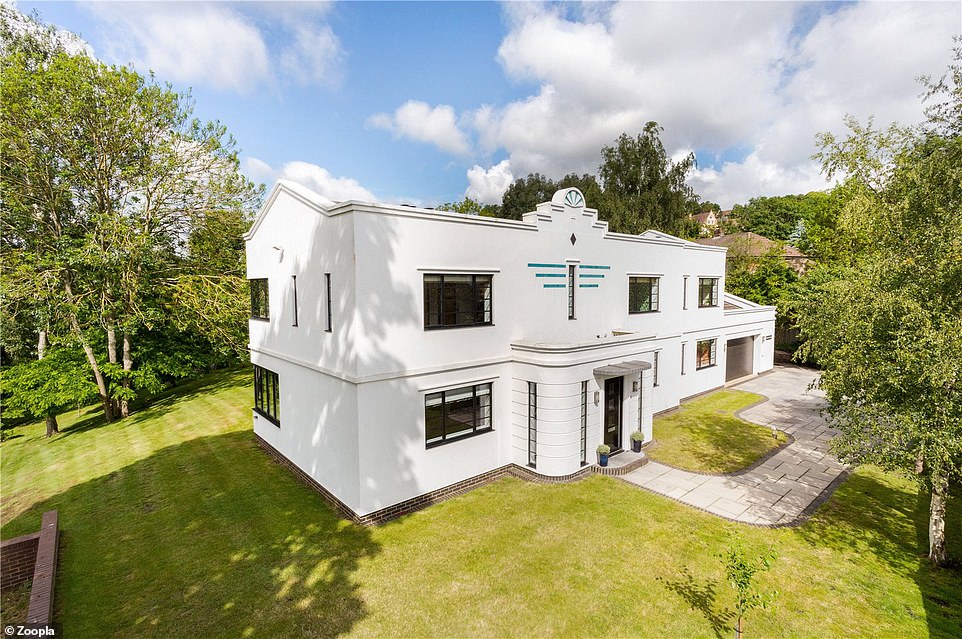 Glamorous: The distinctive Art Deco house in Godaming is on the market for £1.6m via estate agents Hamptons International 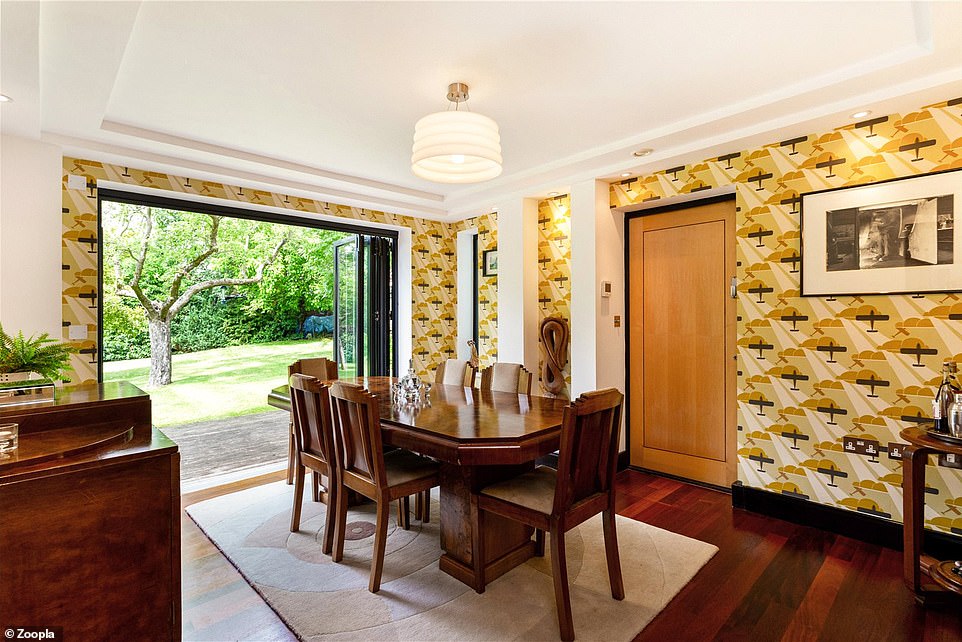 The interior includes some original pieces of Art Deco furniture, including this refurbished dining table and chairs

The owners Andrew and Helen Berry spent £400,000 on the construction of the property, having initially started out with a budget of £340,000.

This did not include the cost of the land which the couple already owned.

They previously lived in a house on the plot, which they knocked down to make way for their Art Deco design.

The property’s price history on property website Zoopla reveals that the last sale took place on 14 October 1999. At that time, the former house on the plot was sold for £291,500. 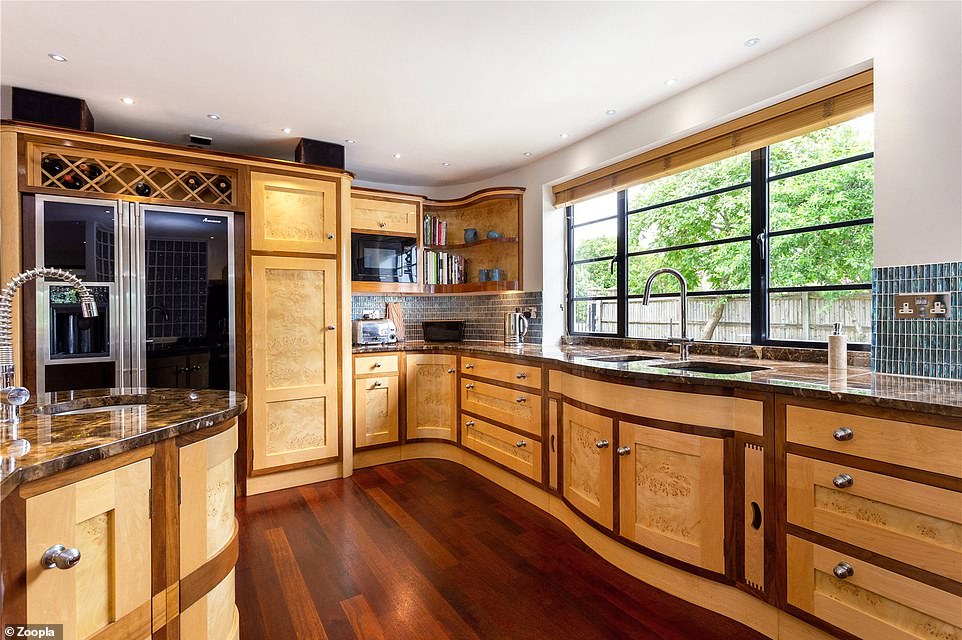 The bespoke kitchen has an Art Deco feel with elaborate curved cabinets, worktops and shelving 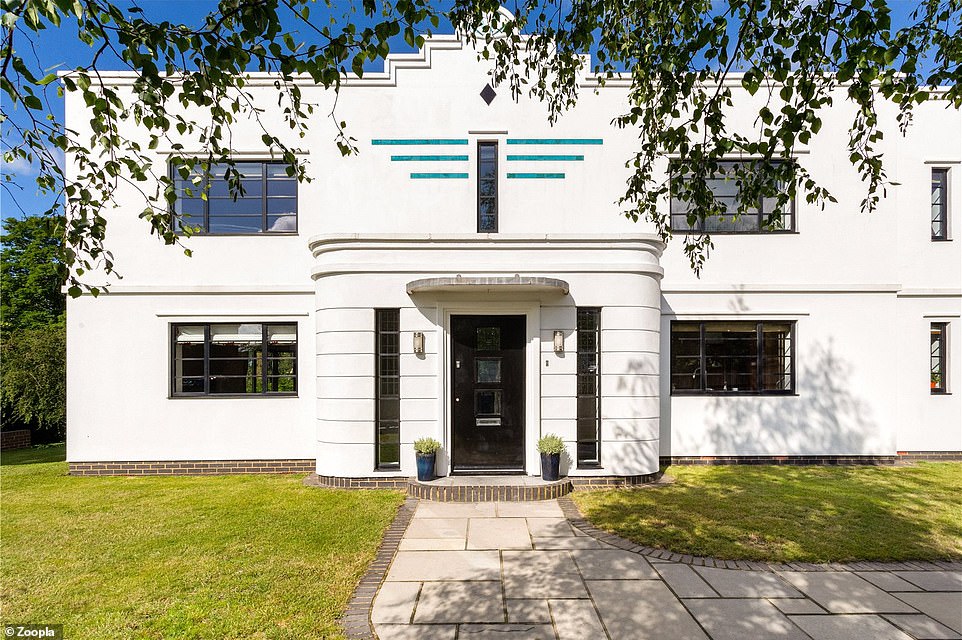 The outside of building has an ‘aeroplane’ motif above the door, inspired by the owners being pilots 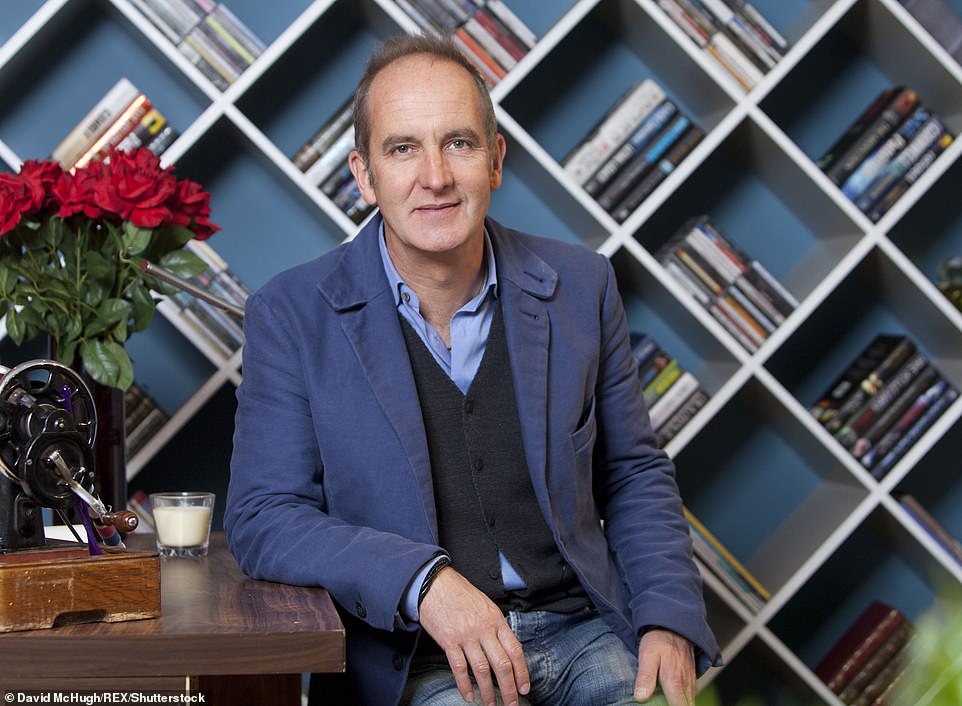 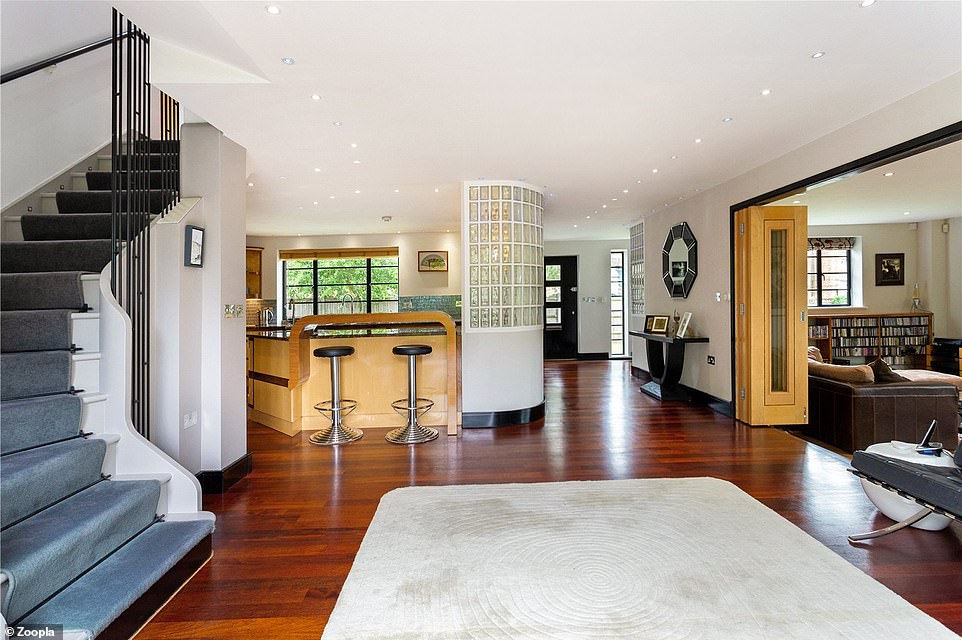 The couple were keen for the property to have some sustainable features, which included eco-friendly concrete and a large tank to harvest rainwater.

A metal balustrade lead upstairs to five bedrooms. There are four bathrooms including a Miami-inspired one with green and black tiling.

On the outside of building, above the front door, is an ‘aeroplane’ motif, inspired by the owners being pilots who fly around the world. 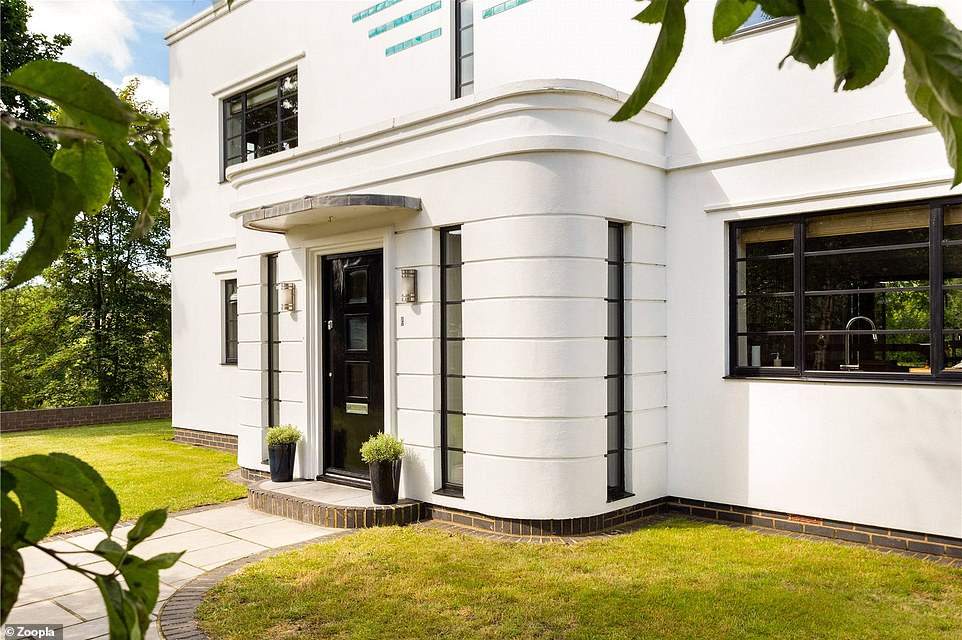 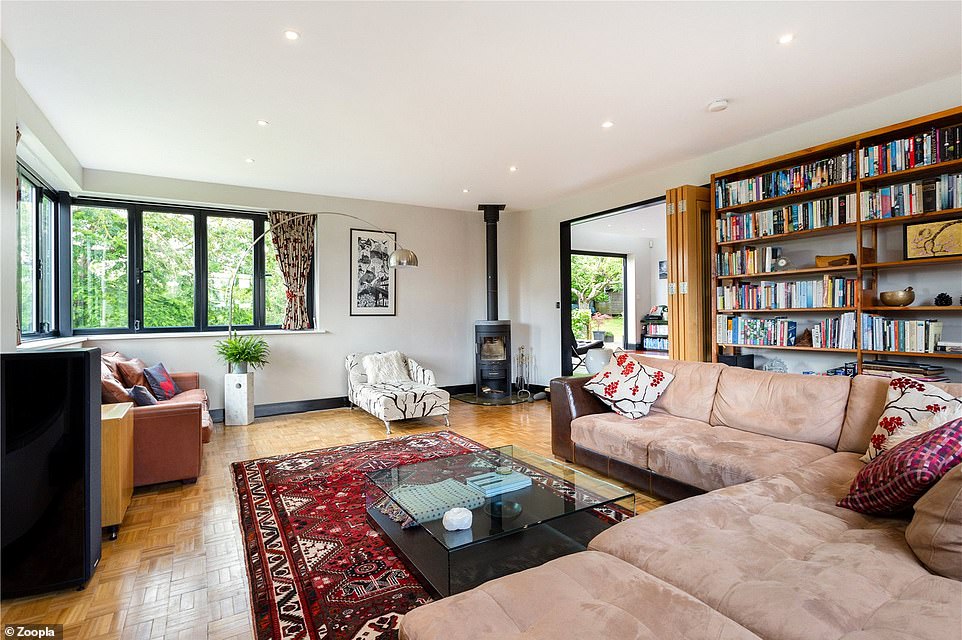 Designer touches: The large living room has a corner window and parquet flooring 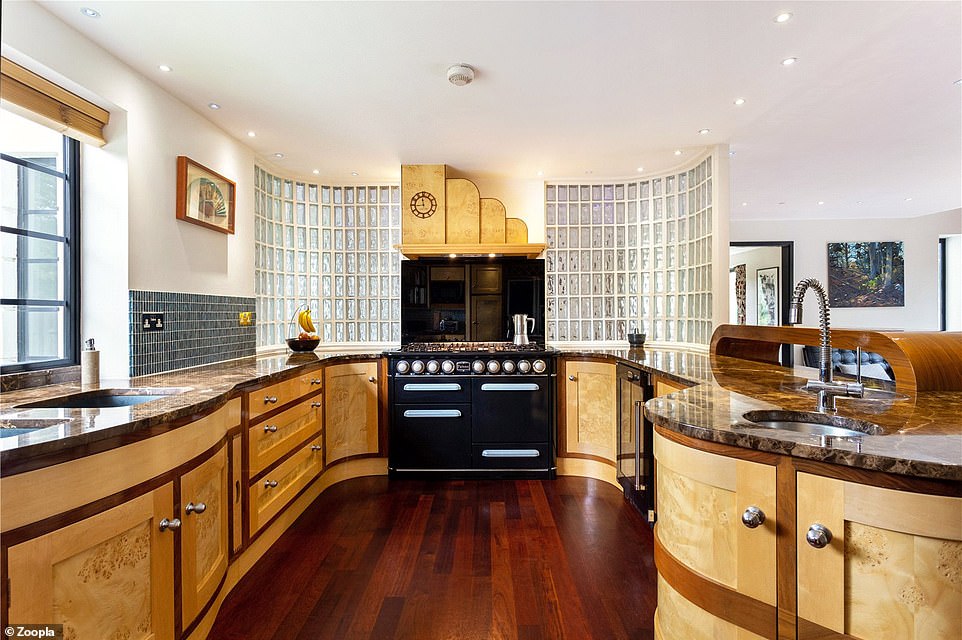 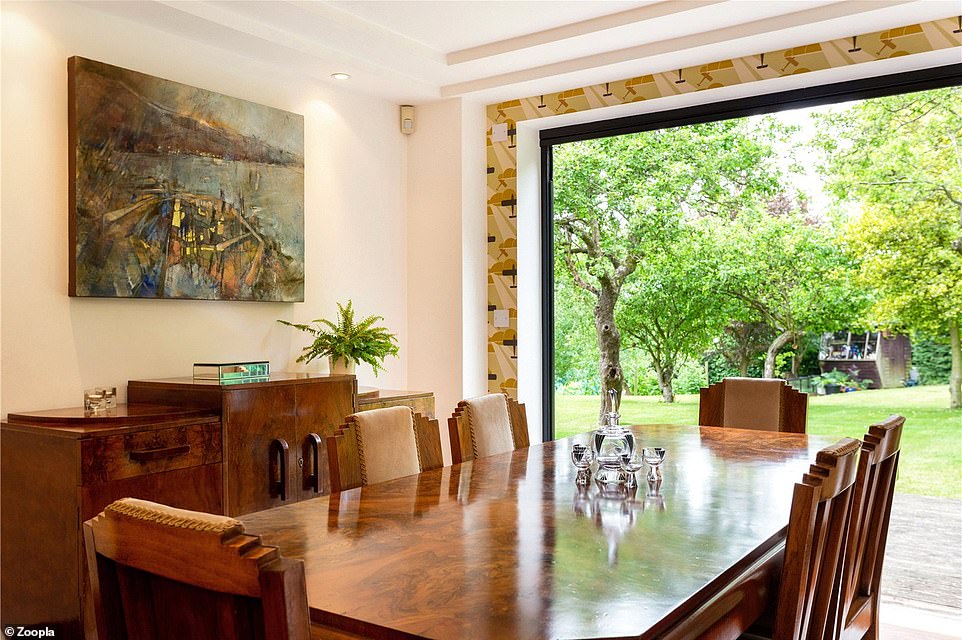 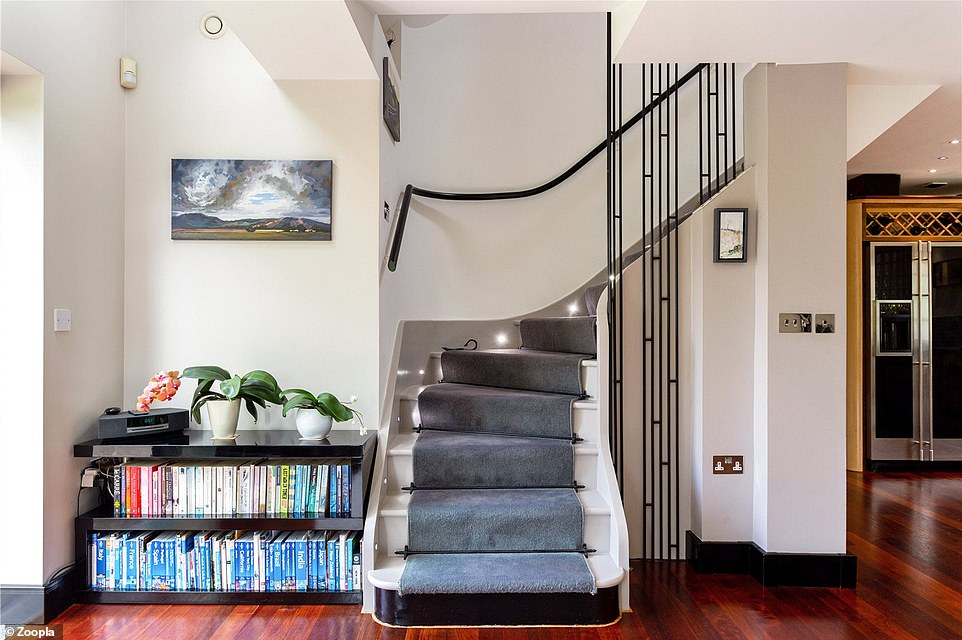 Kevin McCloud said in the programme, which aired in 2007, that the project had been an ‘adventure’ for the couple.

He said: ‘It has been a bit of adventure, as you started out with not much of a clue about what you were going to do inside this building.’

Owner Helen agreed, saying: ‘We embraced the Art Deco theme and we got more confident in what we could achieve. Things have evolved as we have gone along. You need to be quite brave to create something like this and we are glad that we have been brave.’

Architect Trevor Adams explained: ‘It’s an era of architecture that most people are familiar with.

‘It’s the spirit of the thing that counts, but equally but if you’re going to do these things, then you have to do them with a level of authenticity that makes them believable.’ 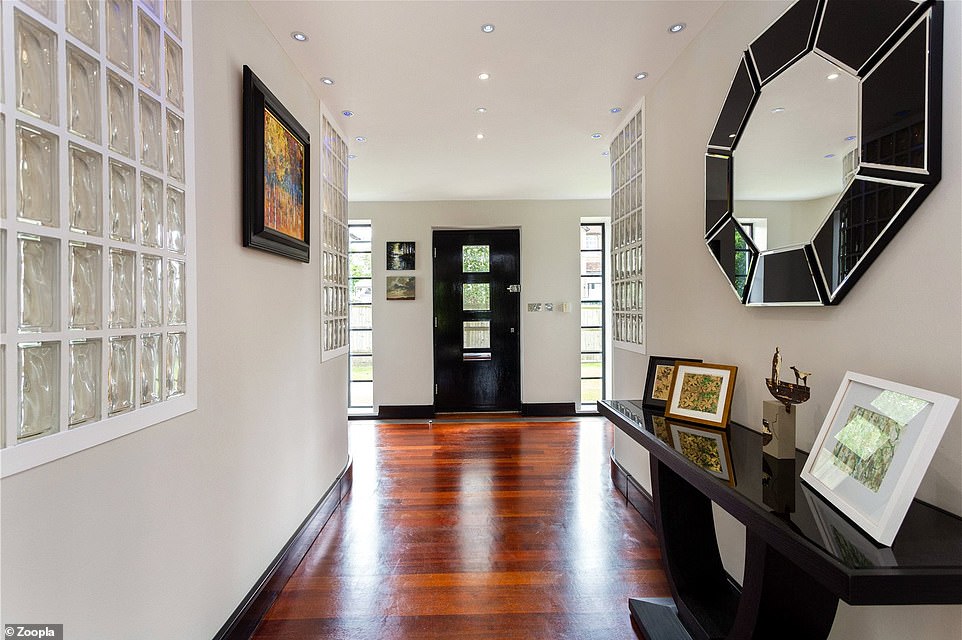 Monochrome: Black and white features heavily in the entrance hallway of the Surrey home 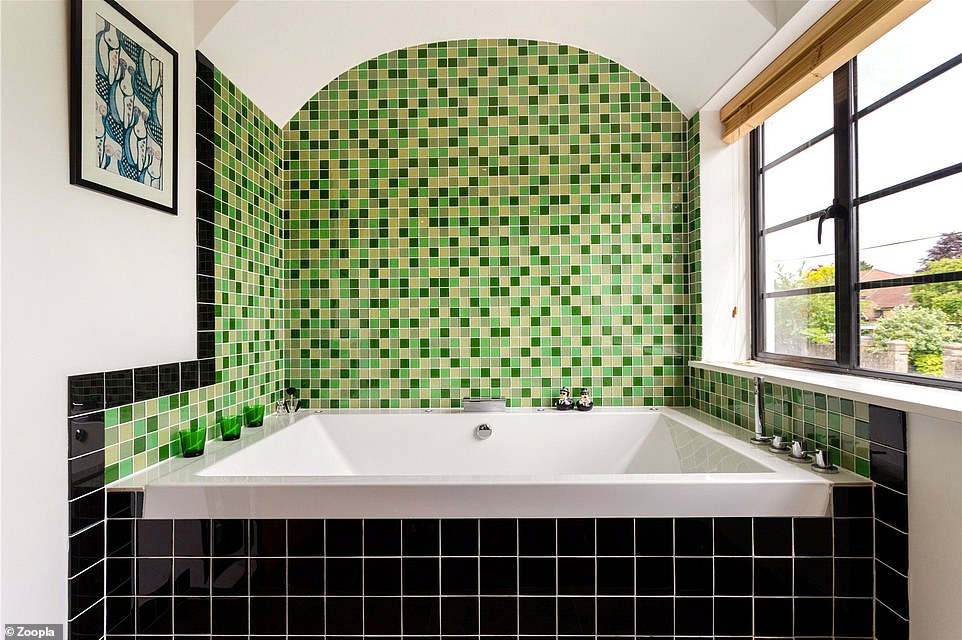 The Miami-inspired bathroom has green and black tiling, set against the white walls 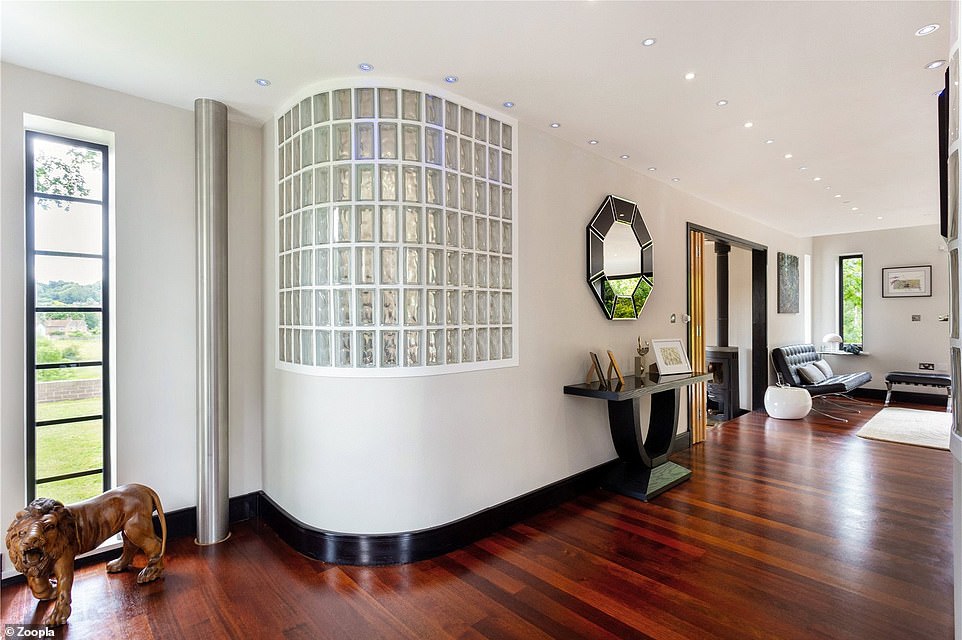 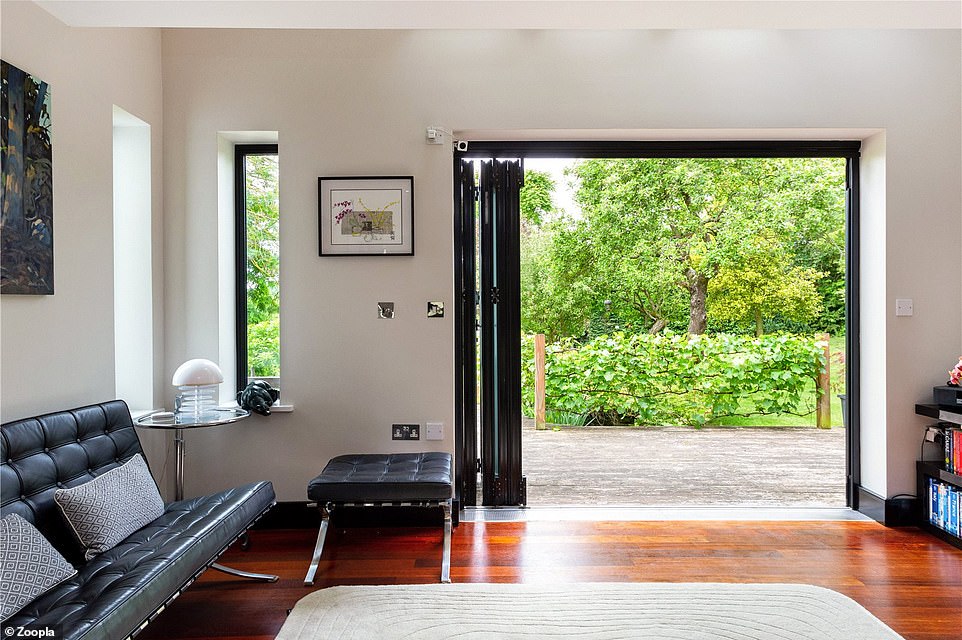 Bringing the outside in: There are plenty of windows that light the light flood into the house

The property is listed for sale via estate agents Hamptons International and is in Nightingale Road, Godalming.

The average price of a property in Godalming is £619,955, which compares to £312,681 for the country as a whole, according to property website Zoopla.

Five miles north of the property is Guildford, which has a variety of shops, a cathedral and fast train links into London Waterloo.

Laura Howard, of Zoopla, said: ‘This Art Deco family home in affluent Godalming, Surrey, is on the market for a heady £1.6million.

‘But, as well as five bedrooms, four bathrooms, four reception rooms and nearly an acre of space, the lucky new owner will be able to say that no-one else in Britain owns a property that’s anything like theirs.’ 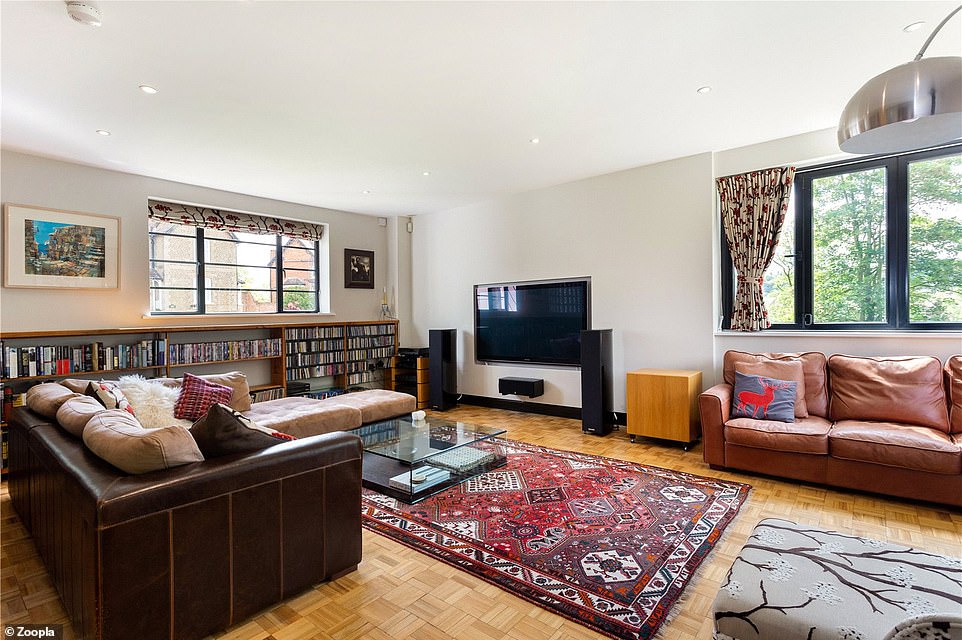 There are four reception rooms in the house, which sits in almost an acre of space 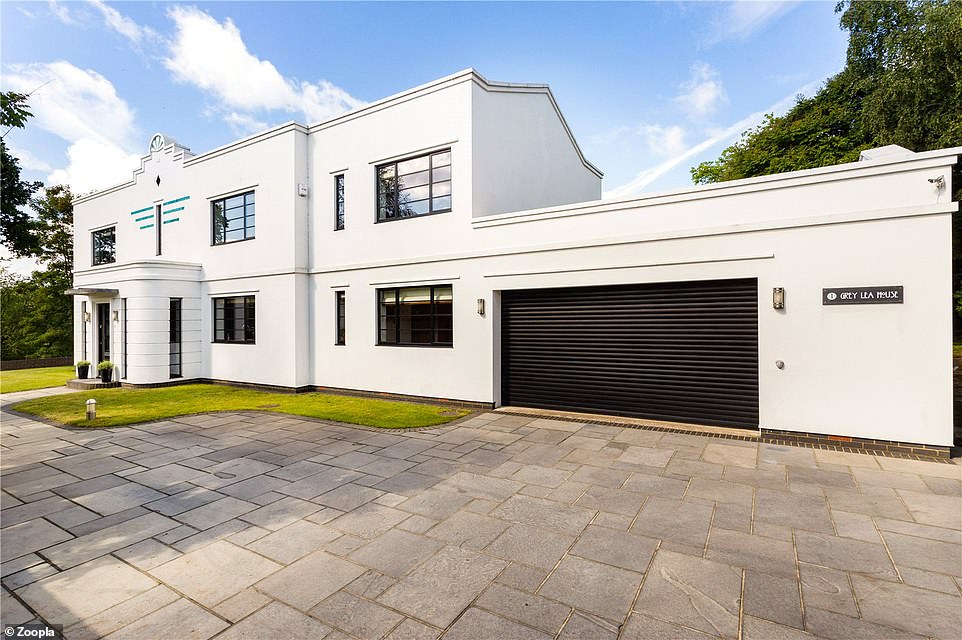 There is a double garage, which comes with lighting, heating, insulation and a water supply 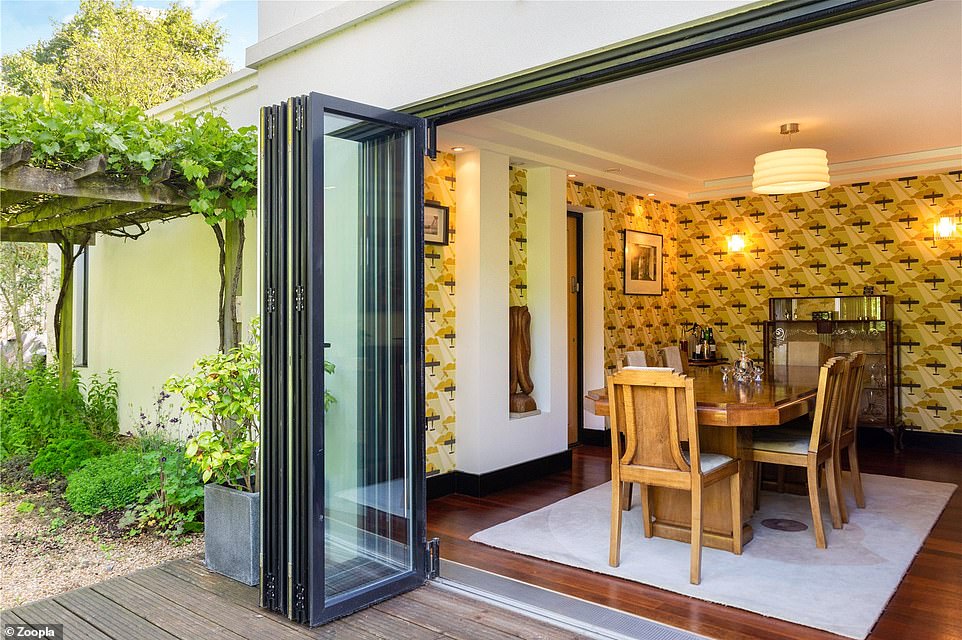 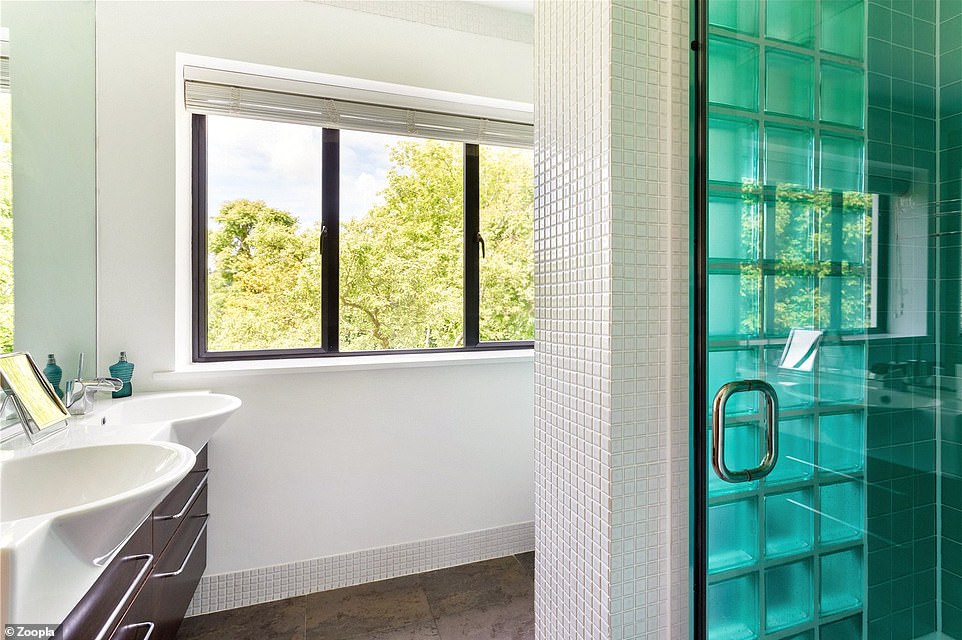 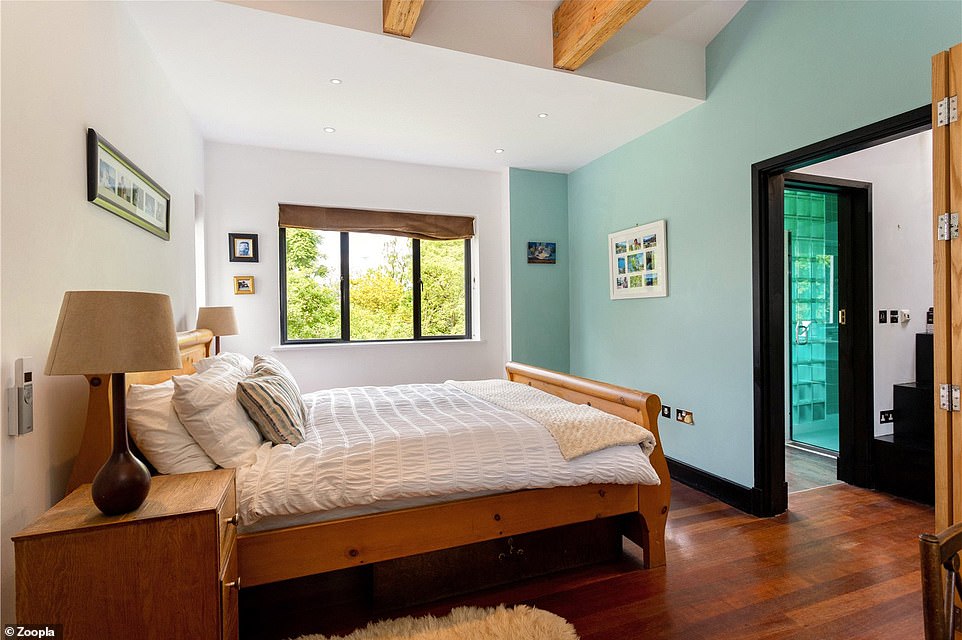 A family home in Surrey: The property has five large bedrooms, some with garden views 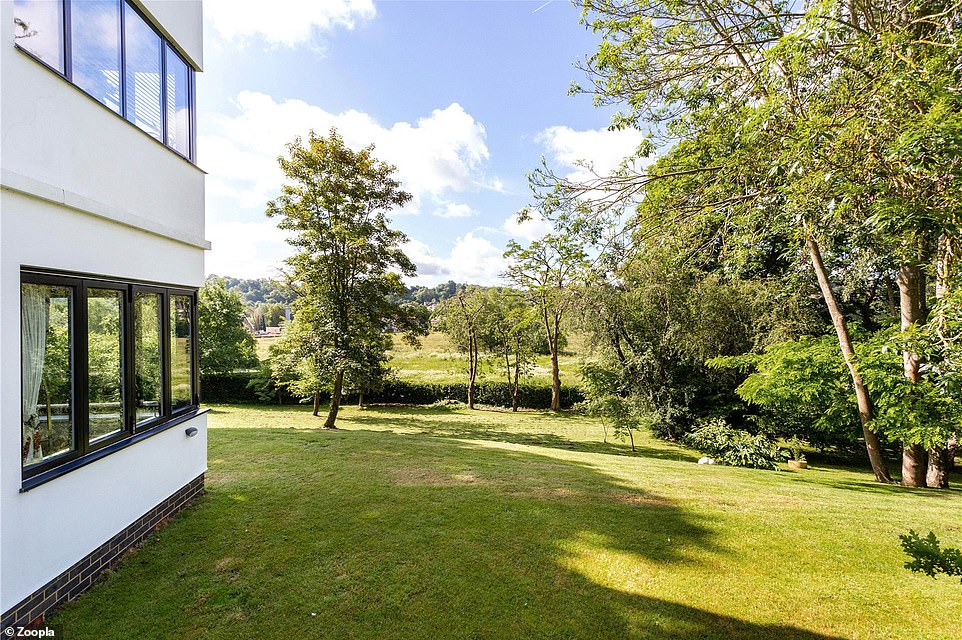 The property is in Nightingale Road, Godalming, and five miles from Guildford