Jacob Rees-Mogg has been urged to consider allowing survivors of domestic abuse to give evidence online instead of in Parliament when MPs return to Westminster next week.

Eighteen domestic abuse and women’s rights organisations have written to the Leader of the House of Commons to state it is ‘unacceptable’ to be expected to give their views on the Domestic Abuse Bill in person as it puts them at risk of contracting Covid-19.

The letter claims the requirement for women who have experienced domestic abuse to physically attend Parliament is discriminatory and unsafe.

It highlights how these arrangements could put the health of witnesses and those supporting them, particularly from black and ethnic minority communities which are believed to be more vulnerable to the deadly virus, at risk of exposure. 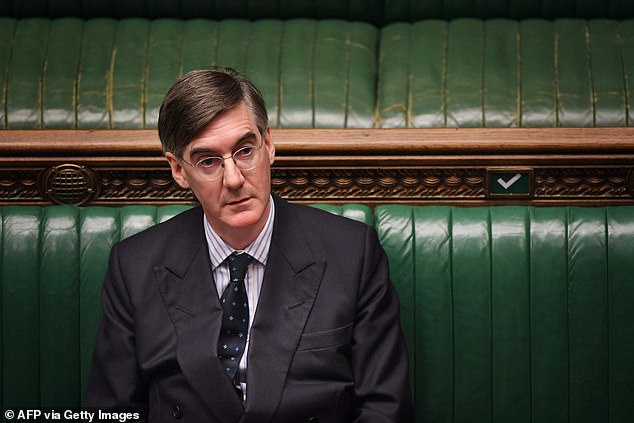 Next week a parliamentary committee will hear from domestic abuse survivors as part of its work scrutinising the Domestic Abuse Bill.

The House of Commons is currently using a ‘hybrid’ system which allows a maximum of 50 MPs to be present in the chamber, while up to 150 can take part using video calls.

However, the Commons Leader said the current set-up dramatically curtailed the amount of time which could be spent debating legislation and that all MPs should come back to London on June 2.

The letter has been sent before MPs return to parliament next week and includes input from organisations including Women’s Aid Federation of England, Latin American Women’s Rights Service and Southall Black Sisters.

Nicki Norman, acting co-chief executive of Women’s Aid, said while they welcome the Public Bill Committee’s decision to hear the expert evidence of domestic abuse survivors, it is ‘clearly wrong’ to require them to give it in person. 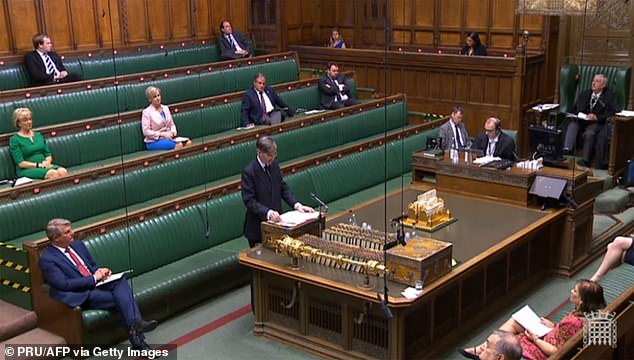 The House of Commons is currently using a ‘hybrid’ system which allows a maximum of 50 MPs to be present in the chamber, while up to 150 can take part using video calls

She said: ‘It will put survivors and staff supporting them at risk and force them to breach current government guidance. The government must urgently reconsider this requirement.

‘We also urge the Bill Committee to make time to hear from a wide range of organisations working to end domestic abuse, including organisations supporting marginalised survivors whose voices are often unheard.’

Gisela Valle, director of Latin American Women’s Rights Service (LAWRS), said they welcome the opportunity for migrant survivors of domestic abuse to present their experiences to the Public Bill Committee.

However they too are ‘highly concerned’ that survivors have been asked to attend Parliament in person amid the pandemic, and called out ‘its disproportionate effect on BME communities and social distancing measures’.

We are writing to express urgent concerns about the current proposals for evidence to the Public Bill Committee on the Domestic Abuse Bill.

Following our previous correspondence with the Home Secretary and Lord Chancellor, which you were copied into, we are pleased that survivors of domestic abuse have been prioritised to give evidence to the Committee.

As ‘experts by experience’, their views and insights are essential for effective scrutiny of this important legislation. However it is unacceptable, in the context of coronavirus pandemic, that survivors will be required to do so in person because the Committee will be operating in physical form only.

We know that, following the Parliamentary recess, the ‘hybrid’ House of Commons will end. However, around the country, many people continue to self-isolate and shield to protect themselves, their vulnerable family members or to protect family members who are key workers.

Structural inequalities, which produce health inequalities, are resulting in disproportionate rates of mortality within black and minoritised communities and amongst older and disabled people and individuals with these protected characteristics therefore continue to be at risk.

The current pandemic has necessitated alternative ways of working – including within parliament, where effective mechanisms for witnesses to give evidence to Select Committees have already been established. It is vital that this flexibility is retained to ensure that survivors can deliver evidence safely to the Public Bill Committee.

Witnesses whom some of our organisations are supporting to give evidence include women with childcare responsibilities, who are not able to secure alternative childcare arrangements whilst adhering to current social distancing guidelines.

Another witness has disability and accessibility requirements and would therefore need someone to break social distancing guidelines to support them in navigating Westminster.

Witnesses would also be required to use public transport to make journeys which are not essential, given that remote evidence is a clear option. The insistence on giving evidence in person also excludes any survivor or organisation in Wales from engaging in legislation which will impact upon them, as leaving home and travel restrictions within Wales are currently more stringent.

Whilst giving evidence to a Parliamentary Committee is intimidating for most, survivors will be detailing some of the most traumatic experiences of their lives. Some of our organisations will therefore need to support the witnesses in delivering evidence, which of course will necessitate further unnecessary journeys.

When supporting survivors to give evidence to the Joint Pre-Legislative Scrutiny Committee, our organisations were able to advise on questions and guidance for members of the Committee to ensure scrutiny was safe and appropriate. We hope you will reach out again to our organisations for this advice and guidance.

The requirement for survivors to attend in person makes the process inaccessible, unsafe and is clearly discriminatory. It will put the health of witnesses, particularly those from BME communities, at risk. It would also mean that the survivors and our organisations are being pushed to breach government guidance and our own risk assessments for what is currently safe practice.

We urge you to ensure to reconsider and ensure that survivors and other witnesses can deliver remote evidence to the Public Bill Committee to protect their health and safety. Due to the urgency of the Bill proceedings, we would appreciate a response to this issue as soon as possible.

Ms Valle added: ‘This is unnecessarily exposing them to the risk of infection. For all these reasons, we are calling on the Government to prioritise the safety of survivors and to enable witnesses to present evidence remotely.’

Pragna Patel, Director, Southall Black Sisters, told how they were pleased to address the growing gap in protection from abuse for migrant women with No Recourse to Public Funds.

However, she added: ‘This unacceptable condition of attendance only serves to jeopardise the safety of survivors and their key workers, as well as flout the rule on non-essential travel. In a context where facilities exist for participants to give evidence remotely, there is no justification for the requirement.

‘Given that BME groups are amongst those disproportionately affected by Covid-19, BME survivors and the staff who support them will be placed at unnecessary risk. We urge the Government to reconsider.’