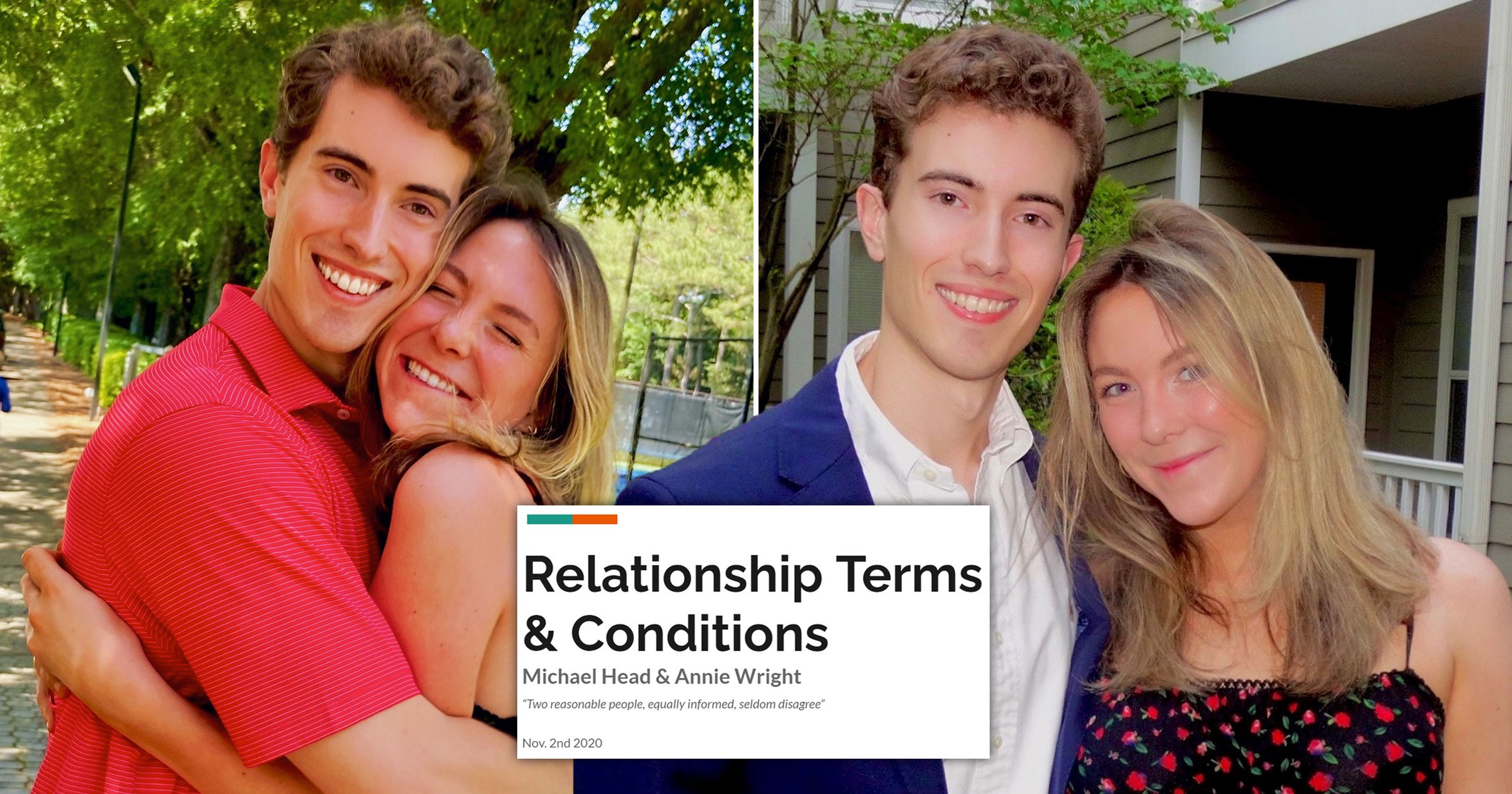 A girlfriend drew up a 17-page ‘relationship contract’ with her boyfriend just two weeks after they met on Tinder – asking that he pay for date nights, buy flowers twice a month and work out five times a week.

Annie Wright met her boyfriend Michael Head in October last year and after deciding he was ‘her person’ they agreed to be exclusive.

Determined to make the relationship work after having her ‘boundaries crossed’ in a previous relationship, 21-year-old Annie joked they should write down their ‘terms and conditions’ for dating – and law student Michael eagerly agreed.

Shortly after, risk management and insurance student Annie and Michael, 23, sat down and read out their own terms – including asking for ‘a romantic gesture once every two weeks’ and ‘working out at least five times a week alone’.

Other clauses included ‘no silent treatment’ and him paying for date nights.

Now Annie credits the lengthy 17-page contract as the key to their relationship success and even suggested they might give each other a ‘yearly review’ when they celebrate their one-year anniversary next month.

Annie, from Atlanta, in Georgia says: ‘This has been a game changer. I’d recommend all couples have one. It’s the best thing ever.

‘We treat our relationship almost like a business interaction. We deal with conflict like partners in business would.

‘We sit down and treat it more like we’re partners in life, and love is an added bonus.’

Annie had just come out of a long-term relationship last year when she initially planned to enjoy life as a single university student, partying and using dating apps.

But after matching with Michael on Tinder and inviting him on a dog walk, she knew instantly she wanted to make things work.

‘He was like “I want us to be boyfriend and girlfriend”,’ she remembers. ‘In order to be ready for that, we had to lay some serious ground rules.

‘I made the idea [about the contract] as a joke then he said “no, seriously.. We can do that and talk about it”.

Both Michael and Annie drew up their own contracts for each other, then presented them Apprentice style.

The pair aim to revisit the document every six months to make sure they are both getting their needs met.

Annie added: ‘When we rewrite it, I bet he writes “I want you to take your shoes off when you come into my apartment” because I always forget that.’

Rush Hour Crush – love (well, lust) is all around us

Tell us about your Rush Hour Crush by submitting them here, and you could see your message published on the site.