Students who have tested positive for COVID-19 have reported being sent germ emojis and abusive messages and being anxious about returning to classrooms as schools move to stamp out stigma and support isolating families.

Research by the Murdoch Children’s Research Institute as part of its COVID Wellbeing Study revealed negative attitudes to those who test positive for coronavirus and includes instances where children have been bullied once they return to school after isolation. 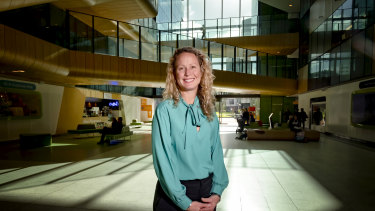 Lead researcher Associate Professor Margie Danchin said there was a persisting perception that a person was to blame if they contracted the virus.

“COVID has really been cast as this dirty illness associated with shame and the implication is the person infected has done something wrong and that’s so dangerous because we know COVID is in the community and people can be infected even if they follow public health advice,” she said.

“What we’ve seen is children receiving poo or germ emojis or abusive messages via texts and then bullying in schools once they return.

“It breaks your heart to hear the parents saying their child is so anxious before going back to school.”

The research looked at the experiences of 342 children and their families who were tested at the Royal Children’s Hospital between July and December 2020, 47 of whom tested positive.

One parent described bursting into tears on hearing their child’s diagnosis, while another said, “You just feel like a leper”. Another parent said they had been bullied in their own workplace.

Associate Professor Danchin said it was imperative schools spoke frankly about the issue and promoted kindness and acceptance.

“Schools need to be upfront to say ‘We expect infections, we can’t stop them happening, we need to do everything in our power to stop them but if they do happen we need to support that child and be kind’,” she said.

“It’s about modelling really positive behaviour; saying how can we be good friends?”

Rob Duncan, principal of Cranbourne West Secondary College, which has had one COVID-19 closure since reopening for term four, said the school tailored its response on a case-by-case basis to best serve the individual child.

“It’s about making them feel that it’s not their fault, that it can happen to anyone,” he said.

“They don’t want to be the one who’s responsible for a school closing, it’s a big thing for a 12-year-old to carry.”

Mr Duncan said a focus on social reconnection as children returned to the classroom after lockdown had been helpful.

“I know that one teacher just dropped a loaf of bread round to a family because they mentioned they were running out,” she said.

“There is that positivity but I do know that it’s very hard on families to be in quarantine, especially when the rest of school isn’t.

“I empathise and recognise when it directly affects you it’s very hard knowing you’re not in the same place as the rest of the school like when we were all in lockdown together.”

Victoria’s recent easing of restrictions means students and families who are primary close contacts will spend less time in quarantine and can return to the classroom as soon as they return a negative PCR test.

As of last week, Education Department figures show there have been 475 government school closures in term four. The majority have reopened within 24 hours.

Fascinating answers to perplexing questions delivered to your inbox every week. Sign up to get our new Explainer newsletter here.