Dustin is in the house! Gaten Matarazzo gave HollywoodLife an EXCLUSIVE update on the filming the next season of ‘Stranger Things,’ plus talks up his exciting partnership with NERDS candy.

2021 is poised to be a big year for Stranger Things fans, and it starts with one of its young superstars, Gaten Matarazzo. As we all eagerly await to see the next season of the smash Netflix show, Gaten, who plays Dustin Henderson, is currently still filming episodes, a process that he admits, like most things, has been affected by the pandemic.

“Slow,” Gaten says, when asked how production is coming along on season 4. “Slowly, but surely. [Filming] already is basically playing it by ear anyway, but the pandemic on top of it just makes scheduling a lot harder.” Still, the show is going on as best it can, and if nothing else, it means Gaten has been able to reunite with his co-stars, many of which he had not seen or been in touch with for months. 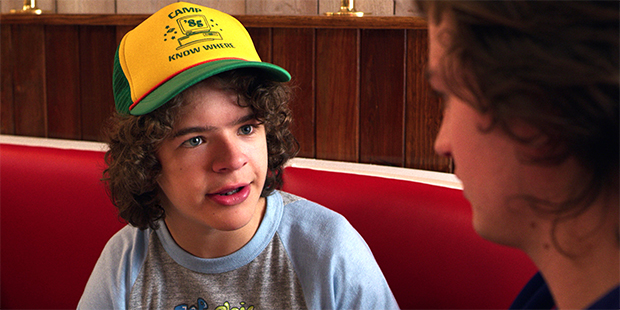 “Everyone’s great,” Gaten says, “I actually had not gotten to see anybody really during the quarantine at all. There was a stretch of 6 months where we really weren’t talking to each other a lot; we all had stuff going on at home. But that made going back a lot more fun.  The minute we stepped back on set, we said, ‘We have the coolest job on planet earth.’”

Aside from wrapping up the season in the coming year, Gaten is also working on a fun new project with NERDS candy. As part of the brand’s debut of their latest multi-texture invention – Gummy Clusters –  Gaten is inviting fans to interact with him on social media to be true nerds and come up with crazy hypotheses about the first-of-its-kind new candy. “Making the videos has been a lot of fun,” says Gaten, “And I like that they have fans participate in it as well. Fans can go to my Instagram and tell us how they think Gummy Clusters came to exist — because I’m still trying to figure it out and I need people’s help!”

So far, Gaten’s seen theories ranging from wizards in the clouds to mad scientists to a theory about ‘unicorn turds’, but at the end of the day, the experience is a chance to connect with fans and get a little, well, nerdy! “My nerdy friends and I stick together, and I love that we now have a new candy to enjoy.”

So, with all this talk of nerds and the word becoming synonymous with Stranger Things since season 2, it begs the question — who is the biggest nerd in the Stranger Things cast? “Probably me,” he confesses. “Out of the kids, for sure me. Finn Wolfhard’s up there too.” But then, reminded of a recent game of Dungeons & Dragons that he filmed with some of the cast at the end of last year, he adds one more name to the list. “David Harbour’s kind of a nerd. David’s the one who pitched the D&D idea, and I was all in… He doesn’t seem that way upfront, but you get to know him.”