Melbourne's Comedy Festival has reversed a decision to keep registration fees paid by comedians who never got to perform, after coming under pressure from the artistic community and government.

Anger spread through Australia's comedy community on Thursday night after they received an email from organisers saying their Melbourne International Comedy Festival registration fees would not be refunded – despite the festival being cancelled before it could begin due to the coronavirus pandemic.

The standard fee was $525 for Australian performers presenting a show at the festival – more for international artists and less for one-night gigs. Altogether it represented hundreds of thousands of dollars worth of income for the festival. 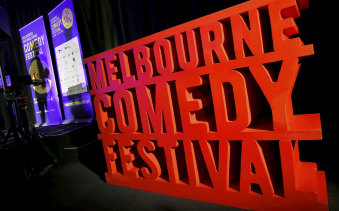 Melbourne International Comedy Festival was cancelled in the wake of the coronavirus pandemic. Credit:Darrian Traynor

The email said "many outcomes associated with registration fees had already been delivered" such as the official program guide, registration portal, website, publicity and promotion.

A festival spokeswoman said performers would be refunded all venue-related fees in full, which represented a much bigger fraction of the costs for comedians. She emphasised that the festival had already invested heavily in preparing the festival and promoting it.

The festival has also set up a donation process on its website to allow ticketholders to contribute directly to artists and support crew. If ticketholders decide to donate their ticket price rather than seek a refund, the entire amount (minus a credit card fee) will go back to the artists.

But comedians were aggrieved by the email, taking to social media to share their shock and anger. For some performers the festival provides a big chunk of their income for the year – and with live performances, tours and festivals cancelled worldwide they are in immediate financial straits.

Comedian Mitch Garling asked why the registration fees rather than government grants were being used to cover the festival's marketing costs.

Simon Green, an artist who has performed at previous festivals, said he was "disgusted" to hear of the decision.

"What sickened me further was seeing your social media encourage the community to give refunds back to artists, while you yourselves are not helping," he wrote in a letter to the festival. "You know more than anyone the difficulties artists face scraping together money to put up their shows. Artists are consistently researched as some of the least paid workers in Australia.

"You are a long-established institution with far more protections than the average artists."

But the festival will face its own financial woes with the loss of the majority of its 2020 revenue.The City of Melbourne lobbied heavily for the festival to reverse its decision – which was done Friday afternoon.

The Age was a media partner of the 2020 Melbourne International Comedy Festival.