On the second floor of the newly renovated Australian Centre for the Moving Image, six technicians in white lab coats and gloves are working furiously on a film project of which Christopher Nolan would be proud: they’re trying to stop time in its tracks.

They’re working to preserve more than 250,000 pieces of film, video and game content before the material on which it was created degrades or becomes unplayable.

“It takes about eight hours to convert each hour of material into digital form, so we calculate there’s about 434 years of work here for one person,” says Nick Richardson, ACMI’s head of collections and preservation. Luckily, he’s not alone. “About 72 years and we’ve got it done.” 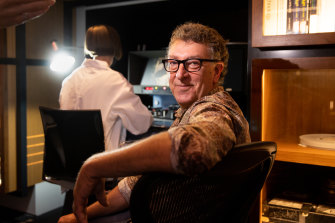 Nick Richardson and a colleague view a 16mm print from ACMI’s Collection on a Steenbeck.Credit:Simon Schluter

Well, they might if they didn’t keep getting new stuff all the time, like the 7000 computer games, dating back to the early 1990s, that turned up in 30 cardboard boxes last week. “The donor used to have the licence to provide tech support for them all,” Richardson says. “It was either give them to us or his wife was going to divorce him.”

In the new ACMI, the Blackmagic Design Digital Preservation Lab has been brought out of the basement and placed in full view of an audience, who can gaze on the team at work through display windows housing a range of old film, television and gaming memorabilia. For the technicians it might be a little like being in the orangutan enclosure at the zoo, but they aren’t likely to start throwing their faeces at the visitors any time soon.

“It’s an opportunity to show people the time, and particularly the effort, that’s involved in making this stuff available,” Richardson says. “We live in a world where YouTube is ubiquitous and we assume everything can be made instantly available. And the story of this lab is that we want to make everything available – but the effort behind that is immense.” 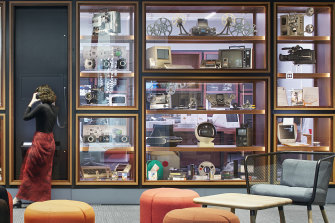 The Digital Preservation Lab is visible to visitors to ACMI through the window displays in Edie Kurzer’s Wall of Objects.Credit:Shannon McGrath

It’s not just content that’s the issue, it’s the platforms too. Richardson mentions the case of an iPad artwork bought by an Australian institution that became unavailable after an automatic upgrade of the tablet’s operating system. He points to a pile of DVDs and warns of the horrors of delamination, wherein the thin layer of film that carries the information separates from the plastic disc and crumbles. He says the museum has about 60 VHS machines, as repairing them is rapidly becoming impossible because of the advancing years of technicians and the scarcity of parts (“though we have taken to 3D printing on occasion”).

And the more advanced the technology, the greater the risk of redundancy, with the typical lifespan of an operating system about five years at best. “The irony is I could project a piece of nitrate film from the 1890s for you now, but I’ve got an interactive work from 2004 that we’ve been struggling to recreate for the past 18 months,” he says.

Converting everything to platform-neutral zeroes and ones gives it the best chance of being accessible down the line – so long as the storage medium is itself reliable. And that’s a challenge too.

“Archiving and preservation is all about migrating: nitrate film to safety film; diacetate film to triacetate film; film to videotape; film and videotape to digital. It’s just that the speed at which we have to migrate has rapidly increased. Nitrate film gave us a 100-year window, and hard drives give us a 10-year window. Now they’re looking at storage in DNA, in drops of water.”

Whatever the medium, the race against time continues.

“We are constantly juggling the value of the content versus its physical condition,” says Richardson. “We might get a collection tomorrow that is incredibly valuable and in incredibly poor condition and we’ll have to turn our attention to that. You turn your attention to this, you’re turning it away from that.

“You’re on a hiding to nothing being an archivist,” he adds. “Things will degrade before you can get to them; you just aren’t going to save everything.”

Playing for keeps: the expert guide to keeping your visual memories intact

The Australian Centre for the Moving Image reopens to the public at midday on Thursday, February 11.