‘How nice you allow a little neck tickle’: Ex BBC reporter reveals his joy after the dog he rescued from Romania – who was so traumatised she hid behind the sofa for weeks – is finally bonding with his family

An ex-BBC journalist who rescued a ‘terrified’ dog named Sophie from Romania only to discover she was so traumatised she daren’t move from behind his sofa has revealed that she’s finally begun to settle in his home.

Former technology correspondent Rory Cellan-Jones, 64, and his family adopted the pet from Romania just before Christmas – she arrived at 3am after a 72-hour van journey from the Eastern European country.

Ever since, Cellan-Jones has been documenting her story on social media, using the hashtag #sophietheromanian, including their struggle to get Sophie to settle – for weeks, she hid behind the sofa, and was too scared to wander their home, let alone go outside.

However, much to the delight of animal lovers who’ve been following her story, in recent days, Sophie has begun to relax more in her new home – thanks, Cellan-Jones says, to patience, pet psychology and scraps of sausage meat. 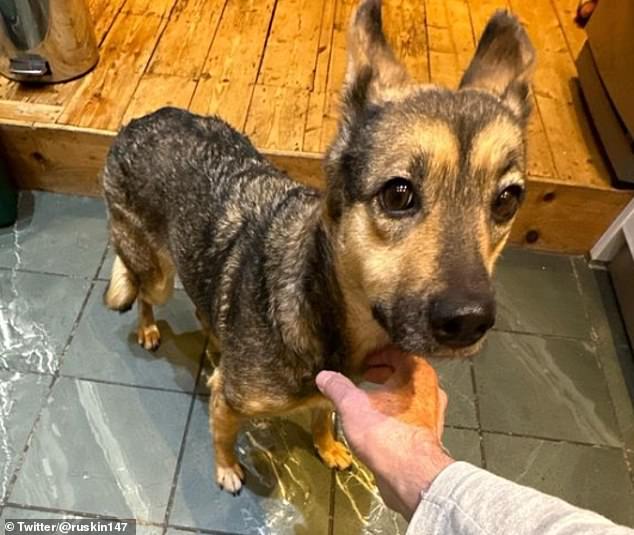 A neck tickle for Sophie: ex BBC man Rory Cellan-Jones, 64, who lives in West London with wife Diane, decided to adopt Sophie the rescue dog before Christmas – and has documented how hard it’s been getting the ‘terrified’ dog to settle…but this week revealed their patience is paying off

Earlier today, the journalist posted on Instagram that the pet felt comfortable enough in the presence of her new owners to allow a tickle under the chin – and other photos posted earlier this week revealed she’s been exploring Cellan-Jones’s frosty garden – although longer walks are still out of the question.

The newsman posted, alongside a photo, ‘Good morning #sophiefromromania how nice that you allow a little tickle under the chin.’

Shortly after the dog arrived, Cellan-Jones, who worked for the BBC for more than 40 years until he left in 2021, described how he’d been shocked by just how scared the rescue dog was upon arrival. 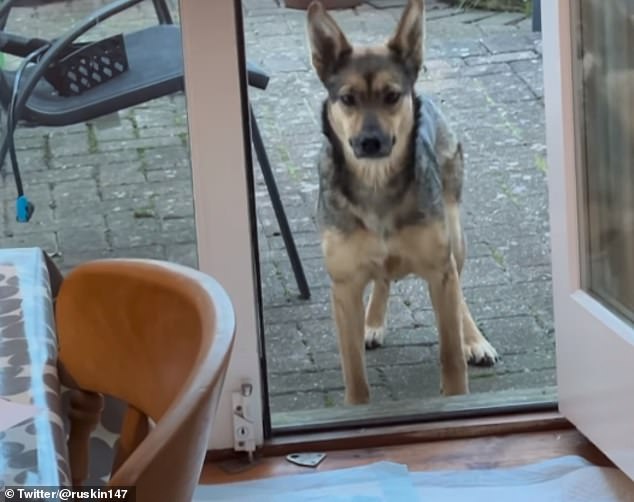 While Sophie still isn’t confident enough to venture out on a longer walk, the family say she’s begun to explore their West London garden – after weeks of hiding indoors 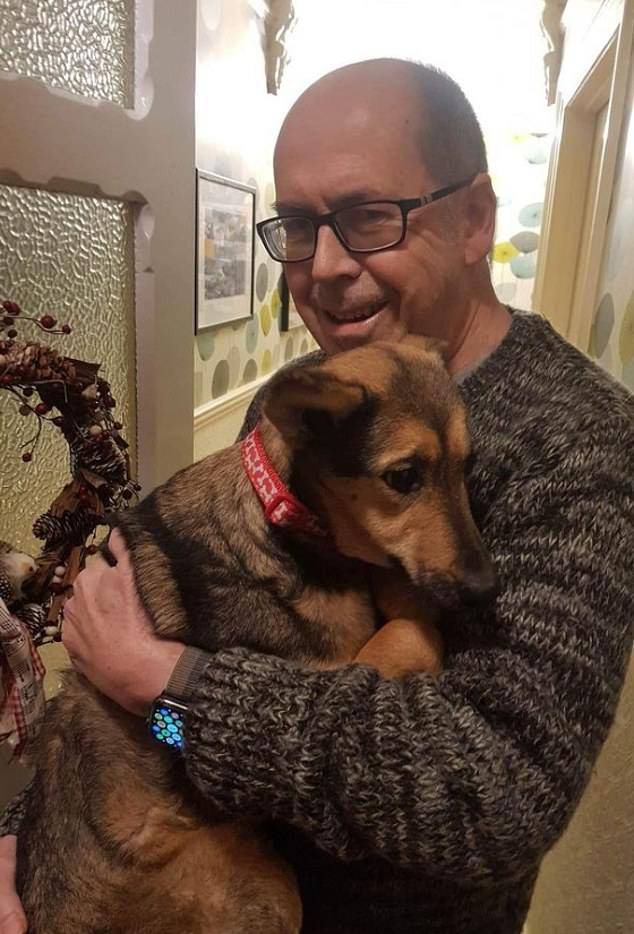 You’ve come a long way: a ‘terrified’ Sophie pictured with Rory shortly after she arrived at their West London home in December 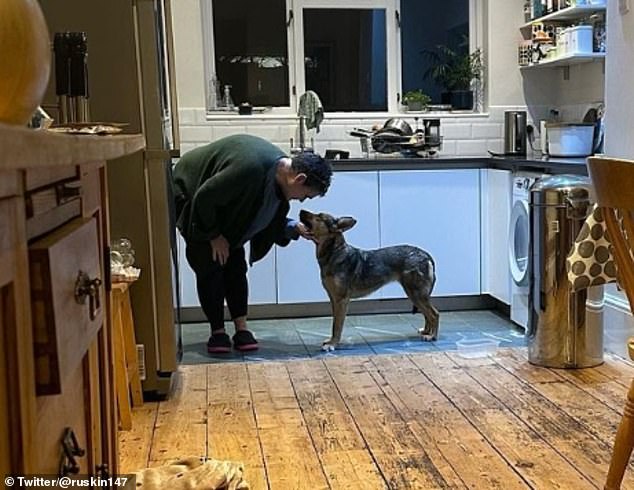 The dog has begun to bond with the journalist’s wife, Diane, with Cellan-Jones posting this photo this week, along with the caption: ‘Love this picture’

Cellan-Jones, who lives with his wife Diane in West London, told BBC News at the time: ‘She was much more frightened than we’d imagined.’

He added: ‘There is a bit of a cautionary tale here about being aware of what adopting a dog from Romania or other foreign countries means. We didn’t go into it blind, we’d seen the dog on video and she seemed to be okay.’

He said that travelling such distances had likely been a ‘pretty scary experience for her’.

He added that the family had been following a pet psychology programme to try and help her feel more at home but that it had been ‘two steps forward one step back’ – although their efforts, a month on, seem to now be paying off. 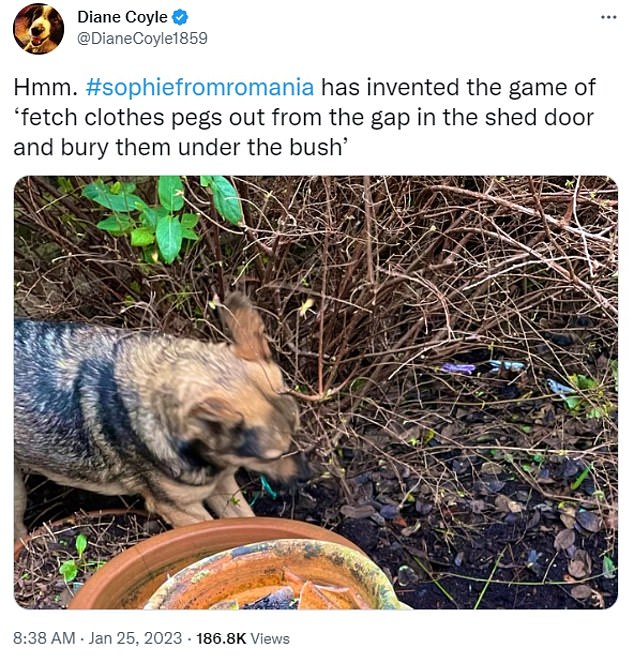 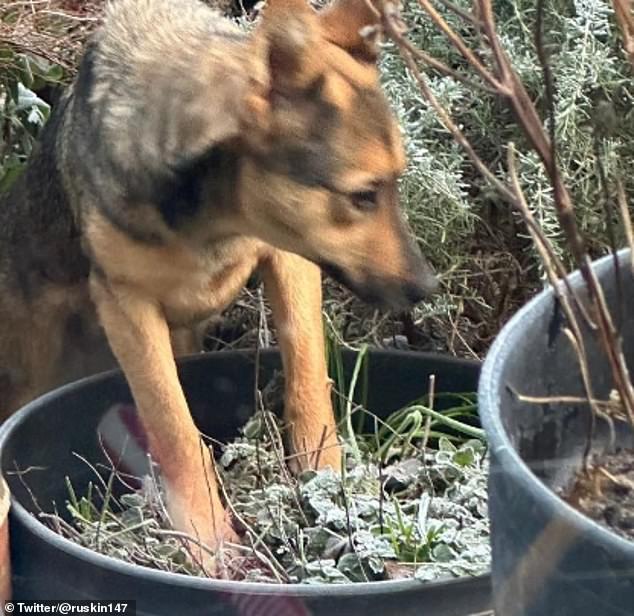 Progress: Sophie pictured pawing the frost in a plant pot in the family’s West London garden 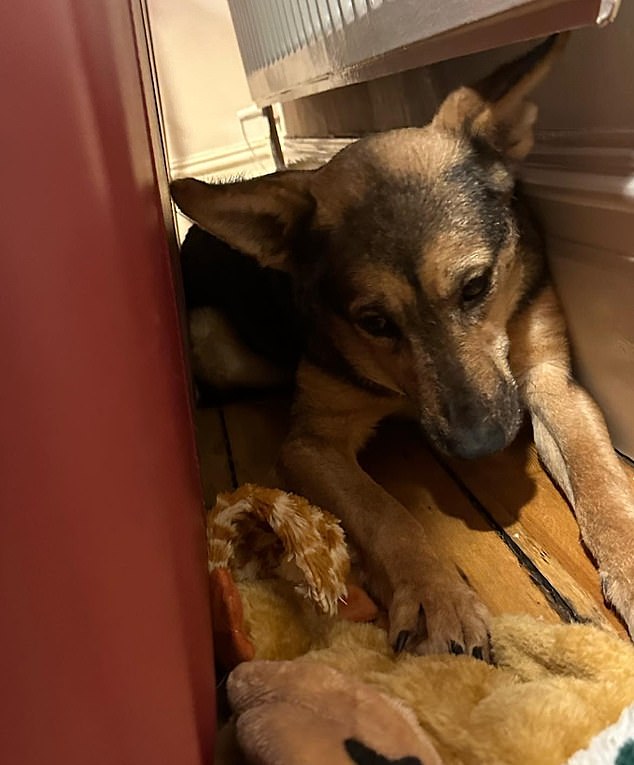 Back in December: The nervous dog barely emerged from behind the back of the family’s sofa after the 72-hour van journey from Romania

He said the family had had to learn to be ‘incredibly patient’ and urged those who were thinking of adopting a rescue dog to think carefully – but said the family had already grown fond of their new pet, and the support her story has garnered on social media.

Emma Billington, from the charity Dogs for Rescue, explained to BBC Breakfast how people adopting a rescue dog shouldn’t view them as ordinary domestic pets.

She said: ‘It takes a long time with rescue dogs. Believe they can change and the main thing is giving them the safe space. These dogs have only known trauma so they need to feel really safe.’

She said ignoring a rescue dog felt like the ‘hardest thing’ for a pet owner to do but it was often the best way not to overwhelm them.