Home » Lifestyle » Everybody is a nerd about something: Marc Fennell

Marc Fennell is one of the busiest men in journalism. He’s on our screens every weeknight hosting Mastermind, co-hosts The Feed weekly, has regular spots on Dateline and The Project, does a radio show on technology for the ABC and has produced several podcast series for Audible in the past two years. He also makes a podcast about mental health for Beyond Blue. 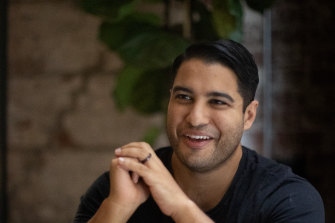 Later this year, Fennell – who is of Irish and Singaporean Indian descent – will host The School That Tried to End Racism, a three-part ABC series that explores the issue through the eyes of children aged 10 and 11. He can’t reveal muchyet but says it shares some DNA with the recently screened Old People’s Home for Four Year Olds.

“A lot of shows point out that racism is a problem; this actually charts a solution,” he says. “It’s definitely one of the most moving things I’ve experienced.”

We’ve ended up having a Breakfast With, rather than a lunch, while he is in Melbourne to film an episode of Dateline and working to a tight schedule. When I arrive at Higher Ground, a funky cafe housed in a former power station, the waitress is telling him how much she loves his work. This happens on occasion, he says; his children, Max, 6, and Sophie, 4, are inured to it.

For years when asked what their father did, the kids would say: “Daddy wears makeup for a living.”

“And I thought, well, it’s not inaccurate. When we were doing The Feed every night of the week live, it was like, yeah, it’s true, I wear more than their mum does.”

His wife is Madeleine Genner, a journalist with ABC Radio; they met at Sydney’s community station FBi Radio as teenagers. In the past, the kids would sometimes watch him on The Project, but not now. When Grace Tame appeared on the show, having been announced Australian of the Year, providing context proved tricky. “One day I’d like to tell them why she’s incredible but right now it’s a bit early.” 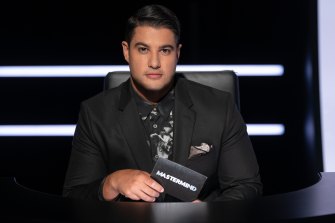 Fennell as host of Mastermind on SBS.

“Weirdly, the one thing I have done that they did pay attention to was when I filled in on Mastermind, because it’s a really easy concept. Although I did do one voice on Bluey, which for them was gold.”

We’re happy to share, so we order the spiced cauliflower scrambled eggs and the spanner crab benedict, recommended as house specialties, and coffees. In real life, the 36-year-old is as he appears on screen: warm, chatty and whipsmart.

Backtracking nearly two decades, an 18-year-old Fennell was three months into a media degree at UTS when a friend got in touch to say SBS was looking for replacements for Margaret and David on At the Movies. He auditioned, nervously racing through his three-minute script in just 30 seconds, and managed to get the gig. His initial thought was great, “but no one one will watch it – and I was right!”

He quit studying to take the position. Occasionally asked to speak at universities, he happily does so, with one disclaimer: “I may espouse the virtues of leaving.” 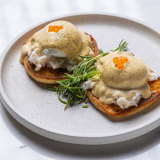 The Mastermind gig on SBS earlier this year came as a surprise, as it was so different to his previous work, which includes movie reviewing on Triple J, the Andrew Denton-led Hungry Beast, The Few Who Do, a podcast with Jan Fran, and Channel 10’s morning show. In 2020, he filled in on Insight for Jenny Brockie on occasion.

Finally, his obsession with Star Trek was vindicated. “Somewhere along the way, we’ve made the word ‘nerd’ into a negative word and actually what it has taught me is that everybody is a nerd about something. What the show is for me is people coming and loving this thing and then that is put to the test.”

To this day, it’s men who most readily put up their hands to appear on the show. When Jennifer Byrne took on the host role, she was keen to address that. Fennell concurs. He also champions cultural diversity in the media, as creative director of not-for-profit Media Diversity Australia. “The best way to do it is to look at whose voice isn’t there. That’s the least buzz-wordy way of doing it,” he says. “I want the best representative version of Australia possible and the only way we can do that is make it clear it’s a welcoming space for all.” 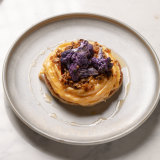 The contenders’ – in Mastermind land, it’s never contestants’ – often wacky breadth of subject matter is part of its appeal. To illustrate the point, he cites an episode which featured narrow-gauge Welsh railways, 18th-century women’s fashion and the Italian men’s soccer team. “Turns out my Welsh pronunciation needs some work,” he says with a laugh.

Having won a Walkley Award for a 7.30 report on “a guy who stole stuffed animals” and a James Beard Foundation award for the podcast It Burns in 2020, in May Fennell was shortlisted for two Walkleys. One for a Dateline program on dwarfism and for the ABC’s Stuff the British Stole. The latter is a cleverly named podcast that tackles history through the prism of the British empire.

Listening to his podcasts, he seems to have a flair for languages. Turns out he studied Italian, German and Latin at high school. “And I remember none of them. With Latin, you’d be amazed at how not useful it is on a day-to-day basis.

“Also, I just wished I’d paid a lot more attention, really. I’m not gonna lie. There’s some year 9 Latin teacher somewhere who will read this and feel so vindicated and say, ‘He did not pay attention.’ And she is correct. So Ms Starc, I’m sorry,” he deadpans. 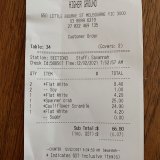 Receipt for breakfast at Higher Ground.

One of the joys of podcasting is access to worldwide audiences. While growing in Australia, Audible is biggest in the US and the UK. His series for them include It Burns, about extreme chilli growing and eating, and Nutjobs, about a series of Mafia-controlled nut heists in California. “I’m a real curiosity to Americans. When they think of Australians, they don’t think of me – they think of the Hemsworth brothers,” he says. “I’m a complete oddity to them, so they’re as curious about me as I am about them and that creates a really fertile environment to have a conversation.”

The global pandemic, of course, has affected how stories can be told, curtailing all international travel, but there are workarounds.

“It’s not impossible but it’s a much more challenged way of working. So much of what I do is about taking you somewhere: you put your earbuds in and I take you somewhere. We’ve found ways of doing it remotely and making it still feel like a visceral experience.”

He loves working in audio, he says, because it’s very intimate. “You can also leverage the audience’s own imagination.”

In order to make Stuff the British Stole, he and producer Zoe Ferguson identified tier-one talent, hiring stringers to record them and their surrounds, then pinpointed others who could self-record. Even so, it’s tricky to paint a picture of a world you haven’t seen first-hand.

Storytelling, curiosity and a genuine interest in people is what attracted Fennell to this line of work. “That’s why you become a journalist, right, to meet people and hear their stories.”