The NSW Environment Protection Authority has approved logging in forests hard hit by recent bushfires in the state's north without first assessing the toll taken on koalas and other wildlife.

In early March, the agency gave the go-ahead for state-owned Forestry Corporation to log 5062 hectares – or 18 times the size of Sydney's CBD – in 19 compartments within three state forests on the Richmond River lowlands. 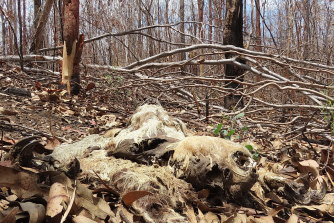 Areas such as the Banyabba region had lost half their koalas before the recent bushfire season. As many as three-quarters have been lost since. Credit:Dailan Pugh

That approval was despite the loss of as many as 90 per cent of the marsupials in burnt areas, according to environmental group, the North East Forest Alliance. About 83 per cent of the 71,000 hectares of "likely" koala habitat was burnt.

North East Forest Alliance spokesman Dailan Pugh said the EPA should first have assessed the effect of the fires on Banyabba Area of Regional Koala Significance that takes in the Bungawalbin, Doubleduke and Myrtle state forests. 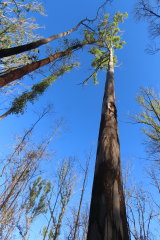 Forestry Corp says it will increase protections for koala in its logging of partially or unburnt regions.Credit:Dailan Pugh

"We need to know what the impact of the fires was," Mr Pugh said. "They have done nothing – I find that totally reprehensible – and yet they are approving the logging."

Koala numbers in the Banyabba region had already shrunk by more than half because of clearing and logging before the blazes. Now, as many as three-quarters of the survivors of what had been one of the largest colonies in north-eastern NSW had been lost. "Extinction is the process of the elimination of populations," Mr Pugh said, noting large colonies elsewhere, such as near Port Macquarie have also been burnt.

An EPA spokesman said it was working with other government agencies and Forestry Corporation "to understand the specific impacts of these fires and identify a limited number of areas" where harvesting can resume.

"The EPA has issued site-specific conditions, tailored to each site, to reduce any further impacts on soils, waterways, plants, animals and their habitats," he said.

For the three state forests, the EPA had added controls to conserve all unburnt or lightly burnt areas, protect all primary koala feed trees and double the amount of koala habitat that must be protected during logging.

Forestry Corp said it would use so-called 'song meters' to map koala occupancy as part of the government's "robust" modelling.

"These [19] areas represent a tiny fraction of the area impacted by recent fires," a spokeswoman said. "The proven protection measures will be in place throughout these operations and they will be augmented by site-specific conditions that substantially increase the area of habitat protected."

Mr Pugh, though, said the only change specifically intended to mitigate impacts on koalas was a requirement to retain temporary feed-tree clumps that would increase protections by about 7 per cent.

"This is yet another politically compromised theoretical desktop construct, to add to the already deficient requirement to retain at most five small koala-feed trees per hectare in these forests," he said. "Both these are untested, with no trials, monitoring or evaluations."

Independent NSW MP Justin Field said it was clear the state's logging rules were "no longer fit for purpose after the fires".

"There should be a moratorium on logging until a full assessment of the ecological impacts is conducted and Forestry Corporation's licence reassessed," he said.