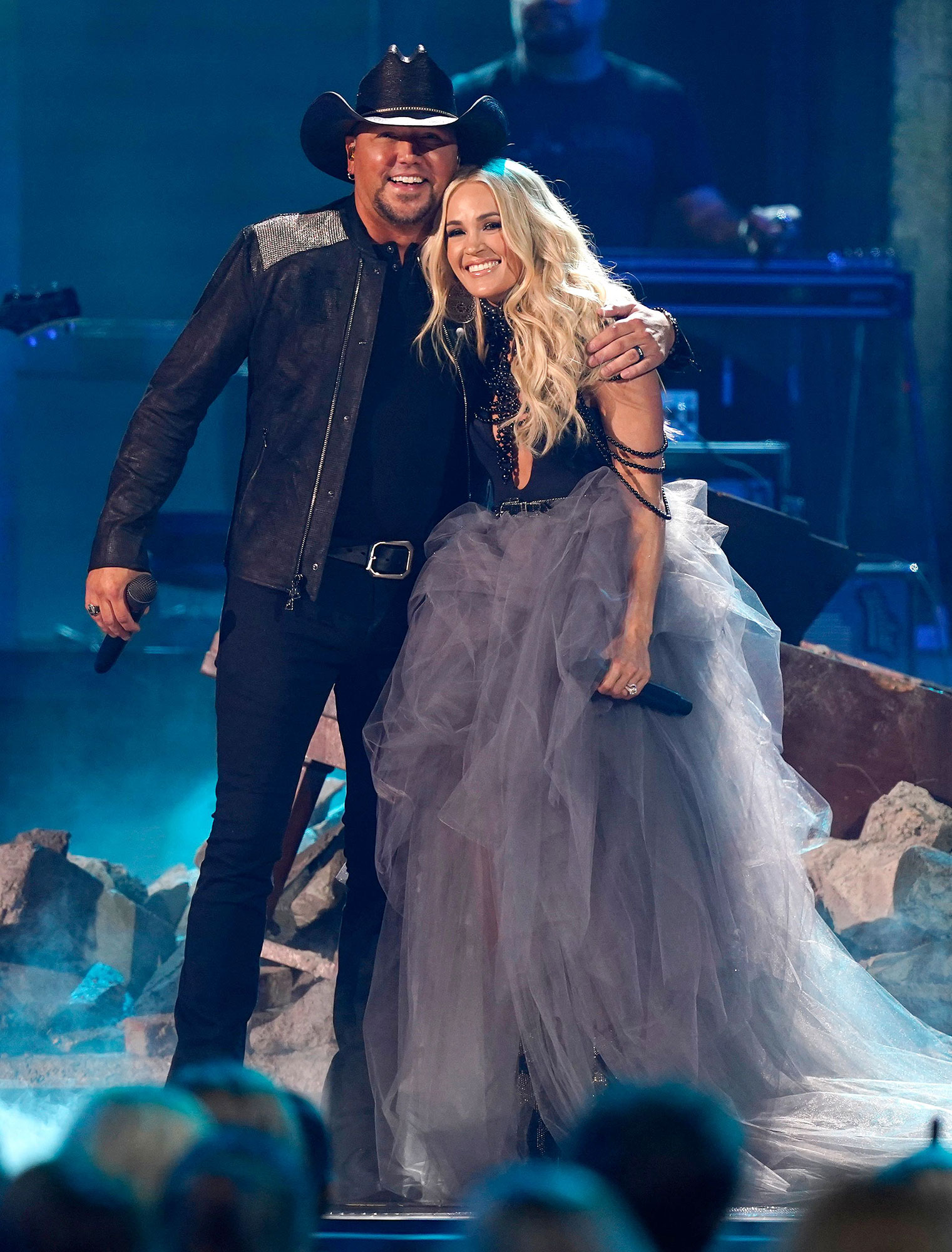 Dynamic duo! Carrie Underwood captivated the 2021 Country Music Awards stage alongside Jason Aldean for the global TV premiere of their “If I Didn’t Love You” duet.

Underwood, 38, rocked a tulle skirt for the powerful performance, while Aldean, 44, looked sleek in all black. Earlier in the evening, the “Kingdom” songstress, who attended with husband Mike Fisher, made headlines for her less than impressed face after host Luke Bryan’s “immunized” joke. (The comment came days after Fisher defended Aaron Rodgers amid his coronavirus vaccine controversy.)

The former American Idol champ previously gushed over the duo’s chart-topping performance, writing via Instagram in October, “Congrats on the country radio #1, @jasonaldean! Thank you for inviting me to be a part of this song, and thanks so much to our fans who have shown it so much love! 🎉”

The country superstars first debuted their duet in September, which was their first official joint studio single after previously singing together at various live events over the years.

“Jason asked if I would sing ‘If I Didn’t Love You’ with him,” the Calia by Carrie Underwood designer told her record label, UMG Nashville, in October. “I knew I liked the song, and Jason and I have actually been kind of trying to do things together over the years. We’ve sang together before, but we’ve never officially recorded anything together. It just kind of felt like this could be our moment. I felt like it was a little bit of an unexpected duet to other people, but I feel like I kinda always knew at some point I’d probably sing with him officially, and this just seemed like, the stars were aligning, and it just seemed like it was going to be the perfect fit.”

Everything to Know About the 2021 CMA Awards

The Oklahoma native revealed at the time that the “Big Green Tractor” crooner had started piecing together the song on his own before the pair jointly completed it.

“It definitely added to the vibe of everything to have him there when I was recording my stuff,” she added at the time. “We were able to bounce things off of each other and get feedback in real time, which is really cool.”

Aldean, for his part, similarly vocalized his excitement to work with the “Before He Cheats” songstress.

Carrie Underwood Through the Years: From ‘Idol’ to Country Star and Mom

“We were pretty close to finishing up this album, but this song came in and we knew we had to record it,” the Georgia native explained in a press release. “I went ahead and put my vocals down while we asked Carrie in the meantime. Luckily she loved the song and it was kind of like a rocket from there. She did her thing … and I don’t know how, but she made it sound even better than what we expected. It’s a really special song to start this album.”

The “Blown Away” performer is also nominated for Entertainer of the Year during the 2021 awards ceremony alongside Eric Church, Luke Combs, Miranda Lambert and Chris Stapleton. Following the awards show, the “Good Girl” singer is gearing up for a Las Vegas residency, which opens in December.

The “Dirt Road Anthem” performer recently released his 10th studio album, “Macon,” earlier this month, which features “If I Didn’t Love You.”