Home » Lifestyle » ‘Doesn’t define who I am, or what I am’: ABC news chief Justin Stevens keeps new job in perspective 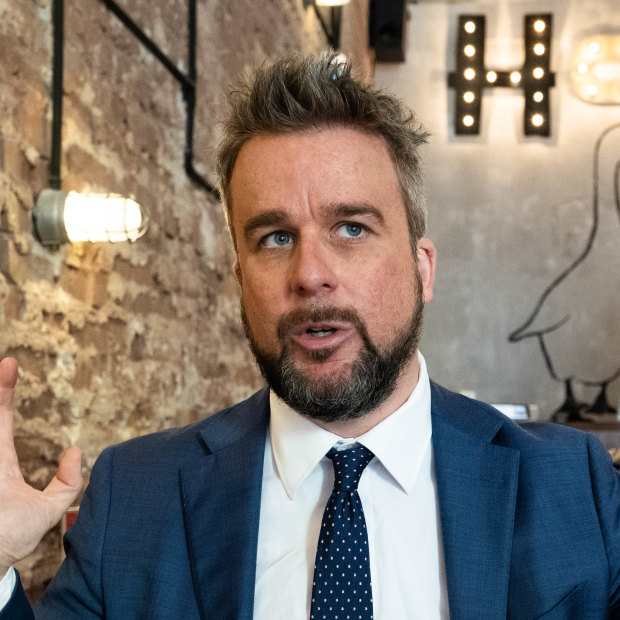 The ABC’s newly appointed news boss Justin Stevens is used to being yelled at down a phone.

When he began his career as a young producer at the national broadcaster more than 15 years ago, one of his jobs was to answer calls at the end of 7:30, under then host and mentor, Kerry O’Brien.

He learnt to take the good and the bad: too left; too right; too soft; too critical. “It was the phone log equivalent of what Twitter is today,” he says. “You would catch the viewer very fired up by the interview.” 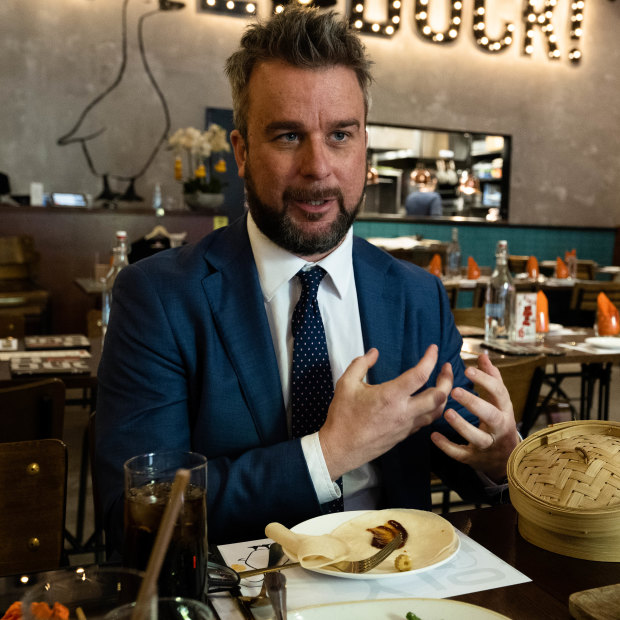 “No one should ever feel entitled to a job,” Stevens says.Credit:Janie Barrett

It was undoubtedly a useful grounding. Almost two decades later Stevens finds himself in one of the most high-profile roles in Australian journalism. The ABC is highly trusted by the public and its website attracts millions each month. As the head of ABC News, he is responsible for a team of 1200 including the broadcaster’s more outspoken reporters and presenters. He’s also a key point of contact for any political or business figure that feels wronged by the national broadcaster’s coverage.

Nearly every decision he makes will be scrutinised by staff, other media outlets, MPs, or the taxpayer, who spends about $1 billion on the ABC each year.

If Stevens is feeling the pressure, he hides it well. When he enters Holy Duck, a Chinese restaurant near ABC’s Ultimo headquarters close to Sydney’s CBD, he appears relaxed, wearing a suit and a mask (he was a close COVID-19 contact early in the week).

Holy Duck was launched by Kaisern Ching, the man responsible for bringing dumpling chain Din Tai Fung to Australia, and property developer Dr Stanley Quek, in 2016. Stevens knows his way around the menu and targets the house speciality. Duck spring rolls? Tick. Duck pancakes? Even better. He orders a coke. He says, unconvincingly, he will switch to the no-sugar version at some point. 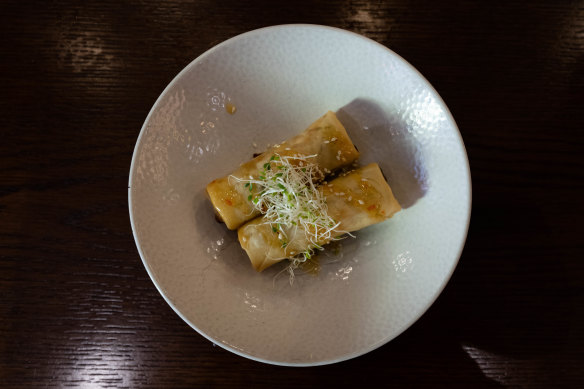 More believable is how seriously he appears to be taking his new job. Stevens wasn’t the expected choice – most people at the ABC will say that. He is young, 38, and until now, hasn’t held a senior managerial position. He leapt over interim news boss Gavin Fang and global affairs editor John Lyons to get the role. This surprised a lot of people inside the ABC, who felt others in leadership positions deserved a chance at the role before he did.

“No one should ever feel entitled to a job,” Stevens says as we wait for the entrees. “I wasn’t necessarily an expected choice, maybe it caught people by surprise. When I got it, I was genuinely honoured.”

Stevens started in journalism early. At 14, he got a week of work experience with Nine newsreader Peter Overton, who was preparing the 11am news bulletin at the time.

His father, a paediatric oncologist at Westmead Children’s Hospital and co-founder of children’s hospice Bear Cottage, had asked Overton’s father John (then a colleague) in the tea-room if it would be possible for his son to learn about news. Stevens, who says he was always fascinated by journalism, said the time Overton spent with him only solidified his interest.

After finishing school, Stevens sat in front of a TV guide marking off the programs he’d like to work on. He sent the same letter asking for an internship to 50 shows, including Gardening Australia, which politely rejected him on the basis the show was based in Tasmania. He got a bunch of unpaid jobs – Today Tonight, A Current Affair and Ten’s program Sports Tonight among them.

By the time he was 19, Stevens was at Nine (the owner of this masthead) where he spent a year before moving to the ABC.

Stevens is more focused on the conversation than the food. He’s self-deprecating at times and laughs as he makes himself more animated for the photographer. He worries about whether he should keep his glasses on. And he offers every dish to me first, so I can try it before he does.

If you want to judge Stevens, you won’t be able to do it on Twitter. Once a regular user of the social media platform, he deleted it earlier this year.

The use of social media by ABC staff has come under fire, from Coalition senators who took aim at strident tweets by high-profile journalists such as Louise Milligan, Laura Tingle and Alan Kohler. ABC managing director David Anderson introduced a new social media policy last year with tougher guidelines about what was acceptable online. The ABC said in March that 16 matters related to use of social media were escalated to its people and culture department since last August – only four staff members received discipline for their conduct. 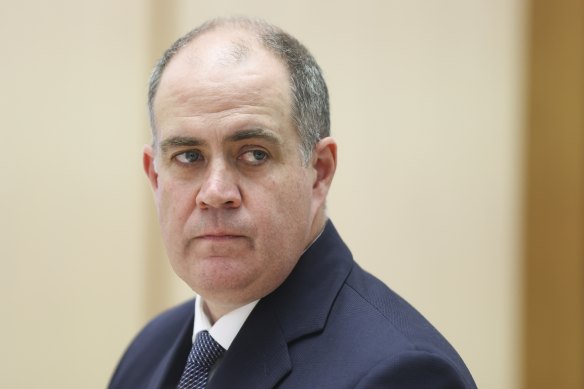 In 2021, the ABC paid Milligan’s personal legal costs of almost $200,000 after she was sued by federal MP Andrew Laming over four since-deleted tweets, including one that incorrectly suggested he had admitted to the criminal offence of taking an “upskirting” photo of a woman’s underwear.

Stevens was prolific in his own way, often responding to viewer feedback and marking off which ministers refused to come on 7:30 in what some have described as a belligerent manner.

He isn’t the only high-profile person to delete his account – former 7:30 presenter Leigh Sales and breakfast host Lisa Millar are among an increasing number of ABC staff to remove themselves from the website after becoming the subject of violent and sexist abuse.

“I’m not saying I hate or dislike Twitter,” he says. “I think there is an aspect of it which is useful, but the discourse has descended such that it is less positive and constructive, and therefore less constructive or useful to journalists. Secondly, the taxpayer is not paying me to spend my day on Twitter. 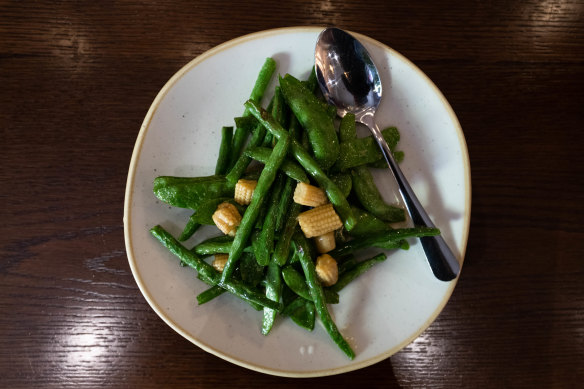 “I suppose I saw an opportunity to say to my colleagues and journalists that I don’t see much value in being on Twitter, I don’t see that it improves our journalism very much.”

Stevens knows his detractors will argue his decision to delete social media meant he couldn’t face criticism. And one of the biggest criticisms of the ABC is that it is biased one way or another. It’s not just governments complaining.

The Murdoch-owned Fox News, the Australia/Israel Jewish Affairs Council, former prime minister Malcolm Turnbull and former Labor political advisor Milton Cockburn have all accused the ABC of bias, unfairness or breaches of editorial standards in the past year (Murdoch’s News Corp competes against the ABC in many areas). This has put immense pressure on a division that the public relies on as a trusted source of information.

When Stevens reflects on these accusations, he focuses mostly on the allegations of political favouritism.

“In regards to perceptions of bias at the ABC, I think we have to accept people who don’t work at the ABC have accused the ABC being biased for a number of years. Governments of all persuasions at some point in their tenure come to a view that the ABC is being too harsh in their analysis or coverage.

”People have accused the ABC of being too Labor biased during Coalition government and then if you log onto Twitter you’ll find that there’s a conspiracy that … we’ve drunk the Coalition cool-aid.

One program which required an external review was a documentary called EXPOSED: The Ghost Train fire, which looked closely at the Luna Park incident that killed six children and one adult. It was reviewed externally because it made allegations connecting former NSW premier Neville Wran to Kings Cross criminal Abe Saffron (Turnbull and Wran are former business partners) and became a catalyst for a review of the ABC’s complaints system, which will now be overseen by an independent ombudsman, Fiona Cameron.

“I wasn’t directly privy to the Ghost Train, but [it] was subjected to a complaint and was dealt with comprehensively by the internal complaints department and that found that the Ghost Train series was accurate,” Stevens says.

Stevens was raised on Sydney’s north shore, the youngest of four children. He’s the husband of Sarah, and father to Matilda, Harry and a border-collie. He’s also a rugby union tragic, a role which he says has been thankless in recent years as the Wallabies haven’t won a lot (though he says coach David Rennie is doing a good job).

We get distracted briefly by our main dish – the duck pancakes – which require a skilled hand to pull the various bits together. Stevens asks if I’d like to cut the duck – I tell him I shouldn’t be trusted with a knife, and we leave it to the waiter. 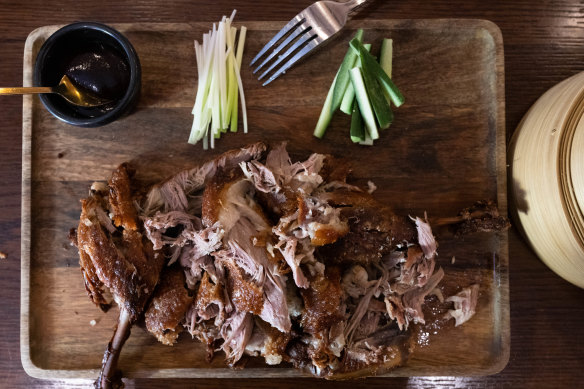 As we eat, Stevens speaks fondly and with gratefulness about his childhood, his education at St Ignatius College in Lane Cove and smiles when he mentions his parents and the weekends he spent handing out flyers for Bear Cottage with his siblings.

But when Stevens speaks about his immediate family his smile waivers. He apologises for the tears in his eyes. His personal life is complicated.

Several years ago Harry, then three-years-old, was diagnosed with leukaemia. Harry was in remission briefly before the cancer came back a second time last August. Stevens was given four months off to sit by Harry’s side as he went through treatment. Stevens says he feels like he entered a parallel universe. He navigated Harry’s most recent treatment during the 2021 COVID-19 lockdown, often FaceTiming his wife and daughter from the carpark of the hospital at Westmead.

“My job is just a job that doesn’t define who I am, or what I am,” he says. “I take my lead from him because he is incredibly tough, brave and he’s had it twice and he hasn’t complained once.”

Harry has returned to school and is improving, which has given Stevens time to settle into his new role. But already, there’s been plenty of difficult decisions. He has had to appoint two new executive producers – one to replace him and another to replace long-standing Four Corners executive producer, Sally Neighbour. He also named Sarah Ferguson to replace Leigh Sales, who stepped down from her role as 7:30, and is in the process of revamping another flagship program, Q&A, under permanent host Stan Grant. 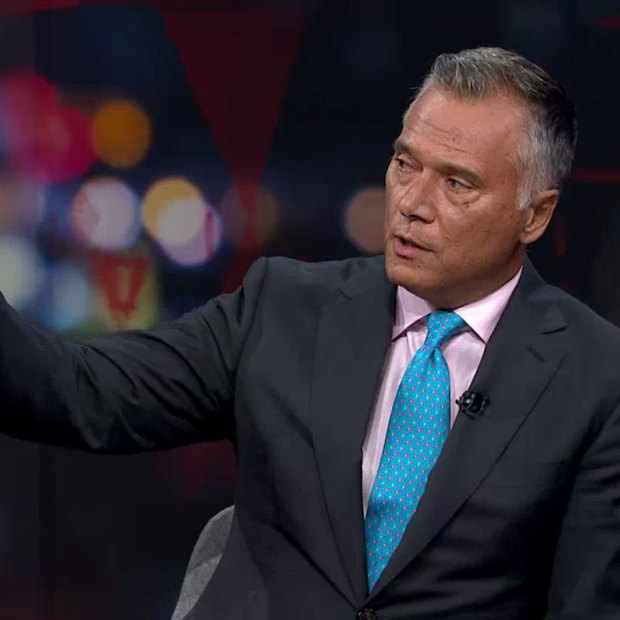 A permanent Q&A host: One of Stevens’ decisions in his new role.Credit:ABC

The shift of audiences from traditional radio and TV to digital platforms are challenging enough. But Stevens also has to deal with a new government, a move to Parramatta and a new ombudsman to oversee editorial complaints.

Stevens is moving swiftly to put his stamp on things. A recent project led by an internal advisory cited accounts from Indigenous and culturally diverse employees of racism and cultural insensitivity while working in the news division. Stevens — not in charge of the division during the period covered by the project – issued a long apology.

“I felt it really important early in my tenure to acknowledge the fact that this work was being done … but secondly, to send a message in terms of my leadership of the news division, that I’m not going to tolerate racism or bigotry in the workplace,” he says. “It’s everywhere in Australia, it’s not confined to the newsroom, it’s in every workplace.

“I won’t second guess what anyone would have felt with that, I think there would have been a mixture of feelings. Actions speak louder than words. I’ll be judged by what happens in the next six to 12 months.”

He’s right. Everyone will be watching.