Home » Lifestyle » Diet pills, serial killers and playing with fire: This was real life in the 1980s

Whenever I speak to someone who came of age in the 1980s like I did, we inevitably let out the sort of stunned giggles of someone who sees a boat on fire and hopes it might just be a stunt.

“Right?” we’ll say, before we go on to dish about shared childhood experiences that could happily keep a therapist in designer jeans for years. 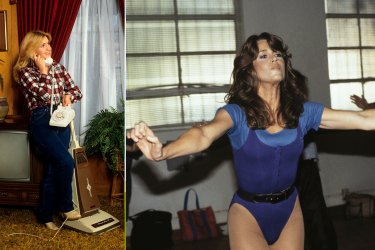 Back to the 80s: the era that meant waiting for your parents to get off the phone in order to speak to your friends, and a perennial fear of gaining weight, thanks to workout videos by Jane Fonda, right.Credit:Getty

No, the wistful nostalgia for the 80s lately whipped up by the likes of Stranger Things, Top Gun: Maverick and the news that Selena Gomez will star in a remake of 1988 hit Working Girl is not shared by us. Instead, crunchy waterfall fringes and aggressively colourful nylon windbreakers – now for sale again thanks to a Quicksilver collaboration with Stranger Things – recall a shitshow of an era marked by cultural obsessions that were about as helpful for our minds as wristbands were for our tennis prowess.

“Now, I have a gorgeous mother, we’re very close, but obviously you go, ‘Oh my god, why the f–k would you do that?’” says one woman I know. Now in her late 40s, she was in her pre-teen years when her mother took her to see a dietician.

This is a move ripped straight out of the 1980s parenting handbook. Because if your parents weren’t worried about how your waistline looked in Flashdance leotards, they were obsessing about theirs. 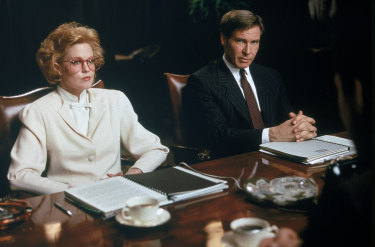 Return of the pantsuit: Selena Gomez has just announced she will star in a remake of the 1988 hit comedy Working Girl, pictured, starring Melanie Griffith and Harrison Ford. Credit:Getty

So often were diets mentioned in my house, in Toronto, Canada, that when I was seven, I crafted a ceramic sculpture for my mother in the shape of a fridge that bore the words: “THINK THIN”. For a birthday gift. She received this not as an insult, but instead as loving encouragement.

It’s a testament to just how entrenched this mindset was, that one of the last things my mother said to her nurse on her deathbed, as I walked into her hospital room, was: “See? I told you I had slim children.” She was 76. 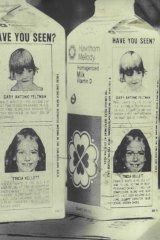 “It just felt like there were more predators then,” says a friend who remembers drinking from milk cartons, like these pictured, which showed the faces of children who had recently gone missing and were widely distributed throughout the 1980s.Credit: AP/Laserphoto

Who can blame her? Richard Simmons workout videos and ads for low-fat yoghurt played on TV around the clock in the 1980s.

Or, I should say more accurately, they were seen by those of us still lucky enough to have our eyesight.

“Teachers and adults didn’t really care that much [about safety then],” says one friend I know. Now in his late 40s, he recalls regularly playing “fireball” with friends on his local oval and experimenting with fireworks as a teen in the 1980s.

Fireball involved dousing hessian bags in kerosene tied up in string and kicking it around an oval in lieu of a football. “The bag opened up on top of this guy’s face, and all his facial hair was singed,” he says of one session involving a fellow 14-year-old. That kid lost his eyebrows.

As for fireworks? “Friends would swap them at school and some kids would just take all the gunpowder out of the firecrackers and put them in a big pile on the ground in the garage and light them,” says my friend. “Just to see what would happen when you’d light it.”

It went about as well as you’d expect for a time when nylon windbreakers were not only popular, but highly flammable. “It blew up in their face,” he recalls of one kid in his town.

You know what else was big? Talking about serial killers around the kitchen table.

“It just felt like there were more predators then,” says a close friend, now 45, who grew up in Canada. “Like the milk boxes and stuff.”

Every time we’d open our fridge door we’d see the back of a milk carton featuring whichever kid had most recently gone missing. “I remember always having to walk to, like, the shops or a phone booth and find a quarter to call my mom and say ‘Come get me, some creepy guy’s walking behind me’.”

Perhaps this is why our parents weren’t so concerned with our feelings. They had more pressing things to worry about. 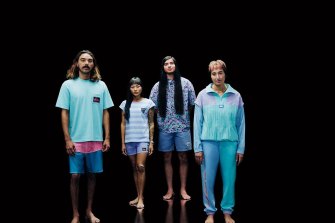 “The 80s were like an epileptic fit waiting to happen in f–king neon,” says one friend of the bright clothing she wore as a teen in the 1980s, now being brought back by the likes of Quicksilver, pictured.Credit:Quicksilver

“I remember your mom saying, ‘As long as they ate, went to school and weren’t sexually abused, OK’,” says a friend of my late mother’s. It’s an understandable mindset for parents raising kids, as mine did, when we all regularly drank out of those aforementioned milk cartons – a common tactic used, at the time, to help find those missing kids – and coverage of the execution of serial killers like Ted Bundy was televised live. I remember watching people on TV outside Bundy’s Florida prison yelling “burn, Bundy, burn” in 1989 as he was being killed, and my grandparents sat in the next room.

But while the return of banana clips, windbreakers and Kate Bush songs may not elicit warm and fuzzy feelings for me, I’m no different from those for whom it does. Because for me, it’s the 1960s and 1970s that make me swoon. The British Invasion, flared denim and peter pan collars in psychedelic swirls: they’re it for me. I imagine those who lived in those eras though see it quite differently. (Thanks to unequal rights for women, crime waves and a global economic crisis.)

Ultimately, I think, it comes down to something we all crave, no matter when we grew up: escape. What did American author Carson McCullers once say? “We are homesick most for the places we have never known.”

Make the most of your health, relationships, fitness and nutrition with our Live Well newsletter. Get it in your inbox every Monday.