The nation’s top military officer told first-year cadets not to make themselves “prey” to sexual predators while being out late at night “alone” and “attractive”.

General Angus Campbell told the new recruits at the Australian Defence Force Academy in Canberra to protect themselves by avoiding the attention of would-be predators. 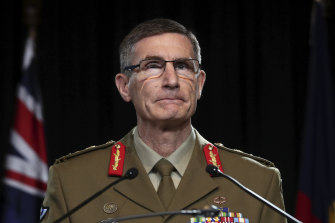 Chief of the Defence Force General Angus Campbell has been criticised for comments to young military recruits.Credit:Alex Ellinghausen

The nation’s top military officer said the cadets needed to not fall victim to the “Four A’s”: alcohol, out after midnight, alone and attractive.

The comments, first reported by The Canberra Times, have been criticised by groups supporting victims of sexual violence, which have described the remarks as outdated and victim blaming.

“In his recent address to the new cohort of ADFA trainee officers, the CDF noted matters in the media regarding allegations of sexual harassment and assault,” Defence said.

“In his view, being aware of the four As – young, attractive people, noting the entire class fell into this risk factor; alcohol; after midnight; and alone – enabled the group to recognise and mitigate the threat posed by abusive or predatory individuals.”

General Campbell’s comments were made to all ADFA trainees and did not single out females.

“This sort of message takes us straight back into the depths of victims blaming, which is the most insidious impact of sexual assault,” she told the Canberra Times. “I think it sends a really scary message top any group of people or young young people, because it flies in the face of the myths that we’ve worked against for decades.”

The ADF has been subject of numerous high-profile cases of sexual assault and misconduct over the past decade, including the secret broadcasting of footage of a cadet having sex with another cadet without her knowledge in 2011.

The Royal Commission into Institutional Responses to Child Sexual Abuse heard teenage ADF recruits were subjected to horrific sex acts and a pattern of intimidation that allegedly caused one to suicide.

Former Chief of Army David Morrison was awarded the 2016 Australian of the Year award after telling his members who degrade women, “We don’t want you”.