A deal on the treatment of gay and lesbian school students could clear the way for Prime Minister Scott Morrison to get his Religious Discrimination Act through the House of Representatives this week, overcoming Labor objections to his signature bill.

The deal has gained support from some Liberal MPs to vote for the Religious Discrimination Act if it is put to a vote in the lower house, despite earlier reservations about the impact of the draft law on the LGBTQI community. 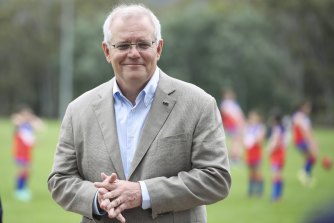 A deal on the treatment of gay and lesbian school students could clear the way for Scott Morrison to get his Religious Discrimination Act through the House of Representatives this week.Credit:Alex Ellinghausen

If they back the religious freedom bill, Mr Morrison and his senior colleagues appear willing to remove a highly contested section of the Sex Discrimination Act that gives religious schools the authority to expel or suspend students because of their sexuality.

But the offer may not be enough to guarantee the numbers in the lower house for the Religious Discrimination Act, with three moderate Liberal MPs said to be holding out against rushing the law this week while it is meant to be reviewed by an inquiry over summer.

Liberal MP Warren Entsch, one of the backbenchers who helped legislate marriage equality in 2017, is said to have significant concerns about passing the Religious Discrimination Act this week but is yet to declare his position in public.

“You’ll see if and when it comes up,” Mr Entsch said. “I’ve got a very strong position but I’m not going to do a running commentary.”