Don’t get too used to the mild, sunny and dry end to winter and start to spring because it probably won’t last long.

The Bureau of Meteorology’s long-range outlook for spring is for above-average rainfall for most of southern and eastern Australia. The extra cloud will probably make the nights less chilly but keep a lid on daytime temperatures. 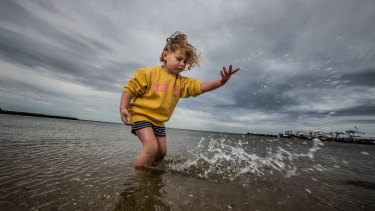 Flora Weiss, 4, enjoys the water in Port Melbourne on the last day of winter. Credit:Jason South

Melbourne’s near-term outlook, though, includes some warmth that will tempt people outside. Thursday’s forecast top of 26 degrees would make it the warmest day in the city since early May.

“It’s certainly a lot wetter than we had back in 2017-19 when much of eastern and southern Australia was very dry [going into spring]” Andrew Watkins, head of the Bureau’s Operational Climate Services, said.

“The main thing we’re watching is we have high rivers and full catchments,” he said, adding Victoria’s wetter-than-average prediction for spring extends over most of the state. 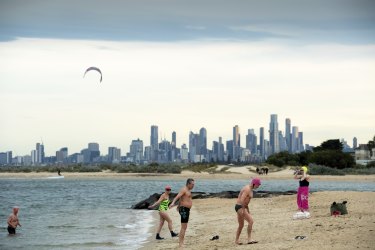 The last day of winter didn’t deter these swimmers at Brighton Beach.Credit:Penny Stephens

Eastern Victoria is “fairly wet at the moment”, which brings with it reduced bushfire risk for later in the season but also elevated flood risk for now, Dr Watkins said.

Melbourne’s winter would likely come in as its warmest for maximum temperatures since 2014, Ben Domensino, a senior Weatherzone meteorologist, said.

The city collected about 125 millimetres of rain, about 20 millimetres less than the long-run norm for winter, he said.

Despite the expected wetter-than-usual spring, the odds favour parts of coastal Victoria having a warmer-than-average season, the Bureau predicted.

“It could be warmer (than average) south of the Divide,” Dr Watkins said. Tasmania and the Top End should also have a relatively warm spring.

Conditions favouring the damper-than-usual spring include relatively warm waters off north-west Western Australia and relatively cool central Pacific that is leaning towards a La Nina event, the Bureau said.

The so-called Indian Ocean Dipole (IOD), which tracks temperature differences between the west and east of the ocean, has been firmly in the negative phase for some weeks.

A majority of the five climate models surveyed by the Bureau predict that negative IOD phase will persist into November, increasing the chance of above-average winter–spring rainfall for much of southern and eastern Australia.

La Nina-like conditions in the Pacific tend to increase the likelihood of a relatively damp and cool Australian summer, including for Victoria. 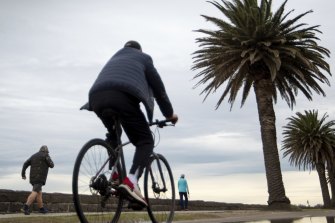 Mind the puddle: people out along Beach Road in Albert Park enjoy the last day of winter.Credit:Penny Stephens

The Bureau will provide its detailed summaries of winter on Wednesday.

Australia posted its fourth-warmest July on record in data going back to 1910. Mean temperatures that average out maximum and minimums came in 1.77 degrees warmer than the 1961–1990 yardstick used by the Bureau.