Home » Lifestyle » ‘Creeping assumptions’: Daniel Andrews was in the dark with his ministers

Premier Daniel Andrews said his embattled Health Minister Jenny Mikakos was accountable for the state’s disastrous hotel quarantine program as he offered an unreserved apology for its role in the second wave of the COVID-19 pandemic.

But Mr Andrews told the official inquiry into the ill-fated hotels program on Friday he had no knowledge of how private security had been put in charge of guarding people. He said it was "disappointing" that the decision appeared to have been what counsel assisting the inquiry Rachel Ellyard described as a "creeping assumption that formed amongst a group", that nobody was prepared to take responsibility for. 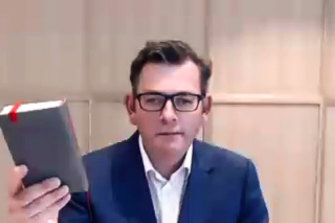 Daniel Andrews taking the oath at the hotel quarantine inquiry.

He also said he did not believe that assistance from Australian Defence Force personnel was offered early in the program and if he had known the Commonwealth had made subsequent offers of ADF help, he might have made different decisions.

Mr Andrews’ much-anticipated appearance before the inquiry brought 25 days of public hearings to a close but left key questions unanswered, with the Premier saying he was kept in the dark about a number of decisions made when the program was set up.

Mr Andrews said he left the National Cabinet meeting on March 27, where the national policy of mandatory quarantine was decided, with a "good faith" belief that troops were being offered by the Commonwealth to guard hotels in other states but not in Victoria.

He said he believed that any ADF support "would be provided where necessary and according to need”, and that "I understood that NSW was seen as having the greater need at that time".

He went on to tell the inquiry that he would have appreciated being informed about an April 8 offer from the Federal Department of Prime Minister and Cabinet boss Phil Gaetjens to Victoria's top bureaucrat, Chris Eccles, of ADF help for security at the hotels.

“I certainly would have wanted to know because it would have presented us with options that we otherwise didn't have,” Mr Andrews told Ms Ellyard.

The inquiry had previously heard from Mr Eccles who said he could not recall whether he had passed on the offer from Mr Gaetjens.

The existence or otherwise of an offer of military help in the early days of the program has been the subject of months of ferocious political attacks on Mr Andrews, who insisted to Parliament in August, and a number of times since, that he was not aware when the program was set up that military assistance was available.

The Premier became the 12th witness to tell the inquiry that they did not know who was responsible for the other most contentious decision in the scandal, the choice of private security instead of police or the military, to guard returned travellers as they underwent mandatory isolation. 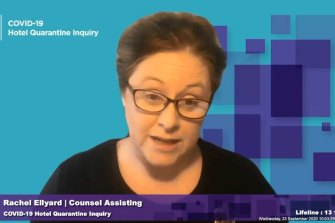 Mr Andrews told Ms Ellyard that he had found answers "not easy" to find among his ministers, senior public servants and police and emergency services commanders, prompting him to set up the $3 million inquiry headed by retired judge Jennifer Coate.

“That's why I set up this board of inquiry … to get exactly that answer and quite a few others,” Mr Andrews said.

Instead of an individual decision to hire private security, Mr Andrews said it looked like a "series of assumptions" had been made by the senior planners of the program and it was "concerning" and "disappointing" that a collective decision had been made by a group of officials but none of them saw themselves as responsible.

The Premier wrote in his witness statement to the inquiry that at the start of the hotels initiative, he regarded Ms Mikakos and Jobs Minister Martin Pakula as responsible for informing Cabinet about the hotels program.

"I then regarded Minister Mikakos as accountable for the program," the Premier wrote in his statement. "The Crisis Council of Cabinet was provided with regular reports by Minister Mikakos." 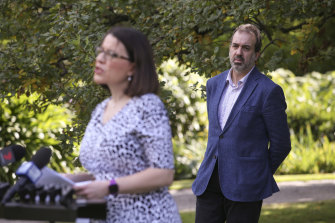 The Premier's statement said that on July 8, once problems with the hotels program had become clear, responsibility was shifted to the Justice Department. More than 18,000 people have been infected with COVID-19, and more than 750 have died, with the vast bulk of the cases traceable back to breakouts from the botched hotel quarantine system.

Ms Mikakos was forced to make an additional statement to the hotel quarantine inquiry on Friday afternoon, the day after she gave evidence, insisting she had no personal knowledge that private security were guarding hotels, even though she appeared in a press conference on March 29 alongside Jobs Minister Martin Pakula where he spoke about it.

"At the time of giving evidence to the Board, both by my First Statement and in person on 24 September 2020, I had (and at the time of swearing this supplementary statement, have) no independent recollection of the matters raised in the media today," the Health Minister wrote.

Ms Mikakos said on oath on Thursday that she had first learnt in late May that private security had been contracted to guard returned travellers.

Mr Andrews told the inquiry that, while he believed Ms Mikakos was in control of the hotel quarantine program, he said he ultimately took responsibility for its failings. He went on to apologise to every Victorian for the disastrous consequences.

“Mistakes have been made in this program and answers were required,” Mr Andrews told Justice Coate in a closing statement to his evidence. “Those mistakes are unacceptable to me".

“I want to make it very clear to each and every member of the Victorian community that I am sorry for what has occurred here and I want to issue an unreserved apology to all Victorians.”

Opposition Leader Michael O’Brien was in no mood for forgiveness after the day’s evidence, with the Victorian Liberal Leader repeating his demands for the resignations of both Mr Andrews and Ms Mikakos.

Mr O'Brien described the mismanagement of the hotels scheme as the "biggest failure of public administration in the state's history”.

"Over 750 Victorians have lost their lives [and] those grieving families deserve the truth, they deserve answers – they got none of it," Mr O'Brien said. "Instead they got lies, and cover ups and spin. They deserve better.”