Climate change will cost Australia’s economy hundreds of billions of dollars in coming decades, driven by loss of life and physical damage caused by heatwaves, droughts, floods, fires and other natural disasters, according to the United Nation’s report compiled by the world’s climate scientists.

The Intergovernmental Panel on Climate Change (IPCC) report on the impacts of climate change makes “conservative estimates” for the economic cost of global warming. It said 1 degree warming would cause a loss of 0.3 per cent of GDP a year, 2 degrees would cost 0.6 per cent of growth a year and 3 degrees would decrease growth by 1.1 per cent a year. 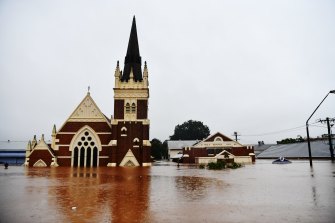 Lismore in northern NSW is being hit with the worst flood ever recorded.Credit:Elise Derwin

The world has already heated by 1.1 degrees and Australia’s land mass has warmed by an average of 1.4 degrees since 1910, according to the CSIRO.

The IPCC said there is a “very high level of confidence” that current international emissions reduction commitments would not limit warming to less than 2 degrees. If the rest of the world followed Australia’s current commitments and policies, global warming would exceed 3 degrees, according to Climate Action Tracker.

Unprecedented floods are sweeping down the North Coast of NSW, after Brisbane was inundated last week, just two years after the most intense drought on record in many parts of the eastern seaboard.

General manager of natural disaster consultancy Risk Frontiers, Andrew Gissing, said Lismore was exceeding record flood heights set in 1974 and 1954 by a significant margin, with forecast peaks that have an annual average chance of about 0.2 per cent of occurring.

Even if the earth’s heating is kept at under 2 degrees, the number of heatwave-related deaths in Sydney, Melbourne and Brisbane will more than double to an average of 300 year by 2080, under current population growth. This scenario would also see the mercury top 50 degrees in extreme events in these cities, and the frequency of days topping 35 degrees will rise between 25 per cent and 85 per cent depending on the location around the country.

Agriculture across the country is expected to suffer major financial stress as the atmosphere heats, although financial impacts are hard to forecast due to shifting growing zones, adaptive livestock and plant breeding, and advances in drought adaptation.

The Murray Darling Basin is home to 2.4 million people and agricultural production is worth an annual average of $2.6 billion. The river system is already struggling with over-extraction for irrigation and the report highlighted findings from the CSIRO that 2 degrees of warming would reduce streamflows by 20 per cent.

“The scientific evidence is unequivocal: climate change is a threat to human wellbeing and the health of the planet said Hans-Otto Pörtner, a scientist on the IPCC working group of scientists, as the Climate Change 2022: Impacts, Adaptation and Vulnerability report was released on Tuesday.

“Any further delay in concerted global action will miss a brief and rapidly closing window to secure a liveable future.”

United Nations Secretary General Antonio Guterres reiterated his plea for the world to reverse the current trend and cut greenhouse emissions in a last-ditch hope of limiting global temperature rise to 1.5 degrees.

“Science tells us that will require the world to cut emissions by 45 per cent by 2030 and achieve net zero emissions by 2050,” he said. “But according to current commitments, global emissions are set to increase almost 14 per cent over the current decade.

1. Loss and degradation of coral reefs and associated biodiversity and ecosystem service values in Australia due to ocean warming and marine heatwaves (very high confidence).

2. Loss of alpine biodiversity in Australia due to less snow (high confidence).

4. Loss of kelp forests in southern Australia and south-east New Zealand due to ocean warming, marine heatwaves and overgrazing by climate-driven range extensions of herbivore fish and urchins (high confidence).

5. Loss of natural and human systems in low-lying coastal areas due to sea-level rise (high confidence).

6. Disruption and decline in agricultural production and increased stress in rural communities in south-western, southern and eastern mainland Australia due to hotter and drier conditions (high confidence).

7. Increase in heat-related mortality and morbidity for people and wildlife in Australia due to heatwaves (high confidence).