Home » Lifestyle » Cinemas holding out for a hero this Boxing Day

Never have cinema operators needed a superhero as much as this Christmas.

After all sorts of dramas during the pandemic – extended closures, restrictions on reopening, a shortage of Hollywood movies and another COVID scare in Sydney – they are hoping that Wonder Woman: 1984 can deliver at least a partial box office revival on Boxing Day. 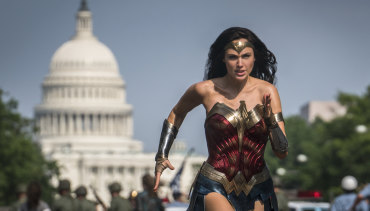 With the family comedy Peter Rabbit 2: The Runaway joining all the high-profile releases that have been postponed until well into next year, what is traditionally the biggest day of the year for cinemas has only two mainstream movies opening.

And in the animated sequel The Croods: A New Age, the prehistoric family (voiced by Nicolas Cage, Catherine Keener and Emma Stone) stumbles on a more evolved family with their own teenage daughter (Kelly Marie Tran).

Boxing Day is also the start of an unorthodox preview season for the acclaimed Frances McDormand on-the-road drama Nomadland ahead of an delayed release during Hollywood's awards season next March. 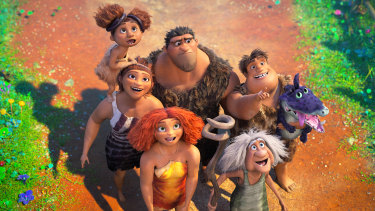 Out on Boxing Day: The Croods: A New Age.Credit:Universal

Also opening in various art-house cinemas are the American romantic drama Sylvie’s Love (simultaneously out on streaming service Prime Video), French comedy How to Be a Good Wife, documentary Ottolenghi and the Cakes of Versailles, Argentinian gay romance End of the Century, American black comedy Promising Young Woman and American espionage drama A Call To Spy.

The chief executive of Hoyts cinemas, Damian Keogh, said he was "a little bit optimistic" about the Wonder Woman and Croods sequels.

But he expected Boxing Day ticket sales to be only about 40 per cent of last year's $6.5 million, when Star Wars: The Rise Of Skywalker and Jumanji: The Next Level dominated ticket sales.

"You'd probably normally say there'd be three or four big releases on Boxing Day," he said. "So we'll be relying a lot on those [two] to carry us." 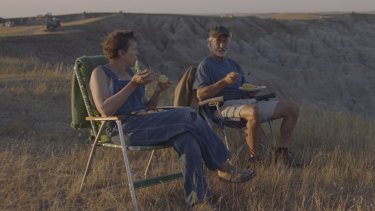 At least Australian cinemas will not have the same competition for viewers as their American counterparts, with Wonder Woman the first of the Warner Bros movies that are getting a simultaneous release on streaming service HBO Max.

With the virus outbreak on Sydney's northern beaches affecting industry expectations yet again, Keogh said seating capacities would vary depending on cinema sizes and COVID-safe measures would be in place.

"We've definitely seen over the past few months a thing that I would best describe as COVID confidence,"
he said. "When there's a long time with no community transmission, the confidence of the public to go out and do things increases.

"The [latest spike] is not the news we were hoping for."

Eddie Tamir, the owner of the Randwick Ritz in Sydney as well as the Classic, Lido and Cameo cinemas in Melbourne, said there had been encouraging trading since reopening in both states, with retro screenings popular as well as new releases.

"People are coming clearly despite the challenges," he said. "Wonder Woman and Croods are clearly the mainstream action [but] there's a whole range of cross-over and limited-release films as well which are very important to our particular cinemas so we're appealing to all different segments."

While it was a positive that Wonder Woman held to a Boxing Day release to become the first Hollywood blockbuster since Tenet on reopening, it has been a brutal year for cinemas.

Keogh expected annual box office would be about 35 per cent of last year's $1.228 billion.

Even if there is decent trading over the holidays, with optimism about the Australian films The Dry and Penguin Bloom next month, cinemas are far from being profitable.

"As much as we'd like to say we're in recovery mode, we're still in that border line between survival and recovery," Keogh said. "We think January will be OK but the release schedule is a little thin for February-March.

"The one we're still hanging on for as an industry is Bond [in No Time To Die] on April 1. If Bond goes in April and the vaccine takes hold, there's almost a big movie every week for the rest of the year."