Home » Lifestyle » Cheap, and eco-friendly… How tiny homes are the next big thing

Now that’s downsizing! Satisfyingly cheap and a canny way to avoid planning rules… Are tiny homes the next big thing?

Haven’t heard of the Tiny House Movement yet? You soon will.

To the uninitiated, tiny homes look like posh playhouses for grown-ups and measure about 400 sq ft or less. Often built on wheels so they can be towed from one location to another, their mobile status means owners can evade some planning laws, as their homes are viewed in the same category as caravans.

They are usually two-storey, built from high-quality materials and cost £60,000 on average. Not that their appeal is confined to the cash-strapped — multi-billionaire Tesla boss Elon Musk is a fan, having recently sold six of his seven properties and relocated to a tiny house in Texas.

There are some 10,000 of them in the U.S. but currently only an estimated 200 in the UK, in part due to legalities about where they can be built. Here, three owners reveal why their tiny homes have made a big difference to their lives. 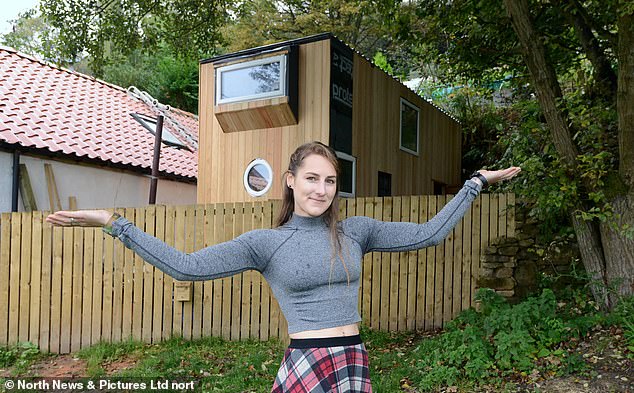 Katie Grayson, 32, works in hospitality and lives in North Yorkshire. She is building her petite pad herself 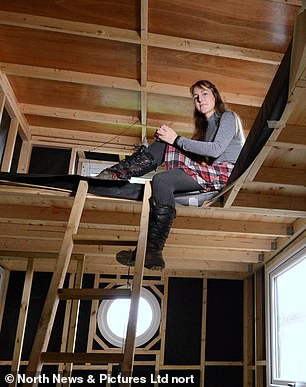 Katie’s tiny home is 6m long by 2.5m wide and 3.5m tall, with two loft spaces and a mezzanine floor at either end, which house a bedroom and chillout space with a futon

I’m building my petite pad myself

Katie Grayson, 32, works in hospitality and lives in North Yorkshire. She says:

More than a decade ago I went travelling around Europe with two friends in a little Renault Clio, laden down by a huge rucksack of clothes, toiletries, other belongings and books. That’s when I first realised I didn’t need so much stuff.

Three years later, I went to teach English in Japan for a year and boarded the plane with nothing more than a small carry-on rucksack, a Kindle and a love of Netflix instead of space-consuming DVDs.

While on my travels, I came across tiny homes online and watched videos of people building and living in them. They appealed to my new, pared-down, sustainable outlook, so I decided lockdown was the perfect opportunity to build my own.

The hardest part was taking the plunge — but once I’d told people I was going to build a tiny home, I had to get on with it.

I ordered the trailer base last December and it arrived in July complete with windows and a rot-resistant timber frame, all costing £6,000. For the past three months, I’ve been building it by hand on my boss’s father’s land, while I live-in at the hotel where I work. At some point, I’ll probably move it elsewhere. I can safely say it’s one of the hardest but most satisfying things I’ve ever done.

My dad and my boss have been a terrific help and I’ve watched endless YouTube videos to teach myself how to fit windows, attach cladding and install insulation. I’ve learnt to use power tools, a circular saw and a jigsaw cutter.

My next challenge is to install a log-burning stove and tackle the electrics. After that, I’ll get on with the décor and furnishings, which I intend to make myself.

My tiny home is 6m long by 2.5m wide and 3.5m tall, with two loft spaces and a mezzanine floor at either end, which house a bedroom and chillout space with a futon. Outside, it even has a tiny garden, with vegetable boxes.

Friends and family are supportive and my parents love it.

The aim is to move into it in the new year, having completed it within my overall budget of £18,000. As a thank you to everyone who’s helped and cheered me along, I’ll be throwing a tiny housewarming party. 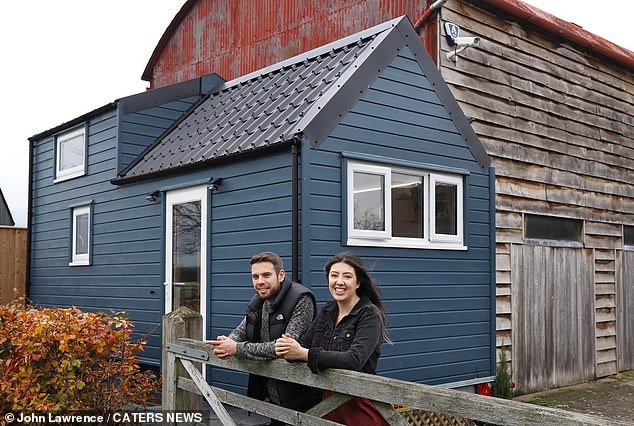 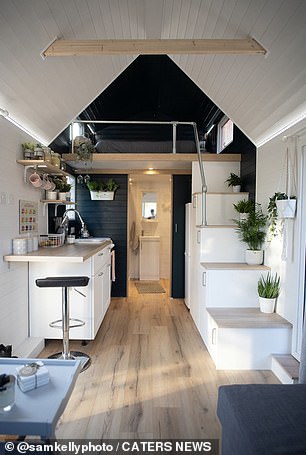 Our entire house is smaller than my parents’ kitchen

Grace Stringer, 26, manages a gin distillery and lives in Worcester with her DJ partner Craig Jukes, 32. She says:

As our home is just 20ft long by 8ft wide and 14ft high, there’s little danger of Craig or me mislaying our phones or car keys in it — or having to search for long if we do.

We moved in last year and it has completely changed our way of life for the better. With no room for saucepans in every size or coats in every colour, we have got rid of a lot of unnecessary stuff, including most of my once vast make-up collection.

When we met three years ago, Craig lived in a two-bedroom home in Herefordshire and I was at my parents’ five-bedroom farmhouse. Now our entire home, affectionately named Tiny Blue, is smaller than their kitchen. But I love it and am proud to own a home with no mortgage — something not many people my age can say.

After several years of watching YouTube videos about tiny homes, I was adamant I wanted one. I’ve loved the cosiness of small spaces since I was a child playing in my Wendy house — and although I liked the idea of having my own home, I didn’t want to move far from Mum and Dad. Owning a tiny house on their land was the perfect compromise. My parents — Dad is a surveyor and Mum is a retired hairdresser — had reservations at first, though. Dad said putting my money into bricks and mortar would have ‘made more sense than building a shed on wheels in the garden’.

Undeterred, in September 2019 I bought the timber frame for £25,000, using savings and a bank loan, then spent £10,000 and six months fitting out the inside with help from family and friends, including my parents — who soon became very supportive — Craig, his dad who’s a plumber, and a carpenter we know.

Downstairs is an open-plan kitchen, diner and living area, with a sofa bed that sleeps two. The bathroom has a cassette toilet like you’d get in a campervan, a shower, wardrobe space and plenty of storage for my remaining make-up. Upstairs is our bedroom with a double bed.

Craig and I don’t get frustrated with each other in our little home, probably because we’re both out working much of the time and have loads of outside space. But we recently got a Labrador puppy who comes in with muddy paws, so we are constantly mopping up.

We are connected to mains electricity and have a gas canister for our hot-water heater and oven, but we need to use everything on minimal power. For example, I have a travel hairdryer now, as it’s lower voltage than a standard one.

My biggest regret is not putting in underfloor heating. Because our home is raised off the ground on wheels, the cold gets underneath. However, we do have two low-voltage radiators to keep it warm.

Friends who visit are always amazed that the house is bigger inside than it appears.

Being able to put the tiny house on my parents’ land meant we bypassed common problems that many owners have. We didn’t need planning consent because it sits next to my parents’ house and falls within their planning boundaries.

Craig doesn’t miss his old home, although he does nip back regularly for lads’ nights with the friends he now rents it to. And we regularly invite ourselves next door for supper, as Mum’s a terrific cook. 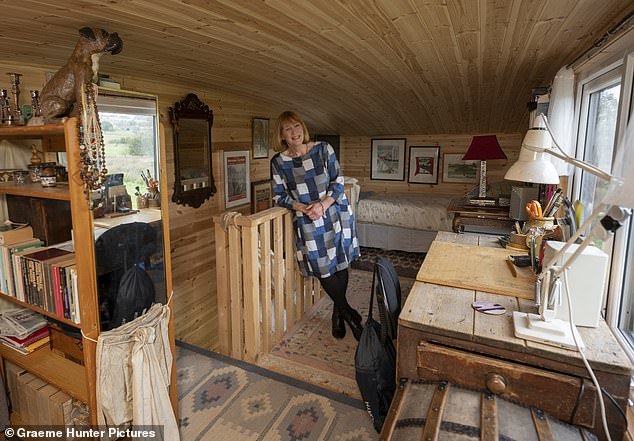 Sue Bell, 71, is a retired gardener and theatre stage manager and lives in Central Scotland after moving out of her seven bedroom home

I had seven bedrooms but a bijou nest is bliss

Sue Bell, 71, is a retired gardener and theatre stage manager and lives in Central Scotland. She says:

One Friday afternoon in 2019, I was listening to Radio 4 as I pottered in the seven-bedroom house where I’d lived for 25 years, when I heard a segment about a company called Tiny Eco Homes.

I wanted to be kinder to the planet and had no need for such a large house, so I arranged a meeting with them.

After discussing designs, we came up with plans for an 8ft by 23ft house — a space I marked out on the floor of one of the reception rooms, so I could work out what furniture would fit into it.

Then I set about getting rid of furniture, clothes and my beloved books — I downloaded them onto my tablet — and all sorts of other ‘stuff’ we accumulate.

Apart from a washing machine, I didn’t buy anything new for my tiny house when I moved in last April. The house cost £65,000. The best thing is, nobody else has lived here — it’s truly mine. 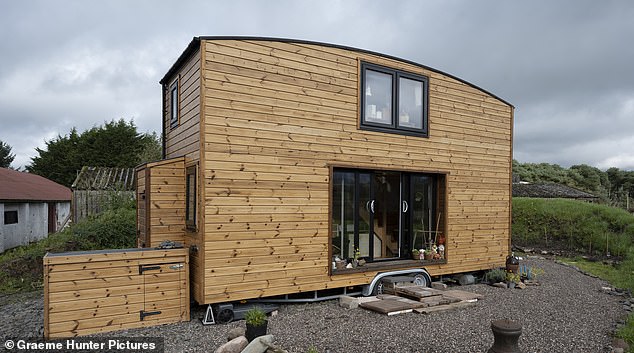 People are astonished when they learn that I’m claustrophobic, yet not in my tiny house. Ironically, I felt hemmed in at my old house in a city. Here, I wake up every morning and step out of the big glass sliding doors at the front onto the agricultural land where I rent a plot.

Built from kiln-dried pine, my home has underfloor heating, a kitchen and living area, shower room and central staircase leading up to a large space with my double bed, a huge TV and a single bed at the other end.

Fortunately I’m only 5ft 2in tall, so I don’t bang my head on the ceiling. I rely on electricity from the Grid but hope to have a water filtration system soon.

I won’t lie, I was apprehensive about the eco-friendly composting toilet but it works perfectly and doesn’t smell. I think it puts friends off coming to stay, though, which is a top tip for anyone not keen on house guests!

My dog and I have every luxury we could want, but all in miniature. It can be a bit lonely sometimes but I adore it and it’s my forever home.