Businesses that have fallen off JobKeeper will retain the power to cut staff hours by as much as 40 per cent if they can show their turnover has fallen at least a tenth under a Morrison government plan to save jobs.

Attorney-General Christian Porter unveiled the bill, which will be debated by Parliament this week, as part of the government's plan to extend JobKeeper payments at a lower rate until March next year after negotiations with the Australian Council of Trade Unions. 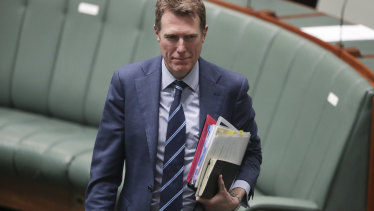 The eligibility threshold smooths the way for the changes to pass Parliament and staves off some of the harshest critiques from Labor, which had complained even businesses recording profits could be handed the power to reduce workers' hours if there was no eligibility test.

Mr Porter, who is also industrial relations minister, said the 10 per cent threshold would let businesses keep operating as the economy recovers post-pandemic and emphasised the changes are not permanent.

"It is important that the flexibility … continue to be provided to businesses which are on the road to recovery but which haven’t made it out yet, to ensure they can continue to trade, keep people in jobs and continue to rebuild as we emerge from the pandemic," Mr Porter said.

Accountants will be able to certify large businesses have passed the 10 per cent threshold each quarter while small businesses with fewer than 15 employees can self-assess, with penalties for those that lie. Those that pass can reduce staff members' hours down to a floor of 60 per cent what they were working before March this year.

The government had signalled last month it would continue the full suite of JobKeeper workplace flexibilities for all businesses that had been on the program but seen their revenue bounce back so they no longer qualified.

But in the most recent financial reporting season some companies on JobKeeper posted record profits and the union movement signalled its anger at the proposal.

Businesses with less than $1 billion in annual revenue need to suffer a 30 per cent drop in turnover before they can qualify for JobKeeper, which will give full time workers $1200 a fortnight and $750 for those doing less than 20 hours a week.

Labor leader Anthony Albanese said on Monday that jobs warnings sparked by the Victorian second wave and border lock downs made the case for JobKeeper to be retained at a higher rate.

"What we don't want to see is a premature withdrawal or reduction in support such that it makes the recession deeper and longer," Mr Albanese said.

Employers that remain on JobKeeper will retain their powers to cut hours for full-time and part-time workers, and change duties and work locations, but will no longer be able to tell staff to take annual leave as they were under the first phase of JobKeeper, which expires in September.

Innes Willox, chief executive of business body Ai Group, said the 10 per cent test was "reasonable and proportionate". The Australian Council of Trade Union said the government had moved on its key concern that businesses could reduce workers' hours unnecessarily but stopped short of endorsing it.

"We are still concerned that workers without a wage subsidy could be left disadvantaged," ACTU president Michele O'Neil said. "Whilst we do not believe there is a need for this legislation, we will continue discussions."

Labor will consider the bill before deciding whether to support it. "We welcome the news the government has backed down on the most extreme part of this plan," the party's industrial relations spokesman Tony Burke said.