Health Minister Greg Hunt will review independent advice that genetic testing for three rare but serious diseases should be funded by the government.

Women's health and genetics experts say subsidising reproductive carrier screening for fragile X syndrome, cystic fibrosis and spinal muscular atrophy, which costs about $400, will give women more choice when it comes to starting a family. 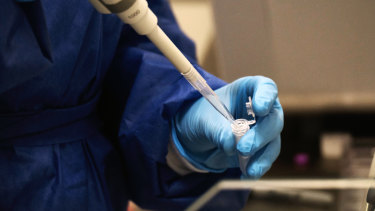 Genetic screening for the three conditions currently costs about $400.Credit:Bloomberg

The Medical Services Advisory Committee advised Mr Hunt the testing should be listed on the Medical Benefits Scheme.

Dr Melody Caramins, who was the clinical lead for the Royal College of Pathologists of Australasia's application to the committee about funding the screening tests, said the diseases were severe and relatively common.

"When you look at the three together – fragile X syndrome, cystic fibrosis and spinal muscular atrophy – one in 20 women will be carriers of at least one of the diseases," she said.

Put together, the number of children with those three diseases was the same as the number born each year with Down syndrome, Dr Caramins added.

A spokesman for Mr Hunt said the government would review the recommendation.

"This is a personal passion for the minister," the spokesman said, adding the recommendation followed the government's $20 million investment into the Mackenzie’s Mission trial to fund a pre-conception genetic screening trial for rare and debilitating conditions.

The Royal Australian and New Zealand College of Obstetricians and Gynaecologists (RANZCOG) recommends all women wanting to start a family are given information about screening for fragile X syndrome, cystic fibrosis and spinal muscular atrophy.

RANZCOG spokesman Steve Robson said the screening cost, combined with the cost of treatment or care for the conditions, created the potential for "genetic haves and genetic have-nots".

"People that have the fewest resources to look after a disabled child are at the biggest disadvantage with the cost of testing," Professor Robson said.

Research by Professor Robson and Dr Caramins, published recently in the Australian and New Zealand Journal of Obstetrics and Gynaecology, backs this up.

It estimated more than 1.36 per cent of women who were pregnant or planning a pregnancy decided to take the test, with 78 per cent of those women in the two top socio-economic groups.

Dr Caramins estimated 50 per cent of women would opt to have the test if it were free.

Spinal muscular atrophy in its most severe form is lethal. Professor Robson said that was a tragedy in itself, but one of the big issues was the cost of treatment.

"Now there are therapeutics available, but with drugs that cost $100,000 a dose we have a situation where a child may require treatment with these lifesaving but unbelievably expensive treatments," he said.

Cystic fibrosis is a life-limiting disease that causes damage to the lungs, digestive system and other organs. Treatments, which can include medication, physiotherapy and lung transplants, have been inproving and can ease symptoms.

Fragile X is a rare disorder but one of the most common forms of inherited intellectual disability and the severity of the condition can vary.

Dr Caramins said the testing was not about telling women they should or should not have children naturally, but rather giving them "reproductive confidence".

If a woman tested positive for one or more of the conditions, couples had a number of options including doing IVF and having the embryos tested, adopting, opting not to have children, or having a natural pregnancy but being forearmed with knowledge.

"There's a real rainbow of options depending on people's beliefs and what suits them," Dr Caramins said.

The most important news, analysis and insights delivered to your inbox at the start and end of each day. Sign up to The Sydney Morning Herald’s newsletter here and The Age’s newsletter here.