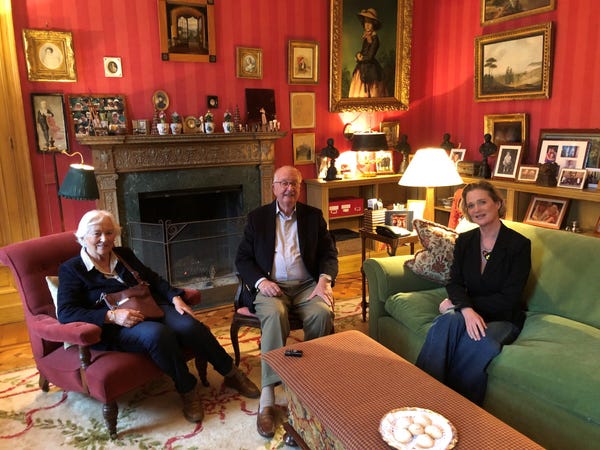 Princess Delphine has been photographed meeting her father, Belgium's former King Albert II and his wife Queen Paola for the first time.

The 52-year-old princess, who previously went by the name Delphine Boël, was born after the former monarch reportedly had an affair with her mother, Baroness Sybille de Selys Longchamp.

Delphine has publicly said the former monarch was her father since 2005. She started court proceedings in 2013, which ultimately led to a court ordering Albert II to take a paternity test. The 86-year-old — who has three children with his wife — publicly accepted Delphine as his daughter in January.

A statement released on behalf of Delphine, Albert, and Paola describes the trio's meeting on Sunday as a "time for forgiveness, healing, and reconciliation."

"This Sunday, October 25, a new chapter opened, imbued with emotions, appeasement, understanding and, also, hope," the statement reads, according to Hello! Magazine.

"Our meeting took place at the Château du Belvédère, a meeting during which each of us was able to express, calmly and with empathy, our feelings and our experiences," the statement continues.

It added: "After the turmoil, the hurt, and the suffering, comes the time for forgiveness, healing, and reconciliation. It is the path, patient and sometimes difficult, that we have decided to take resolutely together. These first steps open the way that it is now up to us to pursue peacefully."

Earlier in October, Delphine met her half-brother, the ruling monarch King Philippe, shortly after she was granted a princess title by the court. Albert abdicated the throne in 2013, citing ill health as his reason to do so; his son, 59-year-old Philippe, ascended shortly after.

"We talked about our respective lives and areas of shared interest," Delphine and Philippe said in a joint statement about the meeting. "This bond will further develop within the family setting."

As Insider's Samantha Grindell previously reported earlier this month, after being given princess status in September, Delphine is now eligible for a royal inheritance upon the King's death. And although she won't receive a royal endowment, as Grindell wrote, her father must pay her legal fees.

"A judicial victory will never replace a father's love, but it does offer a sense of justice," Marc Uyttendaele, an attorney for Delphine, told the BBC at the time. "Many more children who have gone through similar ordeals may be able to find the strength to face them."

Representatives for the Belgian royal palace did not immediately respond to Insider's request for comment.