China is well on its way to achieving its goal of complete military modernisation by 2027 and already has more warships and submarines than the US. China’s shipyards launch a new sub every year or so.

Australia is well on its way to achieving world champion status in faffing about with submarine acquisition. As of Thursday, Australia has no agreement with anyone to build any new submarines whatsoever. 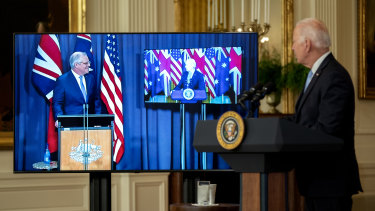 Prime Minister Scott Morrison has signed an agreement with the United States and Great Britain on nuclear-powered subs.Credit:Bloomberg

China has 66 submarines. It’s expected to have 10 more by 2030, six of those nuclear powered, according to the US Office of Naval Intelligence.

By that time, Australia will have exactly as many subs as it has today, which is the same number it had a quarter-century earlier, according to the Morrison government’s statements on Thursday.

That is, Australia will have the same six Collins-class, diesel-powered subs that were first commissioned by the Hawke government, assuming they’re still functional. Their retirement has been postponed repeatedly as successive governments – Labor and Liberal – have fumbled their replacements.

So what was all the fanfare from Scott Morrison, Joe Biden and Boris Johnson on Thursday? Australia, the US and UK have announced an “enhanced trilateral security partnership”, the inelegantly named AUKUS. It is not a treaty and doesn’t pretend to be.

But it does represent an increased level of trust and an intensified commitment to share technology and advanced weaponry. This includes co-operation on some of the same next-generation technologies that Beijing has declared as its highest tech priorities – quantum computing, quantum communication, artificial intelligence and cyber.

This could prove to be the most important element of the agreement in equipping Australia for its own defence in the longer run, if it’s executed intelligently, a major caveat.

As US President Biden put it, AUKUS is a “historic step to deepen and formalise co-operation among all three of our nations because we all recognise the imperative of ensuring peace and stability in the Indo-Pacific over the long term.”

Australia has spent the post-war era fantasising about nuclear power for its submarines. Until now, that’s all they were, fantasies.

But the three wartime allies have chosen to announce as their first initiative a plan to help Australia acquire nuclear propulsion technology for submarines.

Australia has spent the entire post-war era fantasising about nuclear power for its submarines. Until now, that’s all they were, fantasies.

Morrison gets credit for persuading Washington and London to share their closely held nuclear expertise with Canberra. But what’s Australia going to do with it? Beyond the theatrics of the announcement, what is the practical outcome?

First, the Morrison government has cancelled the existing contracts to buy 12 French-designed submarines. This was the deal that the Turnbull government struck five years ago. The subs, to be built in Adelaide based on French design, were to cost an estimated lifetime total of $90 billion. The first was supposed to enter the water in about a decade from now.

That agreement, which was feted as the basis of a new era in strategic relations with France, is now dead. All that remains is an argument about how much Australia will have to pay to cancel. And a deep sense of French dismay and betrayal. Much as Australia’s abortive deal for Japanese subs ended years earlier. 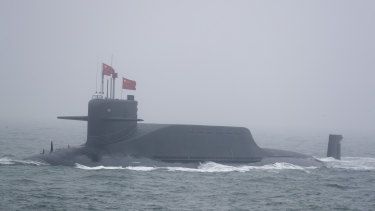 And in its place? The Morrison government has announced an interdepartmental committee to spend the next 18 months talking to the US and UK “identifying the optimal pathway to deliver at least eight nuclear-powered submarines for Australia”. They’re to be built in Adelaide, the government tells us, so that will require a full reconfiguration of the shipyards and workforce. But there is no known design and certainly no contracts. In other words, it’s a plan to have a plan.

But we know from the Morrison government that the proposed new nuclear subs will be delivered years later than the French-designed subs, and cost more. And because it’s planning “at least eight”, Australia could end up with fewer than the 12 in the previous deal.

Nuclear propulsion will, if it ever becomes operative in an Australian sub, allow them to remain on station longer, underwater longer and travel faster. The subs aren’t proposed to have nuclear arms.

The nuclear reactors that drive them would be inserted as sealed units by the US or UK. Canberra says that no civil or military nuclear capability will be developed in Australia.

“We’d be buying a nuclear reactor in a box,” says ASPI’s sub specialist, Marcus Hellyer. “It does make us even more dependent on the US. At any point, they can turn off the technology. The question then is what expertise we can develop to operate and sustain the subs.”

Australia can now contemplate another decade or two with no new subs. And even if this proposal goes to plan, Australia will not have a full sovereign capability but an increased defence dependency on the US. Perhaps Morrison thinks that America, having produced one Donald Trump, could not possibly produce another.

So when Beijing’s spokesmen fulminate against this announcement, don’t be surprised if they have to pause to laugh into their sleeves.

Get a note direct from our foreign correspondents on what’s making headlines around the world. Sign up for the weekly What in the World newsletter here.