Home » Lifestyle » Aussie musos in with Grammy chances, as others blast ‘corrupt’ awards

Sydney musician Flume has one overriding hope around his nomination for best dance recording at Monday’s Grammys: that his internet connection holds up long enough to get through the virtual ceremony.

“No way did I expect to be nominated for a Grammy,” says the producer, real name Harley Streten, of the surprise journey of earworm single The Difference. The track was made during “a day session” with fellow indie fave Toro y Moi (Chaz Bear) and released more than a year ago. 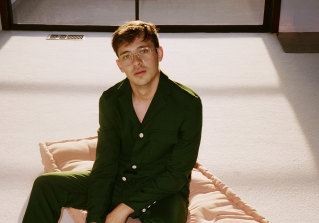 Sydney producer Flume is up for a Grammy for best dance recording.Credit:Zachary Chick

“Sometimes these tracks can fall through the cracks, the ones that aren’t part of a proper album campaign. So it feels very validating or something, like the work feels official,” Flume says. “But it’s going to be a very different Grammys this year. It’s going to be on Zoom.”

After years of living in Los Angeles, he relocated to NSW’s Northern Rivers at the beginning of the year, seeking both “a slower pace of life” and a safer refuge from the COVID-19 running rampant in the US. But when the weather turns, so does his Wi-Fi.

With Grammys producers planning to beam him in for Monday’s telecast, hosted by Trevor Noah, in the event of a win, Flume’s somewhat anxious.

“I’m surrounded by farms here. I don’t have good internet and if it rains, the internet’s worse. So I’m praying it doesn’t rain. If it rains, I’m done.”

Other Aussies up for prizes on Monday include Tame Impala for best alternative music album for The Slow Rush and best rock song for Lost In Yesterday, and Hillsong Young & Free for best contemporary Christian music album for All of My Best Friends. 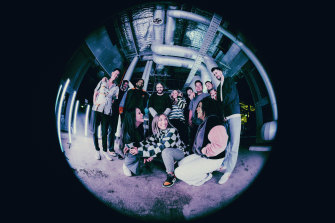 Bizarrely for the latter, largely used to the general neglect their work is afforded in the secular mainstream, their nomination comes with an intriguing wrinkle: they’re going head to head with pop icon Kanye West, whose Christian pivot, Jesus Is King, is nominated in the same category.

“It is strange to be alongside someone who has made such an impact on pop culture throughout the years,” says the group’s leader Laura Toggs. “But we’re just grateful to be included at all.

“I think Kanye is a masterful creative and I loved the album, Jesus Is King – he was bold in his faith and I respect that.”

But like any awards show in 2021, this year’s Grammys are facing controversy.

Fans and critics have lamented snubs around both acclaimed and popular releases (Fiona Apple’s critically-revered Fetch the Bolt Cutters is consigned to the rock and alternative categories, alongside Phoebe Bridgers’ impactful Punisher), and major nominations for minor fare (who even are Black Pumas, who are challenging for record and album of the year?).

And although Taylor Swift’s viral Folklore, Dua Lipa’s pandemic-disco Don’t Start Now, and Beyonce’s #BlackLivesMatter anthem Black Parade are tipped for the top awards, there’s an overriding feeling the Grammys have once again defied the zeitgeist.

“It feels like what 50-year-olds think popular music was like,” quipped New York Times music critic Jon Caramanica while recently discussing the record of the year category.

Major musicians – including Halsey and The Weeknd, whose 2020-dominating album After Hours somehow failed to land a single nomination – have come out firing, slamming the lack of transparency in the Recording Academy’s membership and voting practices, even accusing it of being “corrupt” and open to “bribes”, the same sort of ethical concerns that rocked the Golden Globes’ Hollywood Foreign Press Association just last month.

On Friday, The Weeknd announced that he’d be boycotting the Grammys going forward “because of the secret committees” that decided on the prizes.

Such critiques and questions over the Grammys’ decision-making and relevance have long plagued the awards.

In 2017, Adele – whose 25 won album of the year over Beyonce’s Lemonade – used her acceptance speech to essentially hand the award over to Beyonce’s “monumental” album, which she felt was more deserving. In 2018, Kendrick Lamar’s DAMN. was embarrassingly overlooked for the same award in favour of Bruno Mars’ 24K Magic, only to be awarded the actual Pulitzer Prize just weeks later. 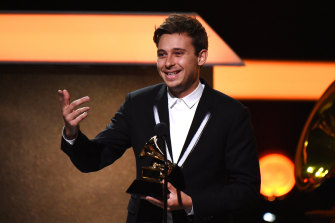 Flume accepts the award for best dance/electronic album at the 2017 Grammys.

Dr Liz Giuffre, a senior lecturer in popular music at the University of Technology in Sydney, says musicians’ criticisms of the Grammys reflect wider cultural concerns around who’s deciding who is celebrated in the arts.

“We know these institutions have been skewed against women and against people of colour, which is where these concerns come from,” she says.

“We still don’t know things like who’s in the voting membership, and once you’re in it do you leave? We might have people in there who are in their 80s and 90s, voting with their tastes. Good luck to them, but are they really the best judge of what’s happening in current popular music?”

It’s why you end up with the Grammys constantly backtracking and playing catch-up, adds Dr Giuffre, handing out lifetime achievement awards to neglected artists like Diana Ross and Public Enemy or awarding artists for work that pales in comparison to their already overlooked best (a criticism that met Beyonce’s field-leading nine nominations last November).

Which all begs the question: If we recognise that their decisions are often confounding and wrong and so out of step with the zeitgeist, why do we still lend so much cultural weight to the Grammys?

Flume, who scored a Grammy in 2017 for best dance/electronic album for his breakthrough Skin, says the win “opened a lot of doors”.

“I think for a lot of artists it feels a bit surreal and ridiculous and it was never that important to me, personally. But then I won and it was like, ‘Alright, this is a real thing that just happened,’ and it really legitimised the whole project,” he says.

“Suddenly more people were just open to working with me, and I instantly had access to a lot of different people that I didn’t prior.”

Dr Giuffre agrees that, despite the organisation’s endless list of missteps, for Australians making their mark internationally, the Grammys do remain a “really big deal” because a nomination or win does serve as a wide-scale industry launch beyond our confined shores.

“It is an important acknowledgement, and at this point it’s so iconic that the minute you say ‘Grammy’ you are up there with all the great musicians who’ve won them before,” she adds. “It’s like they say, first line of the obituary’s already written.”

The Grammys will air on Network 10 on Monday from 11am.