Aged care providers will get immunity from criminal or civil prosecution for using physical and chemical restraints after the federal government amended its aged care bill, prompting outrage from advocates for older Australians.

The government moved an eleventh-hour amendment to the bill before it went through the House of Representatives last month, giving providers immunity if they comply with a yet-to-be-created set of consent guidelines. 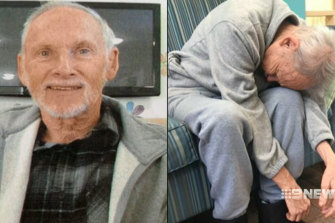 Terry Reeves is suing an aged care home for restraining him for up to 14 hours a day.Credit:ninevms

“There are tens of thousands of people in locked wards as we speak and have been for years,” he said.

Aged Care Matters director Sarah Russell said the amendment would deprive aged care residents of “the civil and criminal protections to which all other Australians are entitled” and urged senators to vote against it.

Mr Lewis is running a test case in the NSW Supreme Court on behalf of Terry Reeves, an elderly man with dementia whose case was exposed at the Aged Care Royal Commission, seeking damages for false imprisonment from the operator of Garden View Aged Care in Sydney’s west.

The royal commission heard in 2019 that Mr Reeves had been left strapped into a restraint chair 30 times in two months, for up to 14 hours a day, even though his daughters had only given permission for him to be restrained for “one or two hours at a time” and only as “a last resort.”

The case could set a precedent to allow “many others” to seek justice for being wrongfully detained in aged care homes, Mr Lewis said.

“Otherwise providers and their families were going to be in this invidious position of having to work with a piece of legislation federally that didn’t coincide with what the laws are in the states over who can make decisions about restrictive practices,” Mr Sadler said.

State and territory governments are working on uniform guardianship laws, but the reforms are moving slowly.

The Royal Commission’s final report recommended that people receiving aged care should be “equally protected from restrictive practices as other members of the community.”

A spokesman for Aged Care Services Minister Richard Colbeck said the immunity provision would ensure that providers “who may not be authorised under current state and territory laws are protected from civil and criminal liability” if consent was given by an authorised person.

The definition of who can give this consent will be defined under Quality of Care principles, which are being updated.

The spokesman said it was proposed that the updated principles would “ensure that a restrictive practice may only be used in accordance with the consent that has been provided (such as the particular type of restrictive practice, for the time specified).”

“The Quality of Care Principles also require that restrictive practices must only be used as a last resort, only to the extent that is necessary, for the shortest time and in the least restrictive form, and to prevent harm to the care recipient,” the spokesman said.

There are 229,547 people receiving residential and flexible aged care services in Australia and 52.4 per cent have dementia.