The Art Gallery of NSW has unveiled revitalisation plans for its historic galleries and modern wing including the restoration of internal balconies, its vestibule, and north-facing windows that were bricked over to create more gallery space.

The renovations, which will allow visitors to experience original elements of the building unseen for decades, will be undertaken by architects Tonkin Zulaikha Greer from next year as part of the $344 million Sydney Modern project, now under construction next door.

The cascading pavilions of the SANAA-design Sydney Modern will become home to the gallery's contemporary art collection when it opens in 2022, with the Art Gallery of NSW using the moment to restore the original Walter Vernon designed vestibule and open up key architectural elements of the 1972 Captain Cook Wing. 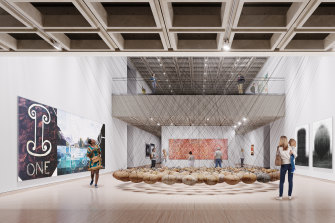 An artist’s impression of the restored gallery atrium with internal balcony.

Under the plans, the current, inadequate cloaking room at the gallery's entrance is to be relocated, allowing visitors to proceed through the original grand three-door entry.

In the Grand Courts, the original art hanging systems will be restored, the modern stairway removed, and some of the floor parquetry will also be revitalised.

Internal balconies overlooking the 8.5-metre-high atrium in the Captain Cook Wing -designed by architect Andrew Andersons – are to be reinstated allowing for the display of double-height sculptural works. They had been blocked up to provide extra hanging space for international blockbusters and the popular Archibald Prize exhibition.

Once the temporary walls are removed and balustrade re-instated, visitors will be able to stand at the balustrade on the ground floor and look directly down to the lower level as Mr Andersons originally intended with the gallery expansion.

Large windows on the northeast facade of that wing are also to be reopened, providing direct views across the proposed art garden to Sydney Modern.

Director Michael Brand said the Art Gallery of NSW would remain open while the works take place. He said the reconfigured spaces would be sympathetic to the existing gallery’s architecture while providing new ways for visitors to engage with the collection.

Mr Andersons said he was delighted key architectural features of the 1972 expansion would be reinstated some 50 years after its opening. He said demands for increased art hanging space had impacted the building's spatial qualities.

"Michael Brand wants to open Sydney Modern with a bang and it's commendable that he is intent on restoring the architectural details of the original gallery and its 1972 extension," Mr Andersons said. 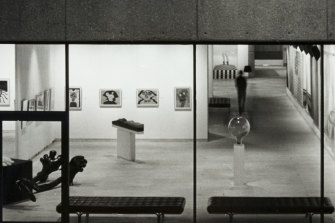 Max Dupain’s view of the interior of the Art Gallery of NSW which is to be restored.

An expanded Capon Research Library and National Art Archive will be relocated to Lower Level 3 with full public access. As a result, the library will close from December 12 and not reopen again until August 2021.

Mr Andersons said the restoration of internal balconies and window sightlines would fulfil his design intent by creating a series of interlocking exhibition spaces.

"People might be pleasantly surprised to find that it is quite an interesting building," he said. "It's usually downhill all the way once you've finished a building. Most architects get their building demolished."