Home » Lifestyle » Art down the generations at Young Archies

But the grandparents came out on top. 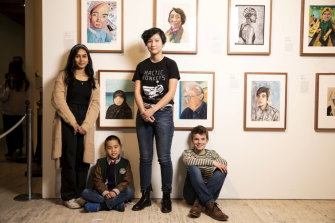 Winners of the Young Archie competition: Aysha Huq, 16; Matthew Chen, 8; Celeste Hang, 15; and Callum MacGown, 11, in front of their winning portraits at the Art Gallery of NSW.Credit:Dominic Lorrimer

Of the four age group winners, three depicted their grandparents.

Aysha Huq, 16, and Celeste Hang, 15, won for their paintings of their grandmothers Helima and Sue, while Callum Macgown, 11, painted his grandpa Danny.

Aysha said she painted her grandmother because she missed her.

"I don’t get to see her as much as I’d like because she lives in Bangladesh, but I wanted to capture her in that moment," Aysha said. "We were at Hyams Beach two years ago and she was in the water with her bare feet and she was having a really good time."

Aysha’s mum says Helima is also artistic. "She got it from my mum," she said of Aysha.

It is a connection Celeste also shares with her grandmother.

"She is really interested in painting. She used to be a fashion designer," Celeste said. "She was sort of my guardian for most of my childhood. There are a lot of memories of her. I was trying to capture her personality: wise, stubborn, but nice in a way."

"He's a very interesting person," Callum said. "He's got lots of different parts to him. He has lots of dark thoughts because he has a rich imagination, he can get quite depressed but be can almost immediately come out of that with a sense of humour."

The final winner, Matthew Chen, 5, painted his father, a medical researcher, at work.

The four winners were chosen out of a field of about 2100 entries into the Young Archies, which accompanies the famous Archibald, Wynne and Sulman Prizes and is in its seventh year.

Marikit Santiago, an artist with a work in the Sulman Prize, judged the prize and said she could understand why so many children had painted their grandparents.

"If I'm looking for portraits with stories, grandparents have the most stories don't they because they have the most experience on the Earth in our families," Santiago says. "There's that cross-generational exchange between grandchild and grandparent and all that history between them."

"Especially that winner, Callum's portrait, really captured his grandfather's essence. A lot of history in his face."

The Young Archies are on at the Art Gallery of NSW until 8 September.