So, ex-vice-chancellor of the University of Melbourne Glyn Davis, 62, is joining the board of Opera Australia and will take over as chairman. Smiles all round. 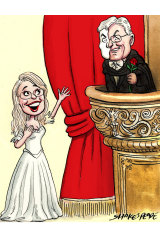 Davis, who left MU three years ago and is chief executive of the billion-dollar Paul Ramsay Foundation, joins OA next month and takes over from chairman David Mortimer early next year. Just don’t expect any Ramsay Foundation cash to flow to the COVID-starved arts organisation, which slumped to a deficit of $2.9 million.

Davis will be wielding the baton as the organisation attempts a Phantom of the Opera-led recovery next year during a time of flux.

Chief executive Rory Jeffes is off next month, replaced by Fiona Allan, the Aussie-born chief executive of Britain’s Birmingham Hippodrome.

They will have to work out what to do with totemic artistic director Lyndon Terracini, whose contract is up in 2023.

Recruiter Darren Challis jumped onto LinkedIn to drum up some credit for Challis & Company, telling everyone how much his firm “enjoyed working with OA’s Board on his appointment”.

Then came a LinkedIn love-in as the congratulations rolled in. “Congratulations Glyn. Challenging right now, but massive fun too!” posted his successor as MU VC, Duncan Maskell.

But the most enthusiastic post was from Virginia Judge, former NSW Labor Arts Minister and frustrated coloratura soprano (her career was cut short by vocal polyps).

“Hi Darren, I’m a Vanguard member of the SSO, Sydney Dance Company, and an Atelier member of the NSW Art Gallery. I would love to support Professor Glyn Davis AC and perhaps join the Board. Could you kindly put me in touch??”

As Christine sings so plaintively during Phantom, “Think of Me”.

It’s been a tough lockdown for Readings bookshop chain, with a 40 per cent drop in sales during the pandemic. But happier times are just around the corner for managing director Mark Rubbo who will open a Readings’ CBD shop in the Emporium shopping centre in December. Meanwhile the slow negotiations over an Enterprise Bargaining Agreement through the Retail and Fast Food Workers Union continue.

One CBD reader living in Northcote was surprised recently when a Readings order was delivered by none other than … Rubbo himself. 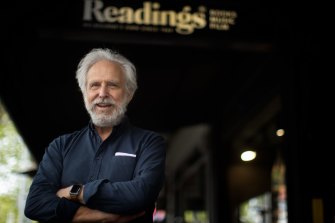 “Australia Post stopped collecting our parcels for three days, so we got on our bikes … metaphorically,” Rubbo told CBD. “I don’t think I’m very good at it. In a rush I reversed into a parked car after one delivery and damaged the bumper bar. I left a note and the owner rang to let me know a few days later and said, “The car still goes. It’s 15 years old so let’s not worry about it.” Happy days.

Big developments in the extensive investment portfolio of the freshly promoted federal Liberal MP Tim Wilson. The newly minted assistant minister for industry, energy and emissions reduction has made some changes to his investment strategy to account for his new, sprawling gig and the potential for conflicts of interest. Last week, he offloaded shares in mineral earths miner Lynas Corporation, Canadian Copper Mountain Mining and nickel miner Auroch Minerals. He’s waiting for advice from parliament on what fits with the new portfolio. 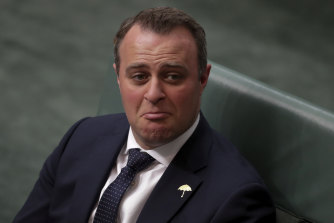 But instead of pulling out of equities, the member for Goldstein is focusing purely on exchange traded funds (ETFs) and listed investment companies (LICs) which are aggregate or “basket” style investments that cover multiple companies determined by an investment manager. As his new ministerial gig covers a “massively broad portfolio” he says he needs to be hyper-alert to potential or perceived conflicts of interest.

Investing in batched products means he has “no control over the allocation and I don’t have any problems that might crop up from investing in an individual company … it’s just easier.” If it sounds like overkill, others will attest there’s no such thing when it comes to probity. After all, Victorian Labor Treasurer Tim Pallas faced calls to resign following revelations he had been a passive investor through an ASX20 ETF in toll road operator Transurban. At the time, the company stood to make $37.3 billion in extra tolls from motorists as a result of a deal inked by his government. Pallas offloaded the ETF stake in the week after the revelations. Tough break.

But there was another disclosure from Wilson. He scored two cases of Furphy Beer from drinks giant Lion Nathan to celebrate “the Dees smashing the Dogs 140 – 66” in last month’s AFL grand final. Apparently the beers came with a note “acknowledging one needed a beer in the second quarter for entirely different reasons than the end of the third”. An accurate observation.