Longtime Animal Crossing players might remember Resetti, the hot-headed mole in denim overalls who had been in the video game franchise since the very first installment. Nintendo cut the famous character with the release of Animal Crossing: New Horizons on Nintendo Switch, leaving many fans to wonder what he might be up to today. Thankfully, the massive Update 2.0 gives players the chance to meet Resetti at Brewster’s cafe. However, he looks and acts unlike his old self sometimes. Here’s why.

For those who are unfamiliar, Resetti once had a job operating the Reset Surveillance Center. Whenever a player turned off their devices without saving the game, Resetti popped up outside the person’s in-game home to give a lecture about the importance of saving. And each time the game was reset, he grew angrier and angrier. He even made fans cry sometimes with his aggressive lectures.

Because of the negative responses some fans had to Resetti, Nintendo made him an optional feature in Animal Crossing: New Leaf. Then, in New Horizons, he basically became obsolete. The Nintendo Switch version of the game introduced auto-saving, which meant players could no longer reset the game. Thus, no more Resetti lectures.

“I think this will be a positive thing for the player because in New Horizons, you can stop playing in the middle of your game, and it’ll still save,” New Horizons project lead Aya Kyogoku told Mashable in 2019. “But unfortunately, because there’s no necessity to reset the game or reset button on the Switch, Mr. Resetti had a hard time. He was laid off from his position.”

Two different Resettis show up at The Roost in ‘Animal Crossing: New Horizons’ 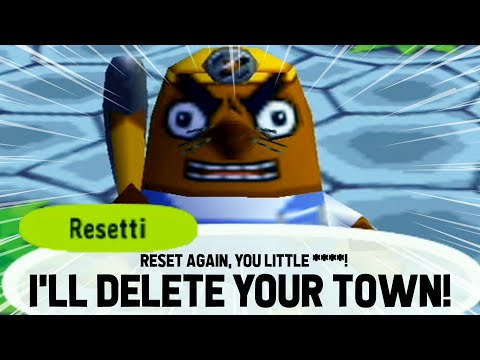 Resetti is finally back in Animal Crossing, but still not in his old role. When New Horizons added The Roost, NPCs began randomly popping into the shop to for a quick coffee break. And yes, that included Resetti. In addition to his random visits, players can now invite him with his Amiibo.

Some players might run into a thinner, lankier Resetti with a goatee at The Roost. He didn’t change his look; that’s actually Resetti’s older (and much kinder) brother, Don Resetti.

Both Don and Resetti will make occasional visits to the cafe. They’ll mention each other sometimes and chat about how they’ve worked together for many years. In previous games, Don sometimes took over for Resetti when visiting players at their homes.

It’s worth noting that Resetti is still pretty different in New Horizons than he was in past games. While he still shows his temper, he has gotten a major attitude adjustment. Granted, he does talk about how less stressed he feels these days. Maybe a break from the reset business was just what he needed.

Don and Resetti have secret roles in ‘New Horizons’

Don and Resetti weren’t left completely jobless when Nintendo implemented autosaving. As GamesRadar reported, when players call Rescue Services in New Horizons, a few hints reveal that it’s Resetti on the line. Sometimes, Don picks up the phone. If players call with zero Nook Miles, Resetti will even outright confirm his new job by telling himself, “Calm down, Resetti.”