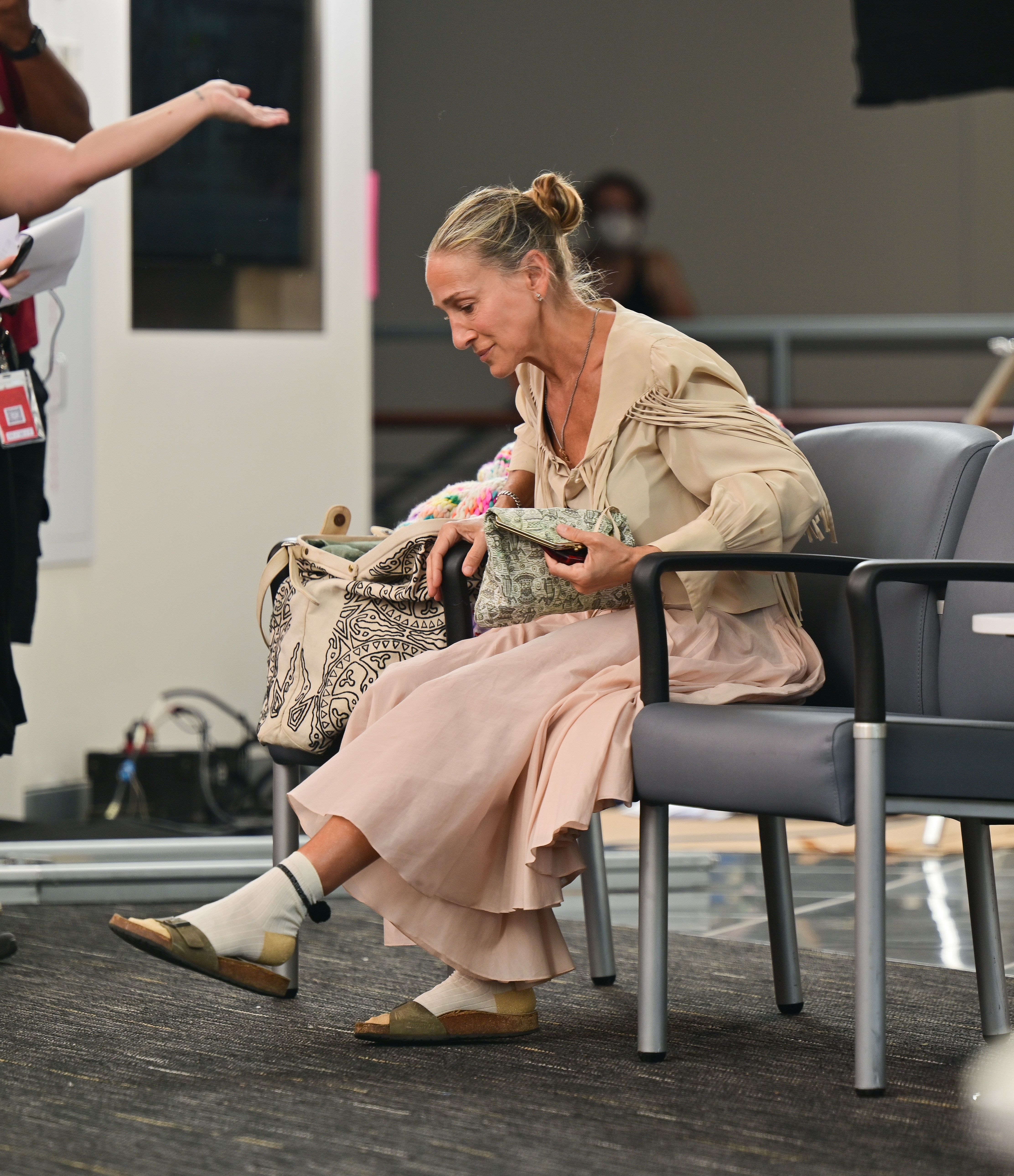 Somehow, Carrie’s And Just Like That… wardrobe just keeps getting kookier—though you can’t exactly blame her for the eccentricities shown in episode 5, which finds her loaded up on painkillers. She needs to get hip surgery, which makes for two equally huge life changes: She’s forced to both confront her age and ditch wearing heels. The latter feels just about as Earth-shattering as—spoiler alert—Miranda hooking up with Carrie’s boss in Carrie’s kitchen. In other major developments, Miranda admits that she has a drinking problem, and Charlotte does her best to accept that the 12-year-old she knows as her daughter Rose now goes by Rock and uses they/them pronouns. But fashion-wise, this episode is all about Carrie. Here, a recap of her latest notable looks.

Seema is aghast when Carrie—wearing just one bag this time (a Paco Rabanne rafia tote)—casually grabs an umbrella and uses it as a cane to walk up the stairs. A call to the orthopedist later, she’s prepping for hip surgery—and repeatedly insisting that she’s not an old lady.

Seema is back with more head-to-toe neutrals, this time in the form of a silky blouse, baggy trousers, and classic trench. (She’s certainly looking better than Carrie, who’s switched out her boho ensemble for a hospital gown.) At the girls’ first solo lunch with Anthony—who’s become quite the Samantha stand-in—she breaks the news of her congenital hip defect. “We are thrilled that you found an archaeologist to saw your old carcass open and try to put those sanded-down fossils inside you back together,” he teases.

It turns out Carrie does own a pair of flats besides the Toms she got in 2007 because they “made [her] feel like a good person.” The scene of her arrival to the hospital begins with a close-up of the Birkenstock sandals that she’s paired with pom-pom socks—a look she finds even more “unsettling” than being at the hospital in the first place. “From here down I look like a Vermont art teacher,” she tells Miranda.

Carrie does her best to make up for the “’Stocks and socks” with a flared Alaïa midi skirt and vintage fringed blouse by the obscure ‘80s-era sportswear manufacturer Betty Hanson. Miranda is back with another leather Loewe bag, a vintage MaxMara blazer topping off her belted denim dress from Akris. She’s looking something like an art teacher herself as she fills Carrie in on Charlotte sneaking her a copy of Quit Like a Woman: The Radical Choice to Not Drink in a Culture Obsessed with Alcohol. “What, curtsy to a bottle of vodka as it makes double your salary for doing the exact same job?,” Carrie quips, looking more amused than concerned.

Post-surgery, Carrie adds a bit of dignity to her hospital gown with a vintage tweed Chanel cardigan and pearls. (Though she’s not feeling particularly dignified when Charlotte has to lower her onto the toilet.)

Charlotte escorts her back home in a ruffled Alaïa top and the second Alaïa midi skirt of the episode, accessorized with some of Anthony’s Hot Fellas Bread.

Speaking of hot fellas, Anthony brought company. Carrie’s loofah-like Emilio Pucci slides take flight when one of the delivery guys carries her up the stairs of her brownstone.

Yes, Carrie really is taping her podcast while wearing that hat. Drugged up on painkillers, she fills her cohosts in on that time Samantha Jones pulled out her diaphragm. Charlotte, who’s in a Giambattista Valli dress typical of her super-femme style, is shocked when she actually says their estranged best friend’s full name.

Carrie has proven a particularly proud New Yorker over the past few episodes: Her merch collection includes this sweater, a tote bag, and a necklace in the shape of the state.

Carrie’s pale pink underwear makes a surprise appearance when, in a moment of true strife, she pees into a bottle of Diet Peach Snapple.

Carrie is looking ship captain on top, PJs on bottom when she pays her first visit to her (very attractive) physical therapist. He asks about her long-term physical goals, and Carrie replies twice for emphasis: “To get back into heels.” The slingbacks she’s added to her burgeoning flats collection just aren’t cutting it.

And just like that, after three long, hard months, she’s back to her beloved heels. (In this case, a pair of sparkly Louboutins.)