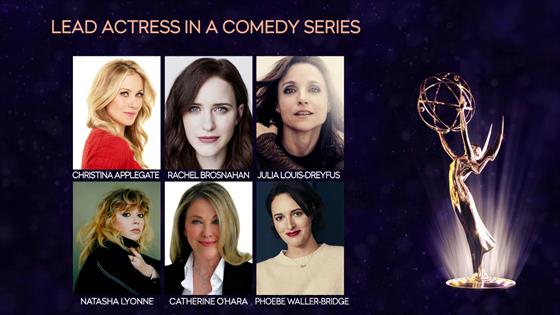 The actress and comedian’s Netflix special, Amy Schumer Growing, has scored an Emmy nomination for Outstanding Writing for a Variety Special. The nominations for the 2019 Emmys were announced by actors D’Arcy Carden and Ken Jeong on Tuesday morning, with the ceremony set for September.

After learning of the Emmy nod, Schumer took to social media to celebrate the news.

“We are very proud of being EMMY nominated for our @netflixisajoke special #GROWING as we were both on stage during filming!” Schumer wrote alongside a photo of her and baby Gene, who appears to be fist-pumping in the picture. “Very proud and excited.”

Schumer also shared a picture with her husband, Chris Fischer, who can be seen covering her mouth in the photo.

“Thank you everyone who voted and to my husband who wants me to never stop talking,” Schumer joked.

We are very proud of being EMMY nominated for our @netflixisajoke special #GROWING as we were both on stage during filming! Very proud and excited. Thank you everyone who voted and to my husband who wants me to never stop talking.

It was just over two months ago that the couple welcomed their first child together. Schumer announced her son’s arrival in early May, hours after giving birth. 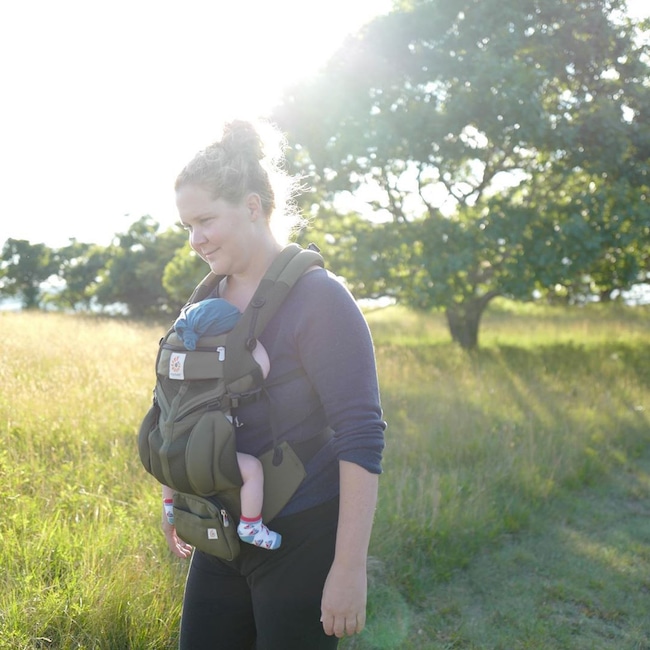 The star takes her son on a holiday walk. 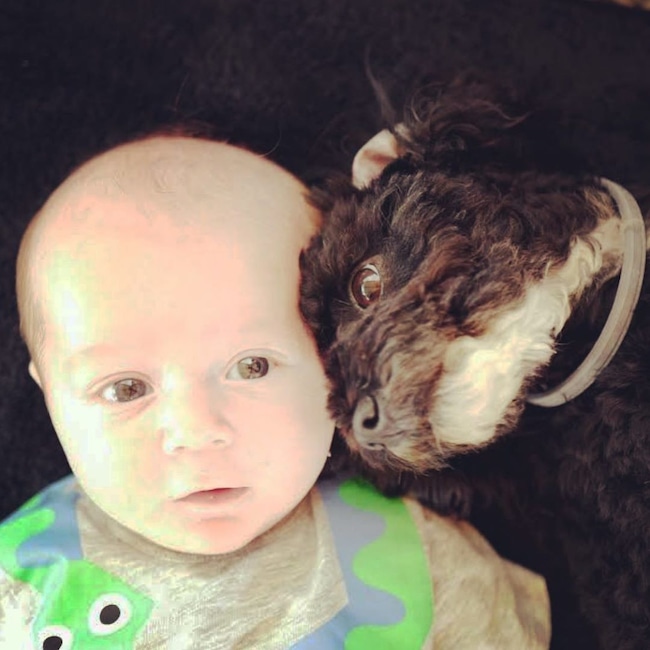 “Happy Pride babies!!!” the comedienne and actress wrote on the day of the NYC LGBT Pride Parade. 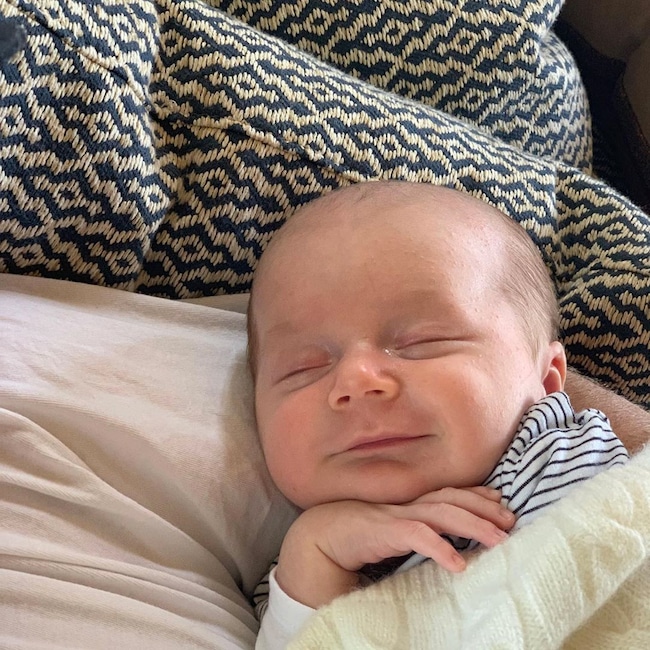 Schumer shared the clearest photo of her and Chris Fischer‘s son on June 29, writing, “Here is our son Gene. He likes looking around and laughing at his toy the black and white butterfly. Always down for a nap and a good cry if the poops are on the reg he wanted me to tell you guys he wants you to volunteer or donate here @immfamtogether.” 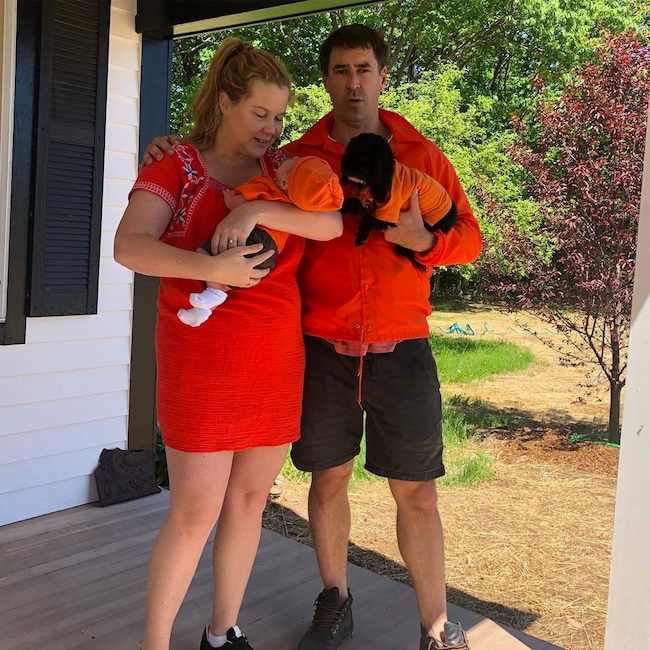 The happy parents match with their son and dog. 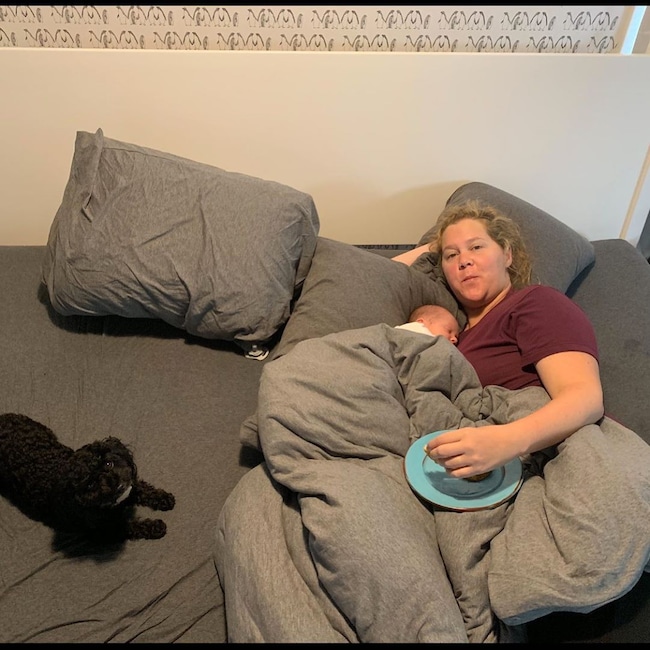 The star enjoys some snuggles with her baby boy on her 38th birthday. 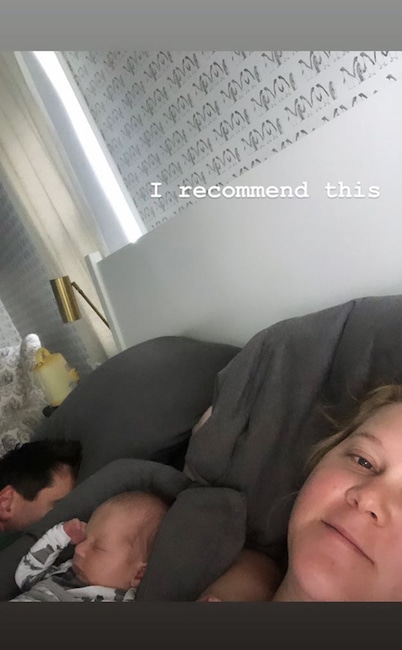 “I recommend this,” Schumer wrote on her Instagram Story. 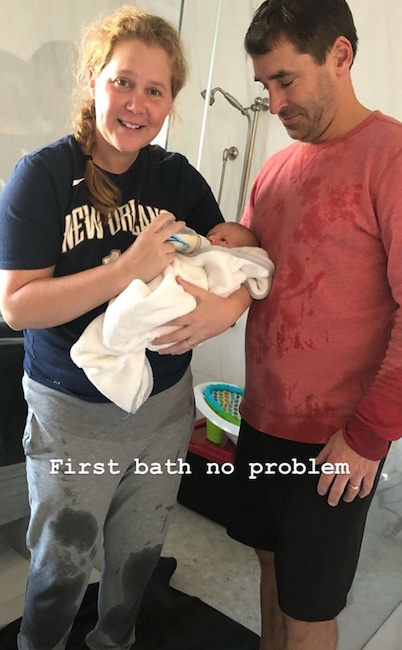 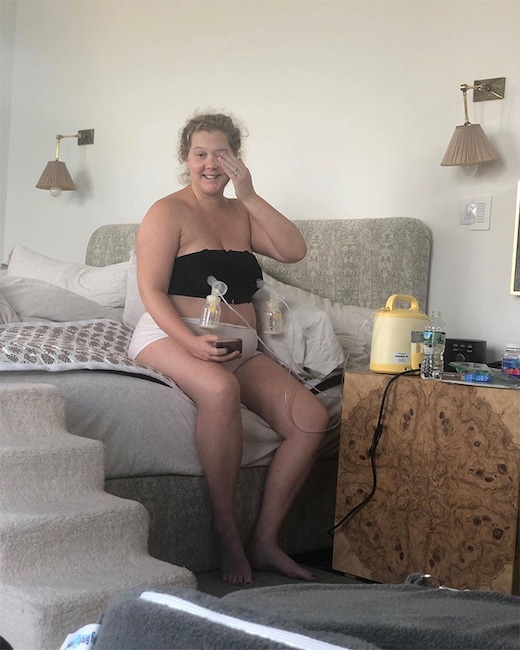 “Sending out love to the moms shaming me for doing standup last night!” Schumer wrote on Instagram alongside this pumping photo, hours after she was criticized for doing a comedy show, two weeks after her son Gene was born. 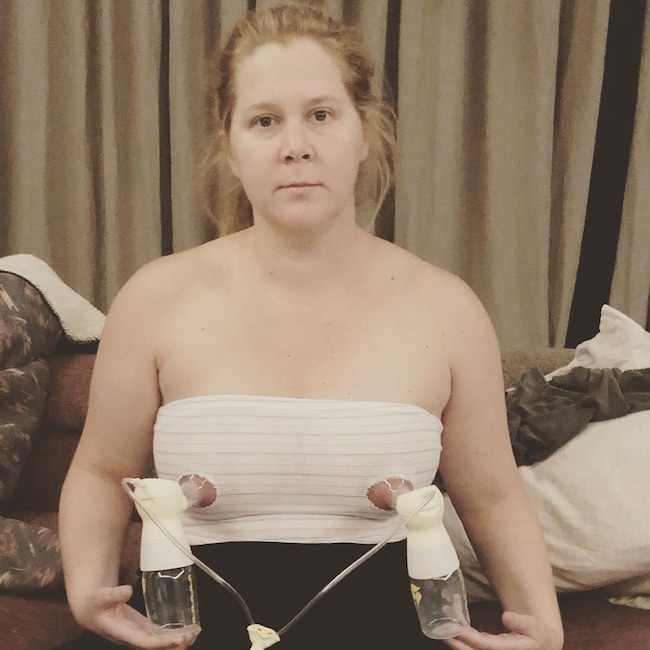 “Guys what are we doing tonight? #schumerpump #ootd @stassischroeder,” she captioned this Instagram photo, posted two weeks after the birth of her son. 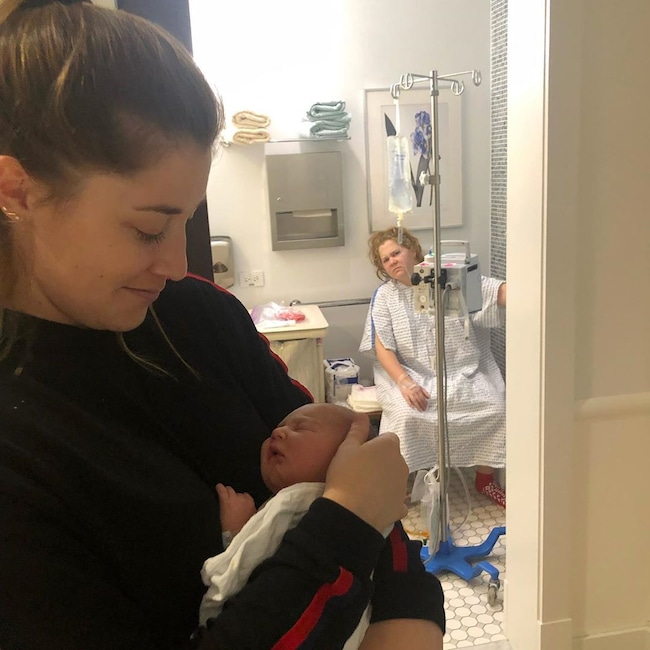 Keeping It Real on Mother’s Day

Schumer shows the not-so-glamourous part of giving birth (difficulty going to the toilet, for one) as everyone coos over her newborn in the hospital, in this photo posted on Mother’s Day 2019. Many moms, including celebs such as Jenna Fischer and Snooki, praised the star for keeping it real. 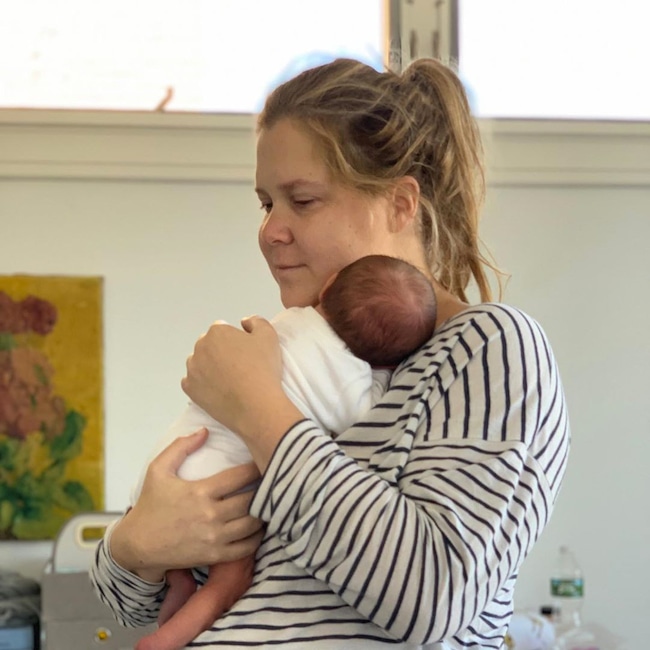 “Ok here’s my post baby annoying post and my takeaway from pregnancy,” Schumer wrote alongside this photo. “Women are the s–t. Men are cool and whatever but women are fucking warriors and capable of anything. I was lucky enough to get to have a doula.”

“I did Pilates with strong women and went for walks,” she said. “I threw up violently and felt sick mostly every day of my pregnancy. Hyperemesis is real and it’s awful. But fuck, what they say is true. The second you give birth it’s gone…All my friends. Friends I’ve had for 30 years or people who encouraged me to “keep going” or telling me “it will be worth it”. Thank you. Every woman I encountered is so willing to help and advise you and I felt all their strength. And you were right. Thank you ladies from my family. Chris, Gene and of course Tatiana #titsleaking #wearingadiaper.” 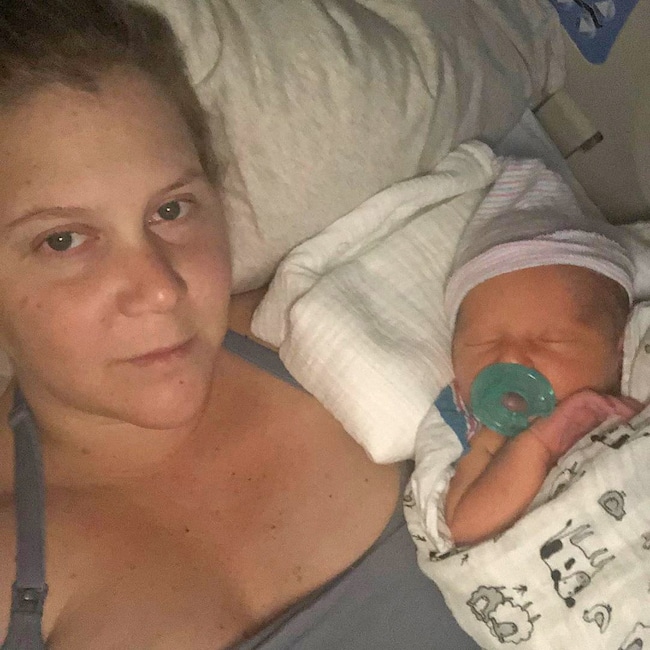 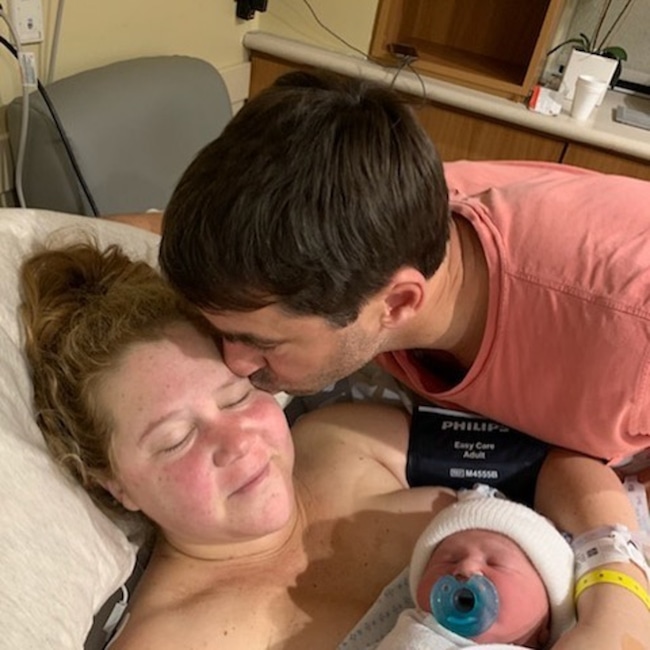 Schumer gave birth to her and husband Chris Fischer‘s first child, son Gene Attell Fischer, on May 5, 2019. A day later, she shared this touching photo of the two with their “royal baby,” who was born hours before Meghan Markle and Prince Harry welcomed their own first child, son Archie Harrison Mountbatten-Windsor.