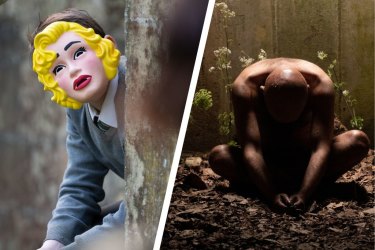 Written and directed by Alex Garland

When England nowadays is portrayed on film as a green and pleasant land, the odds are good that the idyll is a mask for horrors. That much can be surmised from the outset in Alex Garland’s otherwise bewildering Men, an ambitious slow-burn shocker set in the heart of the Cotswolds, where the heroine Harper (Jessie Buckley) has travelled following the untimely death of her husband James (Paapa Essiedu) under peculiarly painful circumstances.

On the bright side, as a young professional she’s sufficiently well-off to rent a snug but well-appointed country house dating back to Shakespeare’s day, or a century or two earlier. Beyond lie snooker-table lawns, a crumbling old church with a vicar to match, and a wood out of Winnie the Pooh. From here, things can only go in one direction, which is “horribly wrong”. But what exactly is the nature of the threat?

The title is one hint. Further context is supplied by the flashbacks to Harper’s last-ditch bid to end things with her husband, who’s revealed as both a manipulative abuser and a victim of depression (and perhaps some other mental illness). Her grief for him is thus inseparable from both rage and guilt, especially as there’s no way of knowing whether he ultimately chose his fate.

Back in the present, she encounters a series of rural grotesques, all played by the one actor, Rory Kinnear, after the fashion of The League of Gentlemen. Besides the aforesaid vicar, this all-male rogue’s gallery includes a cop, a village idiot, and a naked intruder recalling the Green Man of folklore – as well as the posh but socially unpolished owner of the property, described by Harper to her Facetime confidante (Gayle Rankin) as “very crunchy”.

Garland is an assured storyteller, and his previous work as both writer (28 Days Later) and director (Ex Machina) has brought him considerable goodwill among horror and science fiction fans. That track record makes it possible to believe for much of Men that he knows what he’s doing – even if thematically the film feels like an over-familiar mash-up of a couple of current trends.

Presumably this is meant to be a study of everyday misogyny, typified in different ways by each of Kinnear’s alter egos. It also has something to do with what has come to be known as “folk horror”: stories that play on an ambivalent fascination with the “primitive,” pre-Christian traditions supposedly persisting beneath the surface of Western civilisation.

In theory these notions could be pieces of the one puzzle, but in practice I’m not convinced Garland has worked out how they fit together. If a universal statement about gender politics is intended, as his title implies, what does this have to do with the film’s very specific conception of Englishness? How relevant is it that Buckley uses her natural Irish accent – or that James, in some sense the primary villain, is the only significant character who isn’t white? 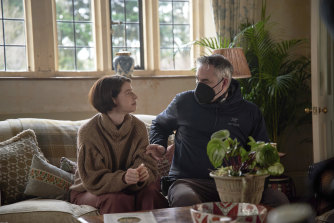 Jessie Buckley, left, and Alex Garland on the set of “Men.”Credit:AP

Yet another difficulty is that Harper as a heroine remains almost purely reactive. Buckley succeeds as well as anyone could in bringing her to life, both as a level-headed foil to all the weirdness and as the kind of bookish lass who might resort to living out a cottagecore fantasy in the aftermath of trauma.

But the flashbacks tell us nothing, for instance, about what drew her to James in the first place. Nor can we guess what she might be hoping for in the future, beyond a certain amount of peace and quiet.

That is very much not what she gets at the climax, a lunge into gooey “body horror” that renders most of the preceding riddles beside the point. Certainly, Garland can’t be accused of playing it safe. But whatever murky symbolism may be intended, the fact remains that on a literal plot level what we’re shown makes no sense at all.

So then is it all happening in Harper’s head? Interpreted along those lines, the film ends up looking like a story about a woman so shellshocked by her experience with one man she projects her paranoia onto men in general, with potentially disastrous results. That’s a sufficiently unnerving idea, but I’m fairly certain that consciously at least, it isn’t what Garland meant to say.