Opposition Leader Anthony Albanese will intensify his bid for power with a pitch to women about fair pay in his next round of policies to win over voters in the final two weeks of the election campaign, declaring he makes “no assumptions” about his party’s lead in the opinion polls.

Women will be promised new economic measures to achieve gender equity with their salaries and improve their career options in a message about the boost to economic growth by making women a bigger part of the workforce. 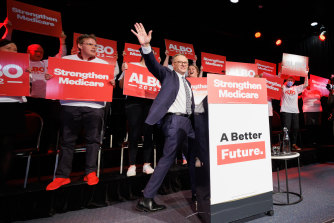 Anthony Albanese says Labor will announce a number of policies aimed at women in the final two weeks of the campaign.Credit:Alex Ellinghausen

The next round of Labor policies will include the economic measures for women, industry support from a $15 billion National Reconstruction Fund, and a focus on the cost of living in the belief that rising prices will be a decisive factor when early voting opens on Monday.

Labor will also commit $11 million on Sunday to offer free playgroups in regional and remote areas and expand intergenerational playgroups like those seen in the ABC television program, Old People’s Home for 4 Year Olds, mixing the young and the old. 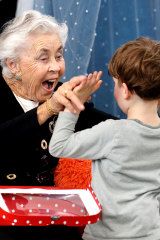 While the new spending measure is small, it is based on research that suggests children who go to playgroups are more ready to start primary school with language and cognitive skills.

Albanese has shrugged off questions about his performance in recent days by telling reporters to focus on big issues rather than “gotcha” questions, but he admitted the Labor team was cautious following the 2019 election loss after leading opinion polls for weeks against Prime Minister Scott Morrison.

“It will step up,” Albanese said of his campaign. “I’ll keep campaigning until six o’clock on election day.”

While Labor remains ahead of the Coalition in two-party terms in published polls, the Resolve Political Monitor conducted for The Age and The Sydney Morning Herald revealed a weakness in the Labor vote in Queensland that could prevent it from gaining enough seats to win power.

Asked if he believed the polls, Albanese said the published figures had been consistent but only the result on May 21 mattered.

“Labor is very guarded about the polls because of what occurred in 2019 and that experience has meant that we are totally focused on 6pm on the 21st of May and not getting ahead of ourselves,” he said.

“The polls show what people think at a particular point in time. I think though that in 2019, people didn’t know Scott Morrison, he didn’t run on a record, he ran as if he was a new government and he didn’t have a positive agenda – it was just a ‘don’t vote Labor’ campaign.

“And the media focused on Labor in 2019 because there was an assumption we would win. During this campaign, there are no assumptions. The rise of independent candidates has made the analysis of what might happen more complex.”

Labor’s policies for women already include making gender pay equity an objective of the Fair Work Act, funding 4000 homes for older women and women who have fled family violence, spending $100 million for crisis accommodation for women, paying for an extra 500 community-sector workers to help women suffering from family and sexual violence.

On the treatment of women in the workplace, Labor is promising to pass laws to impose a “positive duty” on employers to take reasonable steps to eliminate sex discrimination, sexual harassment and victimisation. The Coalition has not embraced this idea, which was recommended by Sex Discrimination Commissioner Kate Jenkins in her [email protected] report two years ago, and says it needs further consultation.

Childcare has become the biggest single spending measure in the Labor campaign with a $5.4 billion pledge to increase subsidies for 96 per cent of families, but Albanese has signalled he wants to expand the system to offer universal childcare as a social reform that lifts economic growth.

Asked if there was something new he would offer on policies for women in the final two weeks of the campaign, Albanese said, “yes, we’ll have more to say”, and added that it would be aimed at adding to economic growth.

“By and large, our major policies are out there – we’ve had our policy launch but there’ll be other events that I’m doing in the last fortnight,” he said.

“We will have a range of smaller announcements in the last fortnight which reinforce the themes that we’re running on, and one of the themes is the economic participation of women and gender equity.”

Albanese said this was an economic issue and not only a question of household costs such as the fees families paid for childcare.

“Fuller economic participation of women will not only assist to create a fairer society and greater equity, it’s good for the economy as well,” he said.

“If women are working three or four days a week rather than full time, then their capacity to contribute to business and to the workforce is undervalued and that can hold back those businesses as well.

“Some women are being left behind. But some women are also being held back from the opportunity to fulfil their potential.”