Labor leader Anthony Albanese has refused to say whether one of his MPs who admitted to branch stacking in Victoria before the state’s anti-corruption watchdog should stand down. 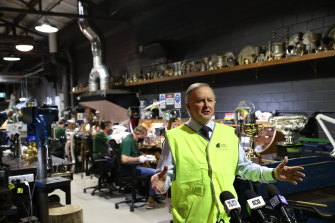 Anthony Albanese distanced himself from the problems in Victorian Labor.Credit:Dominic Lorrimer

Asked during a press conference at a metalware factory whether Mr Byrne should stay in his job, Mr Albanese declined to comment directly.

“Look, it’s not appropriate for me to comment on the specifics while IBAC’s procedures are taking place, they are legal processes,” he told reporters. “And it’s important that they be allowed to take their course.”

Mr Byrne is a longstanding MP and deputy chair of the powerful Parliamentary Joint Committee on Intelligence and Security.

Pressed on whether he believed Mr Byrne’s account of “out of control” branch stacking in parts of Victorian Labor, which is not illegal but is against the party’s rules, the Sydney-based Mr Albanese distanced himself from the state.

“I’m not a member of the Victorian branch, nor do I have detailed knowledge of the Holt electorate, and you’d be surprised if I did,” he said.

IBAC is investigating whether any taxpayer funds were directed to party political work, including via staffers paid from the public purse. Its hearings are ongoing.

Federal Labor launched a takeover of the Victorian branch supported by Mr Albanese and Premier Daniel Andrews after revelations in The Age, The Sydney Morning Herald and 6o Minutes about branch stacking conducted by Mr Somyurek and his allies.

Mr Albanese pointed to that, and his decision to expel CFMEU Victorian secretary John Setka from the Labor party in the wake of his conviction for harassing his wife via text as evidence of his insistence on high standards in the ALP.

He attempted to draw a contrast between his own approach to a national corruption commission and Prime Minister Scott Morrison’s.

“I will stamp out corruption wherever I see it,” Mr Albanese said. “I’m the leader of a political party, who wants a serious national anti-corruption commission.”

The government has proposed but not established a federal anti-corruption commission, though transparency advocates have criticised its design as too weak compared to state commissions.

Former Labor leader Bill Shorten also refused to pass judgement on Mr Byrne but said the incident showed why Australia should have a federal anti-corruption commission.

“People hate seeing this sort of stuff but frankly, I would rather it be seen and dealt with than covered up. So today will be difficult and the next few weeks, but Labor did act when it was revealed and hats off to Daniel Andrews and Anthony for taking the action they did.”

Asked on breakfast TV whether, as Melbourne MP, he had any knowledge of the branch stacking, Mr Shorten said the nature of the activities was that they were done in secret. “But it is embarrassing and I’m frustrated that it’s been going on and there is no satisfactory answer except rooting it out,” he said.

Mr Somyurek, who is no longer a member of the Labor Party, has denied all wrongdoing.