A Chinese spy ship has been tracked for a week off Australia’s west coast near a secretive naval communications base, in a move that Defence Minister Peter Dutton labelled an “aggressive act”.

Dutton made the disclosure on Friday afternoon in a press conference in Perth, eight days out from the end of the federal election campaign. 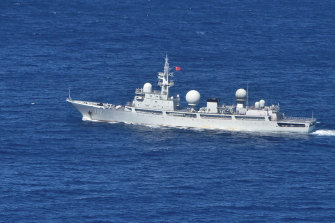 The Chinese ship has been tracked of the Western Australian coast for a week.Credit:Defence

He said the Dongdiao Class Auxiliary Intelligence ship, named Haiwangxing, went as far south as any People’s Liberation Army Navy vessel had ever been on Australia’s west coast.

The ship travelled down the west coast of Australia to the vicinity of Exmouth, before changing course to track east along the north-west coast towards Darwin.

The ship was at all times in international waters but was in Australia’s exclusive economic zone. It was likely looking to gather electronic intelligence on a secretive naval communications base that supports American and other allied submarines, called the Naval Communication Station Harold E. Holt.

“I think it is an aggressive act, and I think particularly because it has come so far south,” Dutton said in a press conference in Perth.

“For it to come south of Exmouth is without precedent and for it to hug the coastline the way in which it has and heading up towards the north.

Dutton described the vessel as a “Chinese warship with intelligence gathering capabilities”.

Asked why he was disclosing the presence of the Chinese ship in an election campaign, Dutton said it was normal practice to disclose the activities of Chinese spy ships operating so close to Australia.

“It continues the practise that we had before of making the public aware of the activity of these vessels,” he said.

“I think Australians deserve to know what is taking place. And as I say, it’s a repeat of a previous practice where we’ve made the public aware of these activities before.”

Michael Shoebridge, director of the defence program at the Australian Strategic Policy Institute, said the presence of the ship shows China is very interested in understanding Australian and allied military capabilities like communications and submarine operations.

“And they’re devoting intelligence resources to do that,” he said.

“It also shows the PLA is now routinely operating closer to Australia than in past decades.

“Public discussion of this – the increasingly close military activity – is valuable because it’s a reality that our security has to deal with. So routine public reporting of PLA presence serves a useful purpose in a democracy.”

But Shoebridge said the announcement in the middle of an election campaign “clearly also serves a political purpose”.

In a statement, Defence said it was aware of the vessel operating “off the north-west shelf of Australia”.

“Defence is actively monitoring the current activities of the Chinese Intelligence Collection Vessel off the north-west coast of Western Australia with a combination of air and maritime capabilities,” he said.

“Australia respects the right of all states to exercise freedom of navigation and overflight in international waters and airspace, just as we expect others to respect our right to do the same.

“Defence will continue to monitor the ship’s operation in our maritime approaches.”