Home » Lifestyle » After one month, Dixie Fire continues to rage with hundreds of homes destroyed

A month-old wildfire burning through forestlands in Northern California lurched toward a small lumber town as blazes across the U.S. Western states strained resources and threatened thousands of homes with destruction. More than 6,000 firefighters alone were battling the Dixie Fire, which has destroyed more than 1,000 homes, businesses and other structures

Crews were cutting back brush and using bulldozers to build lines to keep the Dixie Fire from reaching Westwood east of Lake Almanor, not far from where the lightning-caused blaze destroyed much of the town of Greenville last week.  Satellite photos by Maxar Technologies show the devastation in Greenville: 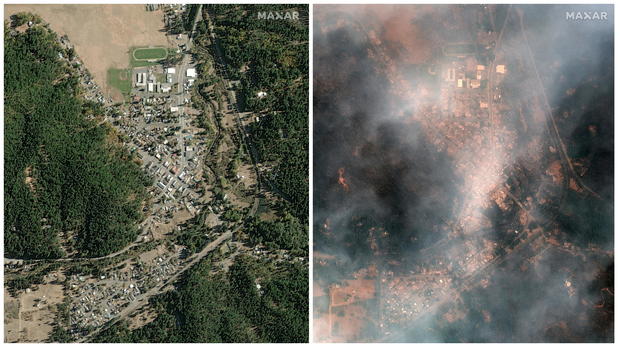 CBS Sacramento reports that the Plumas County Sheriff’s Office said there are four people who are unaccounted for in the areas of Greenville and Chester. Greenville, a town of about 1,700 people, was placed under evacuation orders Aug. 5 as the blaze inched closer.

More mandatory evacuation orders were issued Friday in Plumas County as the Dixie Fire rages on, CBS Sacramento reported. The Dixie Fire, which started on July 13, has ravaged more than 800 square miles — an area larger than the city of London

Air quality in nearby communities continues to be unhealthy due to smoke from the fire, according to the National Interagency Fire Center. 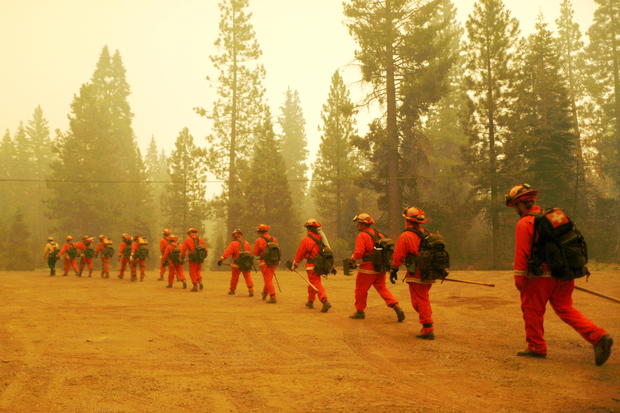 To the northwest, the Monument Fire – one of at least three large blazes sparked by lightning last month – continued to grow after destroying a dozen homes and threatened about 2,500 homes in a sparsely populated region. U.S. Forest Service officials said Friday that flying embers ignited spot fires as far as a mile ahead of the main blaze in the Shasta-Trinity National Forest.

They were among more than 100 large wildfires burning in a dozen Western states seared by drought and hot, bone-dry weather that has turned forests, brushlands, meadows and pastures into tinder.

The roughly 21,000 federal firefighters working on the ground is more than double the number of firefighters sent to contain forest fires at this time a year ago, and the agency is facing “critical resources limitations,” said Anthony Scardina, a deputy forester for the agency’s Pacific Southwest region.

There also was a danger of new fires erupting because of unstable weather conditions, including a chance of thunderstorms that could bring lightning to northern California, Oregon and Nevada, according to the National Interagency Fire Center.

“Mother nature just kind of keeps throwing us obstacles our way,” said Edwin Zuniga, a spokesman with the California Department of Forestry and Fire Protection, which was working with the Forest Service to tamp out the Dixie Fire.

In southeastern Montana, firefighters and residents were scrambling to save hundreds of homes as flames advanced across the Northern Cheyenne Indian Reservation.

The blaze was more than 50% contained. But its southern edge was still burning near the tribal headquarters town of Lame Deer, where a mandatory evacuation remained in place, and a second fire was threatening from the opposite direction.

The fires already had burned or threatened grasslands that many locals with cattle and horses depend upon for their livelihoods, Montana officials said.

Smoke from the blazes grew so thick Friday that the health clinic in Lame Deer was shut down after its air filters could not keep up with the pollution, Northern Cheyenne Tribe spokesperson Angel Becker said.

Gov. Kate Brown declared an emergency for one of the fires to mobilize crews and other resources to the area of ranches, rural subdivisions and RV parks about 14 miles (23 kilometers) from the small town of Lakeview.

Triple-digit temperatures and bone-dry conditions in Oregon, enduring a third day of extreme heat, could increase fire risks through the weekend.

Climate change has made the U.S. West warmer and drier in the past 30 years and will continue to make the weather more extreme and wildfires more destructive, according to scientists.

Dozens of fires also are burning in western Canada and in Europe, including Greece, where a massive wildfire has decimated forests and torched homes.