Home » Lifestyle » ‘A slight against the next generation’: Anderson warns of debt hangover left by pandemic

The mountain of debt accumulated to deal with the coronavirus pandemic is inter-generational theft, former deputy prime minister John Anderson has warned, as he urged the business community to stand up and demand far-reaching tax reform to help pay it down.

Mr Anderson, a key member of the Howard government, which was the last administration to deliver a budget surplus and clear federal net debt, said he had been stunned by the apparent collapse in concern about debt and the acceptance of "printing money". 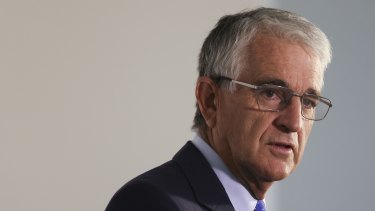 After promising to deliver the first budget surplus since 2007-08, the Morrison government is this year expecting a record deficit of $197.7 billion this financial year. Gross debt is at a record $807 billion and forecast to climb to $1.1 trillion by the end of the decade.

The Reserve Bank has cut official interest rates to a record low of 0.1 per cent while engaging in quantitative easing to support the economy. It is creating more than $160 billion to buy government debt while extending a $200 billion line of credit to commercial banks.

Mr Anderson, who served on the Howard government's expenditure review committee as it produced budget surpluses in all but two of its years in power, said the lessons of the dangers of government debt were being deliberately ignored.

He said the key message of the 1996 election was that debt was "inter-generational theft" and that had not changed.

"It is so easy to simply borrow and concerns about indebtedness seem to have really weakened. We seem to have this idea you can just print money and throw at any problem we have," he said in an interview to mark the release of the 2000 cabinet papers by the National Archives of Australia.

"I think this is an absolute slight against the next generation. We desperately need a clear explanation of why we are setting up our children for failure."

Mr Anderson did not go to the issue of what he would have done if his government had faced a pandemic.

Pressed on the issue of deficit and debt last month, Mr Frydenberg said the economy had been hit by a shock that dwarfed the global financial crisis that required an unprecedented level of support and spending.

He said net debt would fall to 38.3 per cent of GDP over the medium term while gross debt would reach 53 per cent.

"Even when it peaks it is less than half than comparable advanced economies around the rest of the world. So, Australia is very well placed to not only respond to this crisis, but to manage those higher debt levels in the future," he said.

The government has said it plans to get the economy growing much faster by boosting productivity so as to bring down debt levels.

Mr Anderson said a stronger economy would create more jobs and reduce the tax burden of all.

He said that would require strong advocacy, particularly from a business community which he accused of being more worried about social issues.

"I find it absolutely amazing that many of them will clamour on board with the latest social issue and then you turn around and find their own corporate behaviour has been such they've not done the right thing," he said.

"They ought to be standing with the government. We need to look to ourselves and recognise that we live in a community and we are in danger of really damaging our own children."

The extent of the damage caused to the budget by the coronavirus pandemic will be laid bare later in 2021 when Mr Frydenberg delivers the delayed Intergenerational Report.

The 2015 report over-estimated the national population by 206,000. While a smaller population reduces some welfare costs, it also reduces tax revenues pivotal to the budget bottom line. The same report also predicted net debt would be zero by 2031-32.