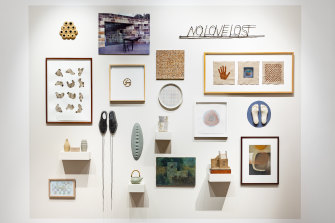 Sebastian Goldspink is pioneering a new model of curatorship – the sensitive, caring custodian. At the opening of this year’s Adelaide Biennial of Australian Art at the Art Gallery of South Australia, Goldspink seemed to waver on the brink of tears every time he made a speech, which, as guest curator, was pretty frequently. At no stage did he show a trace of cynicism.

For Goldspink, the Adelaide Biennial represents a big step up from his usual activities as an independent curator best known for his work with the Sydney artist-run space, Alaska Projects. The AGSA has brought him on board to identify a new crop of emerging artists and the shape of Australian art in a post-pandemic world. To this end he’s been conscientious, putting the needs of artists ahead of any personal agenda. He’s been willing to include older artists, making it a “trans-generational” show. He’s paid his respects to the South Australian context, the theme of the exhibition serving as a reminder of the state’s origins as a settler colony, not a prison camp. He’s been exceptionally attentive to Indigenous issues.

These are the positives of this 17th Adelaide Biennial but don’t expect any sweeping revelations. Goldspink writes: “This Biennial takes the position that, in times of crisis, the most radical and impactful position an artist can assume is to act idiosyncratically, to hold their course. To be a guiding star in the darkest of nights.” 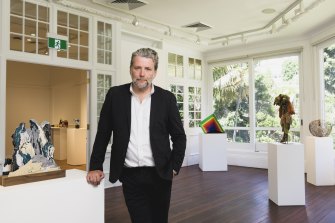 Sebastian Goldspink said the Biennial should be “a guiding star in the darkest of nights.”Credit:Rhett Wyman

This is a terribly romantic way of saying: “Anything goes”. The “idiosyncratic” approach may be a fair reflection of the confused, pluralistic state of contemporary art, but it doesn’t guarantee memorable works. Free/State is the usual blend of the good, the bad and the cryptic. It just feels a bit more sincere this time.

It has been difficult to pull a Biennial together during a pandemic, but the launch was overshadowed by two last-minute tragedies. First was the sudden death of Hossein Valamanesh, who along with his wife, Angela, is one of the senior participants in the exhibition. Next came the accidental death of Neil Balnaves, whose Foundation is the Biennial’s Principal Donor. 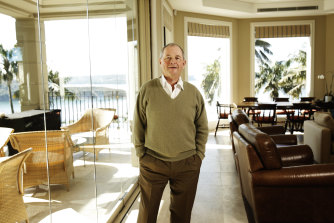 Neil Balnaves at his home in Mosman in 2008.Credit:James Brickwood

Neil Balnaves was, quite simply, one of Australia’s great art patrons – a forthright personality who took a hands-on interest in the events he sponsored. Many galleries and exhibitions – along with other good causes – have benefited from his generosity. In this country genuine philanthropists are rare, and with Balnaves’ demise, rarer still.

In Hossein Valamanesh, we have lost one of Australia’s most versatile and respected artists, a figure who successfully integrated his Iranian heritage with the culture of an adopted homeland where he would spend almost five decades. He and Angela’s contribution to this Biennial was conceived as a compact survey of their careers as solo artists and collaborators. 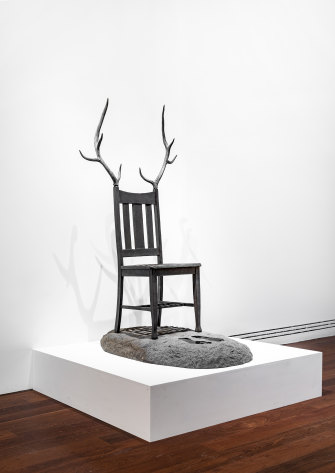 The Valamaneshes’ display is a show-within-a-show, including early work and some of their most recent. It starts with small, relatively modest pieces and expands in a dozen different directions. Hossein would make sculptures, wall pieces, kinetic works, films, and large-scale installations, each with its particular poetry. Angela begins as a potter and goes on to create large, biomorphic ceramic sculptures. Together the couple have created a significant body of public art.

The Valamanesh rooms would have been a highlight of the exhibition under any circumstances but have now taken on an elegiac dimension. They serve as the unofficial heart of this Biennial.

Another work that has assumed an exaggerated significance is Stanislava Pinchuk’s The Wine Dark Sea (2021): an installation of smooth, coloured marble blocks, inscribed with quotations from The Odyssey and lines from reports about Australia’s offshore detention centres. 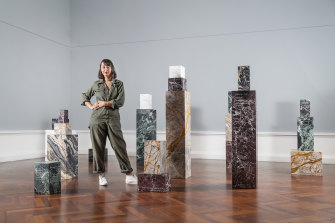 Pinchuk was born in Kharkhiv, one of the Ukrainian cities currently being besieged by Russian forces. By bringing Odysseus’s wanderings in line with those of the refugees who have travelled to Australia by boat, she aimed to make a comment about exile, melancholy, and dislocation. The piece was inspired by Homer’s supposed tomb on the Greek island of Ios, which features a group of stones perpetually being rearranged by visitors. Pinchuk never anticipated that by the time she showed Wine Dark Sea her birthplace would be rearranged into a mass of rubble, and her fellow Ukrainians transformed into the newest wave of refugees.

Pinchuk is a conceptual artist who has hired a professional stonemason to produce components to her specifications.

Positioned by the main entrance it’s one of the first pieces viewers will see and it sets a sombre tone. The actual front of the gallery has been draped in massive, coloured sails by Kate Scardifield. Those who can read such things will tell you it announces an emergency. 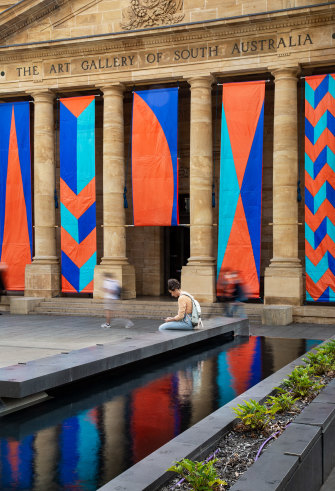 Inside, above the front desk, there’s a piece by Laith McGregor, that contains the word “hope”. In another part of the building the same artist has spelled out “SOS” in bottles attached to the gallery wall. McGregor hails from Lismore, a town that has just been decimated by floods, so he has every right to sound alarmist. His large, fastidious drawings are among the more impressive works in this selection.

With only 25 artists the Biennial is not huge, but it spreads throughout the AGSA like gas, occupying the temporary exhibition spaces and insinuating itself into the Elder Wing. Tom Polo’s big, crude, expressionist paintings are erected like billboards in the midst of Australian historical works, angry brutes breathing down viewers’ necks as they examine some minor colonial masterpiece. Polo’s works aren’t pretty, but their sheer bravura is appealing. Perhaps not so appealing to those whose criteria of quality is: “Would I hang that in my lounge room?” 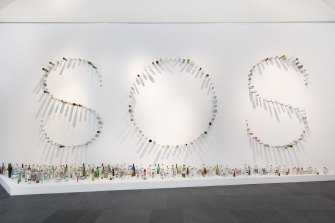 At the other end of the stylistic spectrum, Mitch Cairns has an eye-catching series of paintings filled with flat, decorative motifs. He also has a wall-sized conceptual “poem”, based on the labels found on a group of old photos. While the paintings lend gravity to unassuming details, the wall piece feels like a laborious way of not saying much.

Pitjantjatjara artist, Rhoda Tjitayi, has produced the most whole-hearted paintings in the show, while Indigenous moderne is represented by Reko Rennie, with two long, videos. We watch him driving around in a pink Monaro, late at night, as dreamy music plays in the background. It’s not unpleasant, but neither is it especially profound.

This is more than I can say about Shaun Gladwell’s new video, in which the artist, looking more than ever like Moses, with long grey hair and beard, goes tooling around Melbourne on his BMX. From Goldspink’s words in the catalogue, one gathers that he sees Gladwell as a special artist, but I’m probably not the only person who felt their brain turning to jelly in front of this video. 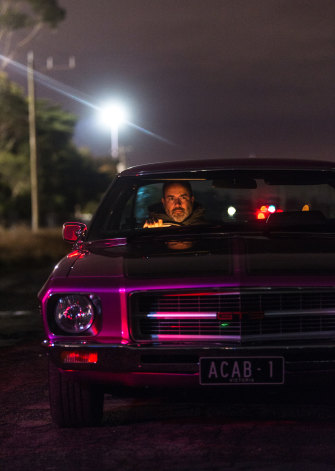 Overall, the artists in this Biennial deal with a bewildering range of themes and ideas – from politics to sport, from mysticism to heritage – but in many cases the ideas behind a piece are not effectively conveyed to the viewer. The onus is on us to learn what it’s all about, and then say “Ah-ha!” That, I’d argue, is a poor way of imagining a work of art, which should be able to arrest and hold viewers without them having to consult a wall label or an essay.

Julie Rrap, now one of the elders in this group, takes a more direct approach, with a multi-channel video installation called Write Me (2021-22), which features 26 images of her own face, laid out like the letters on a keyboard. Viewers are allowed to write a message to the artist, which sets up a reaction on the screens, as corresponding letters are touched. One can only admire Rrap’s bravery in creating so many self-portraits in which she has added years and wrinkles to her own face. It’s simultaneously an embrace and a defiance of the ageing process. In the context of this Biennial, in which the older artists seem to have produced the best, most coherent work, it’s also a testament to the value of experience.

The Adelaide Biennial of Australian Art: Free/State runs until June 5.

John McDonald flew to Adelaide with assistance from the Art Gallery of South Australia.

To read more from Spectrum, visit our page here.