Home » Entertainment » With New Museums, a Once Disgraced Socialite Looks to Burnish His Legacy

CUENCA, Spain — He was once described by Vanity Fair as “a Gatsby for the Reagan era,” but, until recently, life has been quieter for the Cuban-American art collector Roberto Polo.

Polo, a financier whose roller-coaster career included a major art fraud scandal that landed him in prison, has recently resurfaced in central Spain, where last month he defied the coronavirus pandemic to inaugurate a museum in the medieval hilltop city of Cuenca that is devoted to his collection. His first art space opened in 2019, in Toledo, a city that once hosted the Spanish court of the Holy Roman Empire.

For Polo, the museums are a chance to establish a legacy and draw a line under his checkered past.

Polo’s museums are both located in the region of Castilla-La Mancha and stem from an agreement between the collector and the region’s government. In return for a 15-year loan of 445 items from his collection of modern and contemporary art, the authorities agreed to exhibit the works, insure them to a value of about $425 million, and provide a personal home for Polo in Toledo. 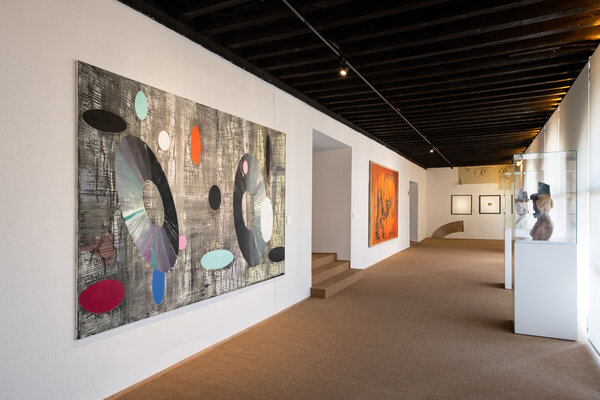 A large portrait of Polo stands at the entrance to the Toledo museum, and the explanatory panels summarize his life and achievements, from his birth in Havana in 1951 through his finance career, in which he helped Citibank set up a fine-arts investment department that the text calls “the first of its kind in the history of the banking industry.”

But no reference is made to the shadier episodes in Polo’s past. Once celebrated in the United States as a socialite and cultural patron, in 1988, Polo became a fugitive from justice and the target of a $130 million art fraud lawsuit. He was eventually detained in Italy and spent four years in prison. Polo also divorced his Dominican wife, Rosa Suro, who used to wear jewels that he collected, but whom he later accused of siding against him in the fraud case.

“My life is not linear, that of a bourgeois,” Polo said during the museum presentation. “This legal story happened 30 years ago and I believe in the right to forget.”

Polo is now remarried to Michel Mora, a Frenchman who became his assistant two decades ago. While Polo’s agreement with the Spanish authorities was for a loan of the artworks, he said that he expected Toledo to be his final place of residency. “My intention is that these works will not leave Spain,” he said.

Polo’s museums are run by a private foundation that receives an annual budget of 2 million euros, about $2.4 million, from the regional government. Before moving to Toledo, Polo spent a decade in Brussels, where he had an art gallery, and Belgian artists account for 40 percent of Polo’s Spanish collection, according to his foundation’s director, Rafael Sierra.

But there are also works by famous painters like Vasily Kandinsky, Max Ernst and Laszlo Moholy-Nagy. In the Toledo museum, a striking wood and ivory sculpture faces a bay window that overlooks the Tagus, the river curling round the city. This work, “Grotesque III,” by the Bauhaus sculptor Oskar Schlemmer, is also the most valuable item in Polo’s Spanish collection, insured for €30 million.

Polo said his museums only exhibited a tiny fraction of the 7,000 works he owns, most of which were in storage.

In fact, his museum footprint in Spain could increase. In October, the mayor of Alicante, in eastern Spain, suggested creating a third home for some of Polo’s collection.

Spain’s museums have bolstered the tourism industry, but their proliferation has included some setbacks. Taking example from the successful 1997 opening of a Guggenheim museum in Bilbao, several Spanish cities tried similar projects, some of which were never finished, or hardly used.

Some regional and city governments have provided the infrastructure but turned to private collectors to supply the works on show. A museum in Cáceres, in western Spain, opened in 2010, exhibits the collection of Helga de Alvear, for example; another, in Málaga, in the country’s south, focuses on Spanish paintings owned by Carmen Thyssen, the widow of Heinrich von Thyssen-Bornemisza, a baron whose own collection occupies one of Madrid’s main museums.

In Toledo, Polo’s works are exhibited in the renovated convent of Santa Fé; the region spent €1.2 million so that the building could accommodate the collection. The Cuenca museum, in a former church, is significantly smaller, although the authorities express hope that it will eventually move to a larger building. Cuenca already hosts an outstanding museum of abstract Spanish art, collected by Fernando Zóbel, a Filipino painter and businessman.

But not everybody has shared the enthusiasm of legislators for using public funds to showcase private foreign collections.

“I have nothing against Mr. Polo,” said Norberto Dotor, a retired gallerist who ran spaces in Madrid and Castilla-La Mancha, “but I cannot accept and understand how our politicians could present this as a gift.”

“What we needed from our politicians was a regional art center showcasing our own cultural history and artists, rather than spending taxpayers’ money on helping a private collection,” Dotor added.

Ángel Felpeto, who was the region’s culture minister when the museum deal was signed with Polo, acknowledged that “some people felt that Toledo and Cuenca already had much to offer to visitors and that having more museums would not add a lot.” But he argued that Polo’s collection “filled an important gap in terms of European modern and contemporary art, not only for our region, but for Spain as a whole.”

Concerning Polo’s past troubles, Felpeto added: “His judicial problems were long over and what mattered to us was the valuation and characteristics of the works he could offer us.”

Despite managing to rebuild an art collection after leaving prison, Polo said that he had regained nothing like the wealth that he once boasted, and would not benefit financially from the museums in Spain.

“I’m a terrible businessman,” he said, with a wry smile.