While many people gained weight during the lockdowns, others have used the change in routine to eat better and exercise more. 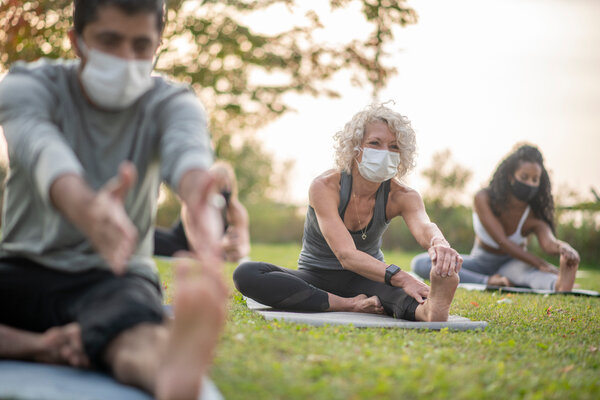 It’s been somewhat of a running joke in a profoundly unfunny time: endless laments about the “quarantine 15” or “Covid 19,” referring to the number of pounds gained during lockdown.

According to a June survey of 2,000 American adults by the weight loss program Nutrisystem, 76 percent of respondents gained weight, up to 16 pounds, between mid-March and July. And 63 percent said that losing weight was a priority, post quarantine.

The difference between losers, gainers and maintainers during the pandemic, experts say, is largely dependent on your mind-set: how you approach a new set of circumstances and cope with change.

One of the many challenges of Covid was the abrupt change to day-to-day schedules. People began working from home, if they had work at all, in many cases joined by their kids. Gyms, recreation centers and parks closed, curbing exercise routines. Stress levels skyrocketed for many, with baking, eating and drinking becoming major outlets and means of reward. Indeed, studies show a link between high stress levels and overeating.

“When the environment and your routine changes, you can use it as an opportunity to say ‘I’ll drink at home,’ or ‘I deserve to treat myself well in those really tough times,’” said Gary D. Foster, chief scientific officer of WW (formerly Weight Watchers). “This is where mind-set is so important. It’s how you view things, how you position the situation, your sense of self-worth, and how you treat yourself.”

“After that initial period, there was a subset of people who said, ‘This is an opportunity to take care of myself,” he said. “That different way of thinking about the process is really powerful.”

Susan Abrams Torney, 62, a dental office manager in Delray Beach, Fla., had an epiphany early on in the pandemic when she realized that she could use the time off from work to make a positive change in her life. Sheltering in place worked in her favor. “It took the ‘I don’t have time to exercise’ excuse out of the equation,’” said Ms. Torney, who has lost 30 pounds since the beginning of the year.

She credits her grandchildren with motivating her. “Before I started on the journey, if I sat on the floor I felt like I needed a crane to get me back up again,” she said.

During lockdown, she finally broke open the Wii video game console her children had given her for her 50th birthday and started playing Wii tennis and also going for “sanity” walks with friends around her community her only form of in-person socialization.

It also helped that she was no longer able to go out for meals and had to cook at home, where she prepared healthy meals for herself, like chicken, fish and salads. Rather than vodka on the rocks, her previous cocktail of choice, she diluted her vodka with mineral water and a splash of cranberry juice. “Quarantine gave me time to be creative with the meals I was eating,” she said.

Another reason many people gained weight is that they stopped planning their meals in advance. Without planning ahead, they would just grab whatever was available.

“Before shelter in place they would prep their meals and sort of had a plan,” said Dr. Rami Bailony, the co-founder and chief executive of Enara Health, a digital membership weight loss clinic. “Once Covid hit they thought they could cook something up that was healthy. But once you’re thinking about eating in the moment you tend to go with what’s expedient.”

When the pandemic started, Mindy Bachrach, 58, a home health occupational therapist in Henderson, Nev., soothed herself with sugary and high fat foods. As an essential worker, she was working pretty much all of her waking hours. “I have a weird job, I eat in my car all the time,” she said. “If I don’t prepare very carefully, I end up getting fast food, which I don’t even like.”

After two weeks, her pants were tighter. As someone who had lost and regained dozens of pounds in her life, she panicked. “I decided I had to do something,” she said. “If I didn’t, things were going to get out of control.”

She went on the Whole 30 plan, which eliminates processed foods, sugar and sugar substitutes, alcohol, grains, dairy and most legumes. She also stopped weighing herself. “I wanted the focus to be on how foods made me feel and not weight loss itself,” she said. Thirty days later, she stepped on the scale and was down 20 pounds.

Randy Garcia, 42, of Dallas, has lost 104 pounds since July, 2019, with the help of Enara, which connects members with a doctor, dietitian and exercise coach and costs $400 a month.

Mr. Garcia, who once weighed 400 pounds and works in I.T., said his usual pre-Enara ritual included trips to Chick-fil-A or McDonald’s with his wife and three kids. That became impossible as the lockdowns spread, so he began cooking at home. “It’s been an experimental process,” he said. “You have no options, so you have to do this.”

Mr. Garcia had tried everything from injections of human chorionic gonadotropin, or HCG, to a Keto diet to lose weight. He would, but it invariably crept back. Finally, he had enough and tried Enara, which his insurance mostly covers.

“I needed to do something because my kids look at me as a role model,” he said. “I don’t want to look in the mirror and keep saying ‘I have to do something about this’ or go into a store and not being able to find a size that fits me.” The lack of options also helped Leeanne Owens, 52, who has lost 18 pounds since the end of May through intermittent fasting and calorie counting. When Covid first hit, she ate whatever she wanted. “I stopped caring and just resolved myself to the fact that I was no longer young, attractive or in shape and somehow that was OK,” she said.

Then she stepped on the scale, and the higher-than-ever number made her do an about-face. Rather than not care at all, she decided to use the time to start caring the most.

“I decided, since I am shut in at home, why not take this time to live the type of lifestyle I have never really been able to tap into — the ability to work out over lunch on my Peloton, the ability to stop eating at a certain time for intermittent fasting,” Ms. Owens, who works for a technology consultancy firm in Boston, wrote in an email.

Without the 40-mile commute each way from her home in a Boston suburb into the city, she had an extra three hours a day to focus on exercising and healthy cooking. Plus, office temptations — food-laden birthday celebrations and jars of candy resting on colleagues’ desks — no longer existed.

“I started to think of weight loss — the effort and ultimately the results — as a transformation, changing the traits and toxic thinking anchoring me down, doing the work privately, without judgment, without having to worry about trying to find something healthy at lunch time at the office, without having my appetite triggered by someone bringing lunch to their cube at 11 a.m., without the constant snacks, team drinks, all of that,” she said.

She also cut back her alcohol consumption. “This time I feel it’s different. I am doing this for me. I set the rules and I break them too, and that is really OK with me.”